The popular meteorologist, who regularly appeared as a guest on Ross Stevenson and John Burns' radio show, has revealed she was recently told her services were "no longer required". Bunn presents the weather on Seven News Melbourne.

Rival broadcaster, Nine, has recently been consolidating its ownership of 3AW and sister station 2GB. 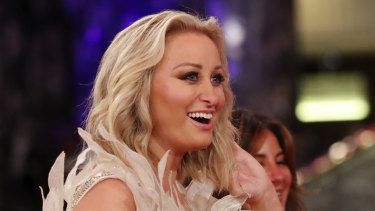 "I've just been told that after five years delivering Melbourne's weather on … 3AW that as of now I'm no longer required," Bunn told her 20,000 Twitter followers. "You can still catch me at 4pm and 6pm on Melbourne's Seven News."

Nine has been putting its stamp on 3AW ever since the broadcaster took over full ownership of parent company Macquarie Media. Earlier this month, Nine revealed it was dropping the Macquarie Media brand name to draw more attention to each radio station's callsign. However, for corporate purposes the various stations will collectively be referred to as "Nine Radio".

Last year, there were whispers Nine would remove rival talent from regular guest roles at 3AW and 2G in favour of its own presenters. Radio employees have also been told there will be opportunities for them to work more closely with their TV colleagues and that newsrooms will share some resources.

At 3AW, the Nine news stinger now plays at the start of news bulletins. And at Sydney's 2GB, Nine's former Today co-host Deborah Knight has taken over from afternoons host Steve Price.

It is not yet known if a Nine weather presenter will be parachuted into Bunn's former guest spot. Nine, the owner of this masthead, has been contacted for comment.

Will Prince Harry & Meghan Markle Be On ‘The Crown’? Netflix Is Reportedly Interested

Get Ready: Aquarius Season Will Have Your Social Life Thriving

Dear Mary: How can I help my wife quit drinking for good?

Tom Hanks Once Again Steals the Show at 2020 SAG Awards