SPACE start-up Astra has seen its first test rocket come crashing back to earth after flying for just 30 seconds in Alaska.

The rocket – which veered off course and catapulted to the ground – was a bold new launch by California start-up Astra Space Inc. 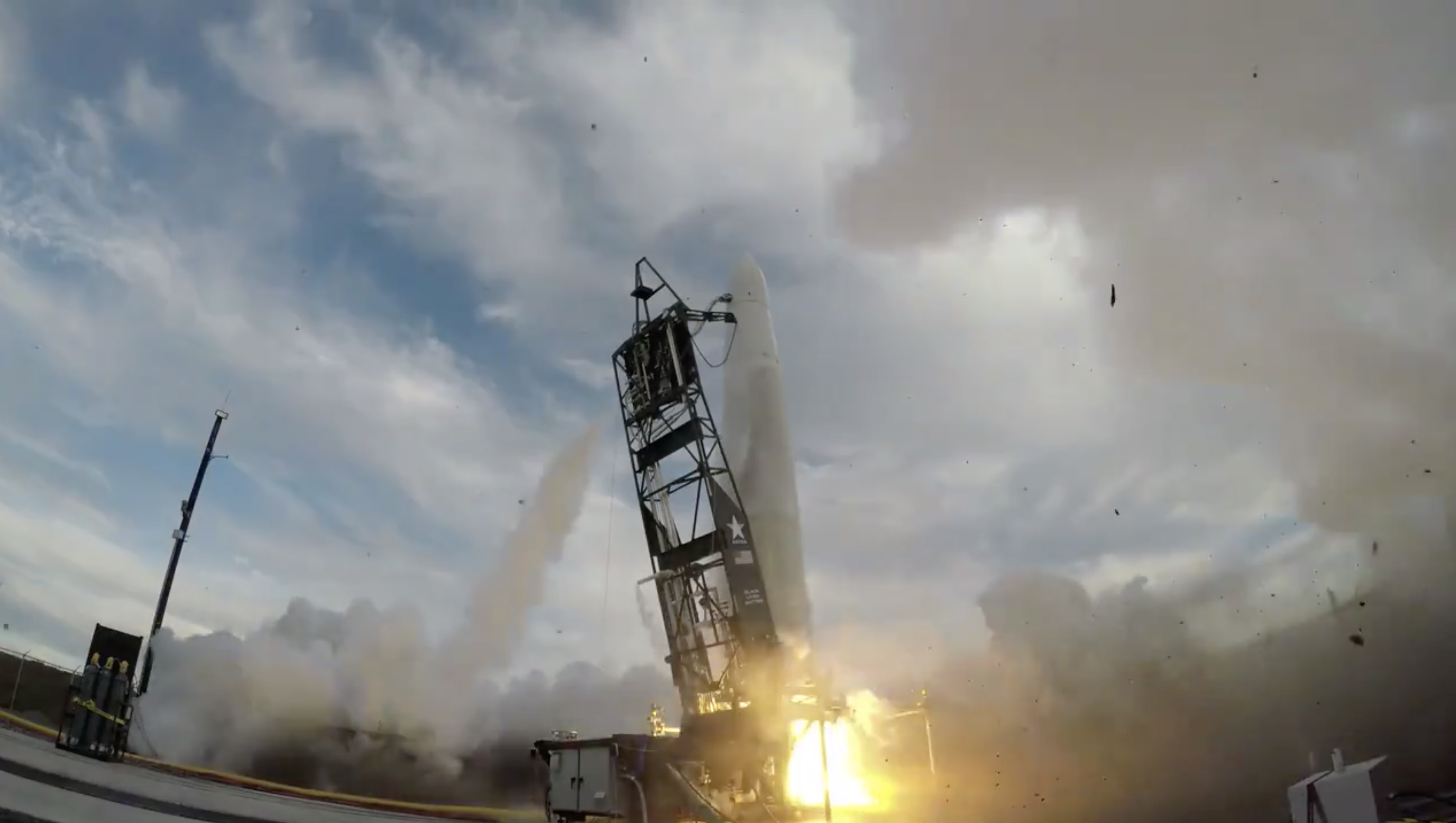 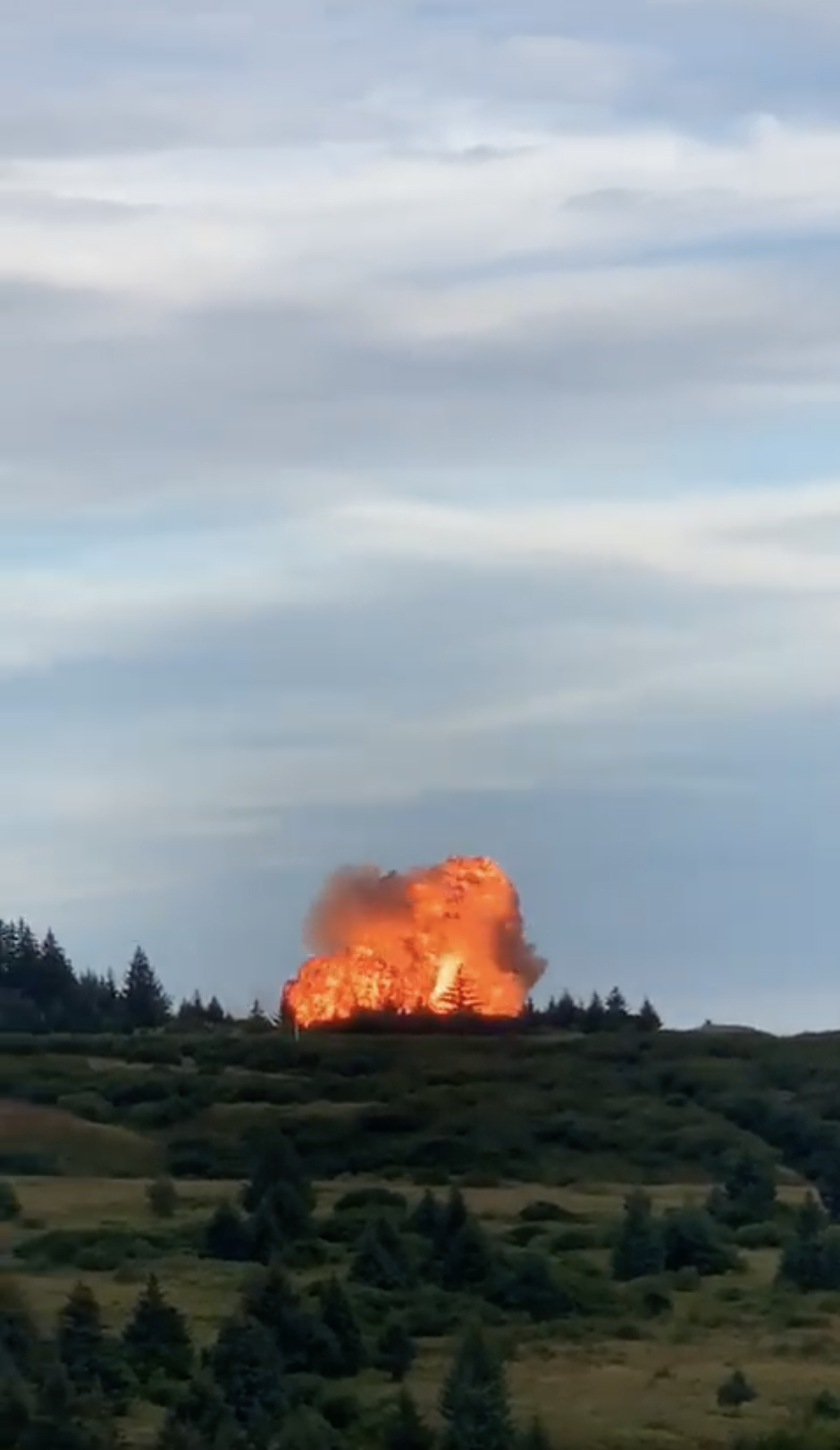 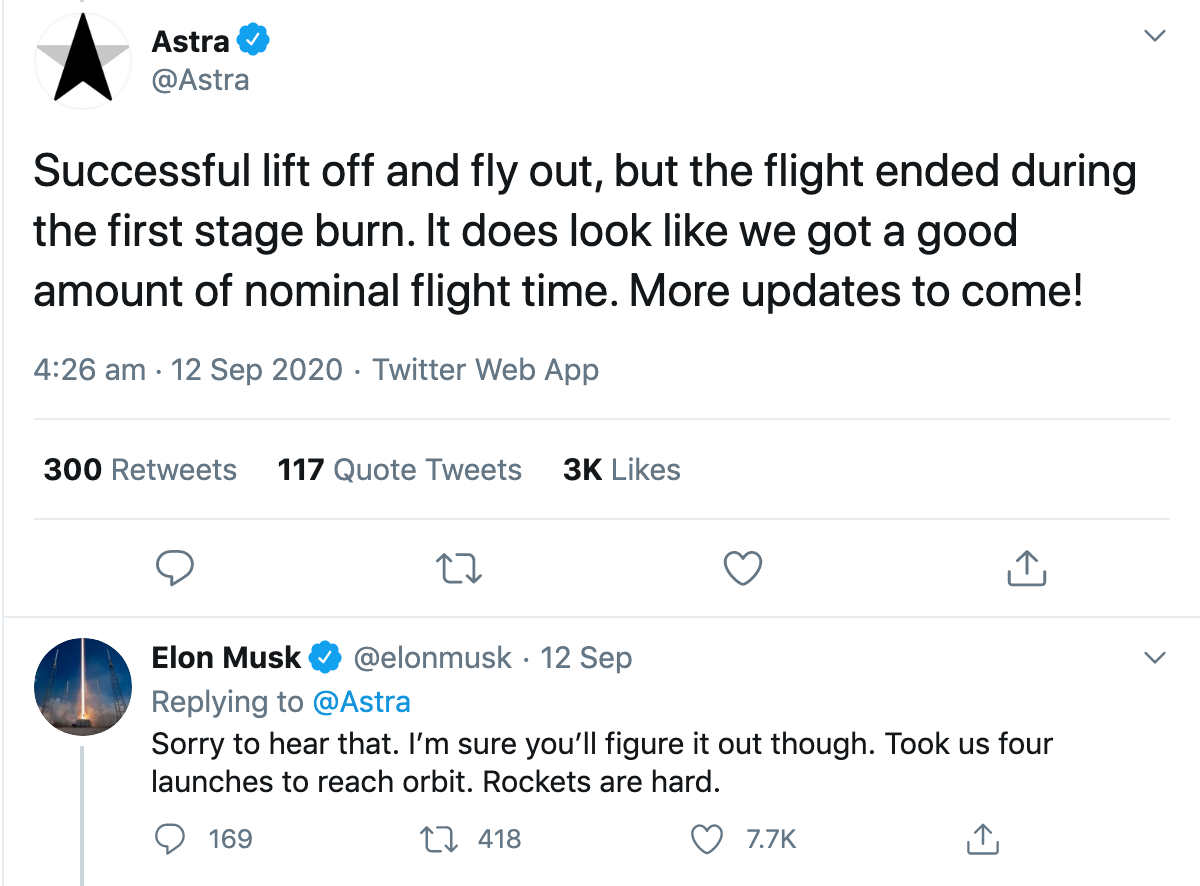 The 38-foot-tall rocket took off from the Pacific Spaceport Complex in Kodiak, Alaska, at 7.19pm Friday and flew for about 30 seconds before it hit the ground in a fiery explosion.

"Successful lift off and fly out, but the flight ended during the first-stage burn. It does look like we got a good amount of nominal flight time. More updates to come!" Astra tweeted.

Astra is among a number of space start-ups working to create small, low cost rockets that can be sent into orbit on a daily basis.

However, teething issues including problems with sensors meant the flight was not a complete success.

"As we’ve always said, we expect it to take three flights to make it to orbit," the Astra team said in a blog post Friday.

"We are incredibly proud of our team; we will review the data, make changes and launch Rocket 3.2, which is nearly complete."

Musk offered his support on Twitter, saying: "Sorry to hear that. I'm sure you'll figure it out though.

"Took us four launches to reach orbit. Rockets are hard."

The founder and CEO of Rocket Lab – the only company that has managed to conduct successful commercial flights – also shared encouragement.

"Data in this game is so hard won, so big congratulations to the team for pulling down actual flight data from today's attempt!" Peter Beck tweeted.

Astra said the goal for the first flight was to achieve a nominal first-stage burn and although that didn't happen, the company said that it did gain valuable insights going into the second attempt.

"We didn't meet all of our objectives, but we did gain valuable experience, plus even more valuable flight data," a blog post read.

"This launch sets us well on our way to reaching orbit within two additional flights, so we're happy with the result."

Astra co-founder and CEO Chris Kemp praised the launch, saying that systems worked as expected and fed information back for engineers to plan the next flight.

"Obviously, it didn't do everything we wanted it to, but it launched, and we got a ton of great data," Kemp said.

"We learned things that we would not otherwise learn unless we flew."

Referring to the crash, he said: "Our rocket doesn't have any toxic propellants … It is quite a benign thing environmentally."

Astra says they aim to build a space company "unlike any other".

"Our goal is to reshape how the space industry works, starting with how we get there," their website reads.

"By offering smaller more frequent launches, Astra will enable a wave of innovation in low Earth orbit and improve life on our planet through greater connectivity and more regular observation."

Astra had hoped to be further along in the trial process but bad weather and the pandemic has caused delays.

It's second rocket is waiting to launch in a few months time as engineers analyze what went wrong with the first launch.

"We’ll be back to the pad before you know it!" the team said. 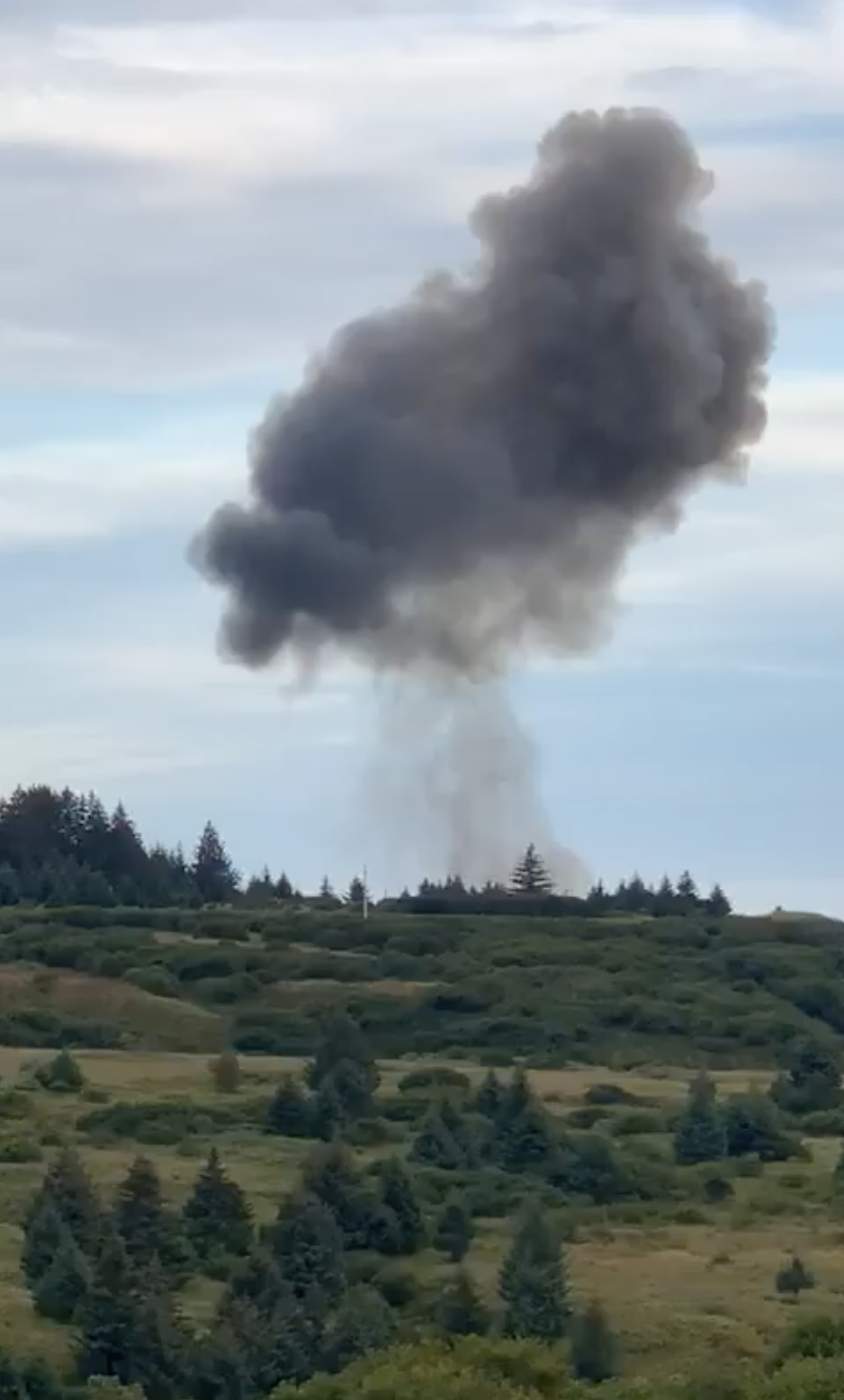 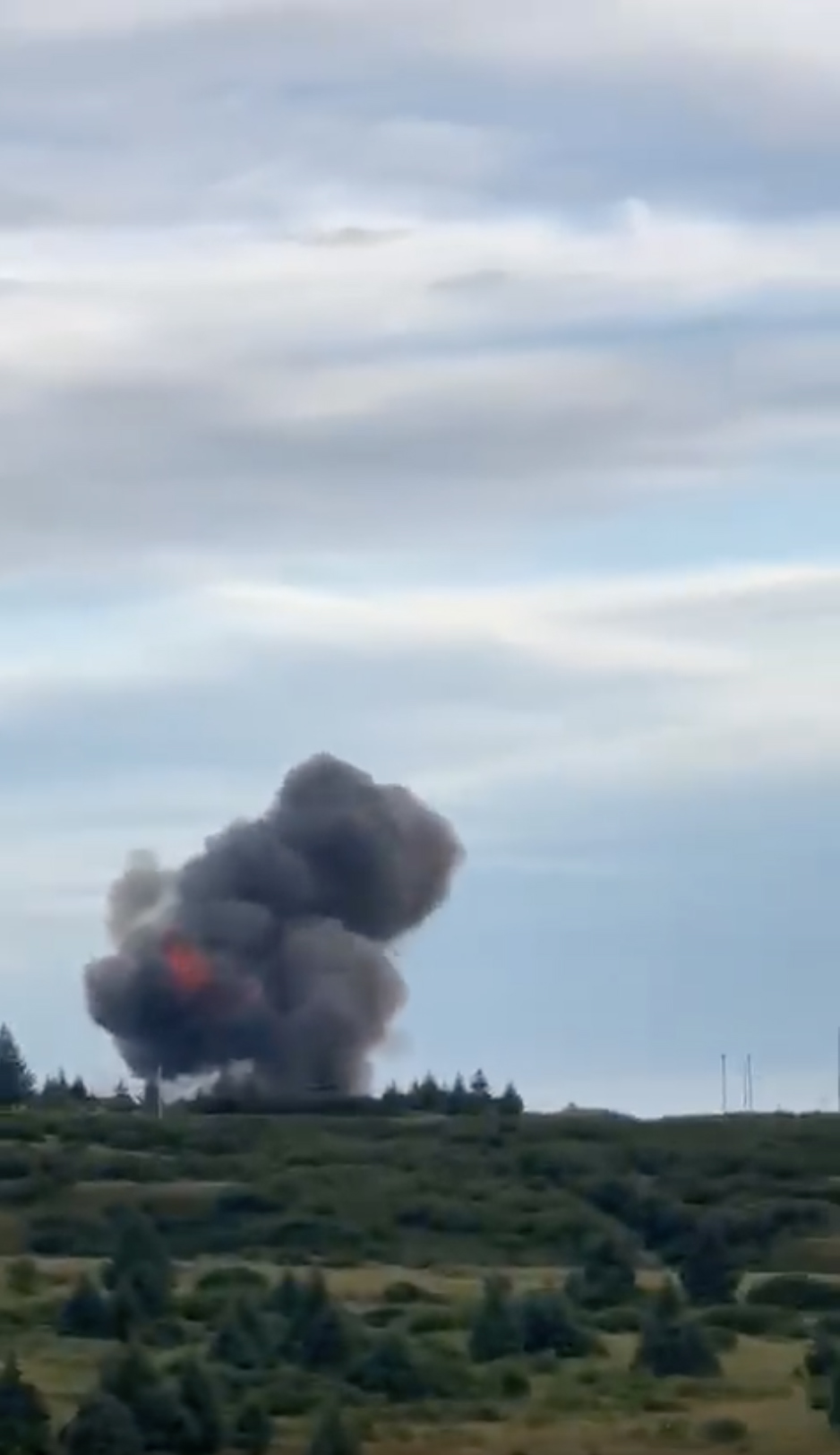 Astra, firs, sees, Space, start-up
You may also like:

These Airbnb Holiday 2020 Online Experiences Belong On Your Christmas Wishlist

‘The Undoing’ On Track To Become The Highest-Rated New U.S. Series On Sky Atlantic