Officials initially said the incident on Tuesday ― which left six people dead, including a police officer ― did not appear to be a hate crime and that the shooters entered the Jewish market at random.

“On the video, they parked the van, they exit the van with the long guns in their hands and immediately began firing toward the location,” Shea said, adding that the shooters “bypassed” other bystanders and shot into the market.

Officials identified the shooters as David Anderson, 47, and Francine Graham, 50, during a press conference Wednesday afternoon.

Anderson appears to have been linked to the Black Hebrew Israelites, a movement in which groups of Black Americans claim to be direct descendants of the ancient Israelites. Various sects exist within the movement with some offshoots holding anti-Semitic views. It has no connection to mainstream Judaism.

Anderson posted anti-Semitic and anti-police posts online ahead of the shooting, reported the Times, citing a law enforcement official familiar with the investigation.

Investigators found a note with apparent religious writing inside the U-Haul van the suspects drove to the market, reported NBC New York and the New York Post. They also found a live pipe bomb inside the van, according to the Times.

Shea on Wednesday stopped short of calling the attack “anti-Semitic” and said the shooters’ motives are still being investigated.

Before the shootout at the market, the two assailants fatally shot Seals at a cemetery about a mile away. He had approached the suspects because they were sitting in a U-Haul van that was linked to a recent homicide, reported the Times. The shooters then drove to the market, where they opened fire.

As of Wednesday morning, officials had not publicly identified the attackers or the victims inside the market. Jewish leaders identified two of the victims as Mindel Ferencz, the 33-year-old wife of the market’s owner and mother of three, and Moshe Deutsch, a 24-year-old rabbinical student.

As hundreds of rounds of gunshots rang out, 40 children were huddled inside a yeshiva located in the same building as the market, the Anti-Defamation League told HuffPost.

“What happened to those children ― they’ll never be able to erase that,” said Evan Bernstein, ADL’s regional director for New York and New Jersey.

Roughly a dozen schools in the area were on lockdown for hours during Tuesday’s shooting spree in Jersey City, which is situated to the west of Manhattan across the Hudson River. It’s the state’s second-most-populous city with a population of about 270,000.

Oren Segal, director of the Anti-Defamation League’s Center on Extremism, told HuffPost that the Black Hebrew Israelite movement has many sects, not all of which are anti-Semitic or hateful.

“But there are offshoots,” Segal said, “whose followers believe that white people are agents of Satan, that Jews are liars and false worshippers of God, and that only the Black Israelites are the true Jews, and that they are racially superior to whites and other ethnicities.”

Segal noted that Black Hebrew Israelites are “generally not the most violent movement per se, not like white supremacists or Islamic extremists.”

Still, Segal added, there was a concerning incident in October in Sunny Isles Beach, Florida, when a 66-year-old Black Israelite named Larry Greene, who identifies himself by the Hebrew name Elijah Israel, allegedly attacked two Jewish men outside a synagogue with a knife. According to police, Greene (or Israel) yelled anti-Semitic remarks, telling them to “go back to Israel” and calling them “fake Jews.” 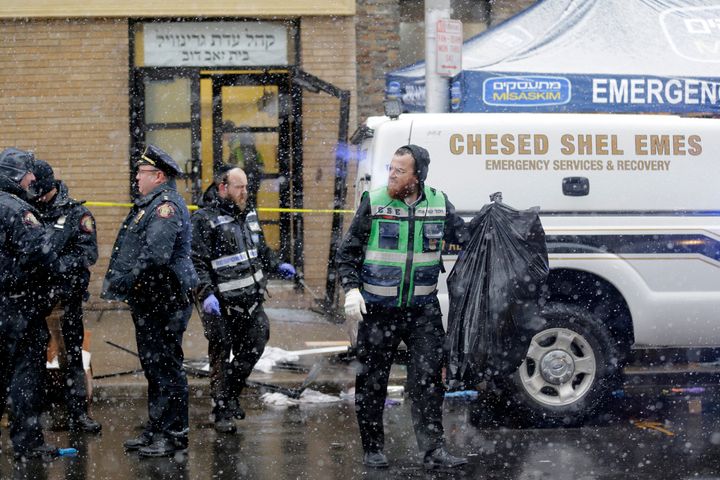 It’s likely more people would have been killed in the shooting had it not been for two officers on patrol a block away who heard the gunfire and immediately responded, Fulop said Wednesday.

“The reason that those perpetrators seemed to be inside that deli and not able to move potentially to the school or to inflict more harm was because the police responded immediately and returned fire,” the mayor said.

“This was a premeditated violent anti-Semitic hate crime,” he said during a press conference, adding that NYPD officers have been placed on “high alert” following the shooting.

This is a developing story. Check back for updates.