Student, 18, who already owns SEVEN supercars worth £500K and spends £6,000 a MONTH on food moves in with a family-of-four scrimping by on shopping budget of £50 a week in Rich Kids Go Skint

A student who is given at least £10,000 a month spending money by his millionaire parents has experienced life on a budget for the first time in Rich Kids Go Skint.

Daryl, 18, who lives in a palatial apartment in London’s Belgravia thinks nothing of spending £1,000 on a night out and admits to blowing an average of £6,000 a month on eating out.

Currently studying for his A-levels Daryl passed his driving test a year ago and in that time has built up a collection of seven supercars with an estimated worth of half a million pounds.

But in the latest episode of 5Star’s documentary Daryl trades his luxurious livelihood to experience life on the breadline.

In tonight’s episode the teenager moves in with married couple Daniel and Letitia who live in Barnet with their two children Romeo and Casanova. 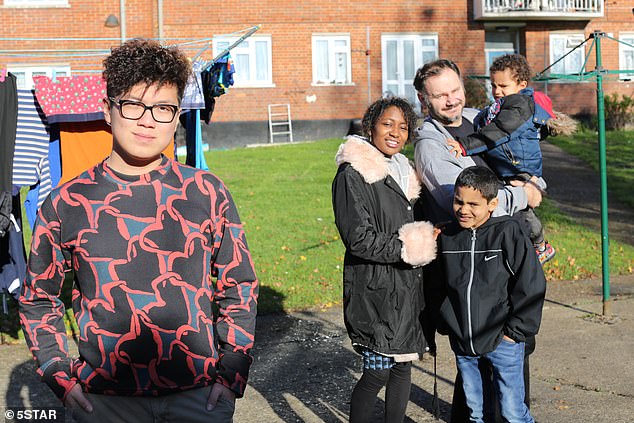 Daryl, 18, is given around £10,000 a month by his millionaire parents, in Rich Kids Go Skint he moves in with Letitia, Daniel and their two children Romeo and Cassanova who have £850 a month to get by

Daniel who is originally from Poland is currently studying and Letitia is almost completely housebound due to social anxiety meaning the family have to survive off benefits of just £850 a month.

Speaking to his friend Poppy ahead of his stay Daryl admits that he is ‘nervous’ and doesn’t plan to do any chores.

He adds: ‘If they ask me to do that I’m just going to be like let’s call the help.’

Armed with a gift of a croquet set and luxury caviar Daryl makes his way to North London where he is given a tour of the family home.

Shown where he will be sleeping, on a sofa bed in the living room Letitia asks Daryl about his own living space.

He says: ‘Well we have a drawing room and an informal sitting room upstairs where we will have drinks before dinner. Then we go into the dining room for a meal.’ 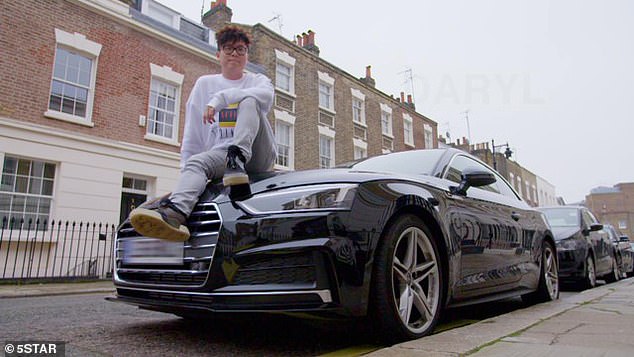 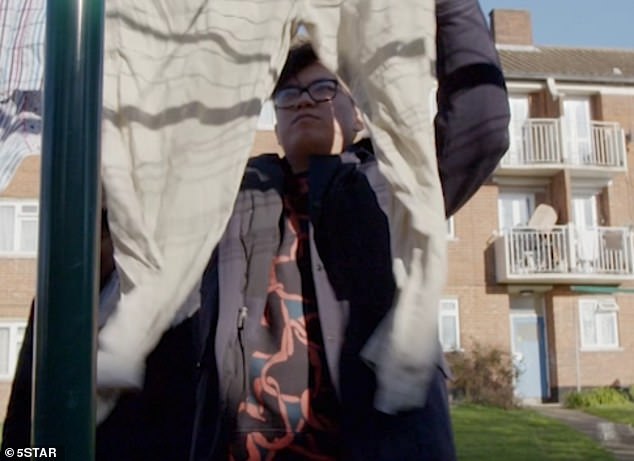 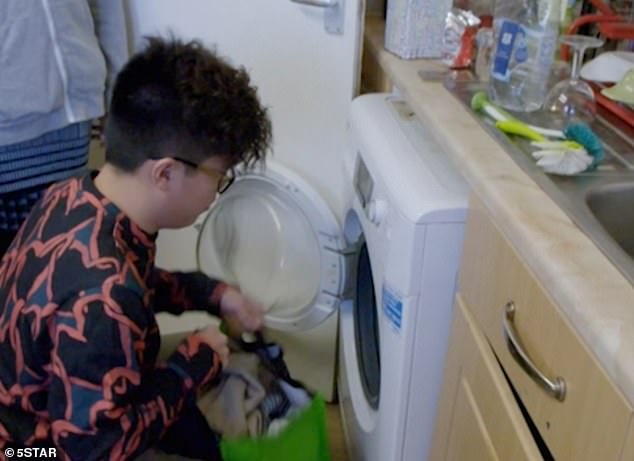 After discovering that Daryl’s wallpaper cost £500 compared to their £2 charity shop roll the mother-of-two is keen to find out where the teen gets his money.

He explains: ‘Because my parents work abroad they give me money when I ask for it, I sort of have a small amount of money from my trust put into my account to pay for whatever I want.

He adds: ‘I love food more than anything else I could eat and eat and eat all day. I do admit that I do have some expensive taste, in the previous month I spent £6,000 on food.’ 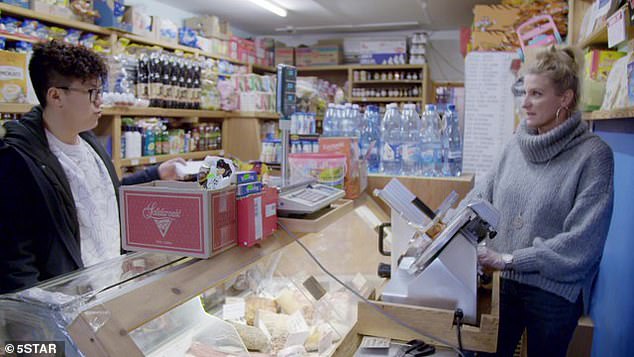 Daryl admits he usually spends around £6,000 on food for himself a month, but is given just £15 to whip up a meal for the family who have a food budget of between £50-£80 a week. Pictured: Darly purchasing ingredients in the Polish supermarket 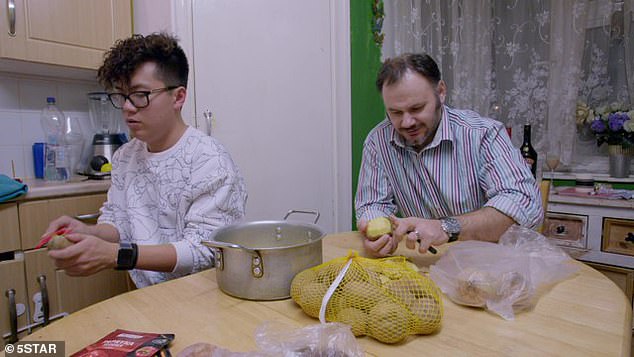 Father-of-two Daniel reveals that this is a meal that could last the family a total of three days, an alien concept to Daryl who admits he never eats leftovers

Daryl learns that Daniel and Letitia have a food budget of £50-£80 a week for all four of them which gives him some food for thought.

Describing the family budget as ‘insane’ Daryl says: ‘I feel really bad about the whole situation of how they struggle with the bills the health and everything.

Daryl is faced with his first task when he is given a £15 budget to buy the ingredients to cook a Polish casserole for the family.

Surprisingly the teen comes in under budget spending just £11.62 in the Police supermarket and producing a dish which Daniel admits is ‘better than his.’

The father-of-two reveals that this is a meal that could last the family a total of three days, an alien concept to Daryl.

He says: ‘I don’t like to eat left overs just the idea of heating it up doesn’t real appeal to me.

‘Sometimes the maid does (eat the leftovers) but other than that we wouldn’t so two to three days of the same thing… I wouldn’t be able to do that at all.’ 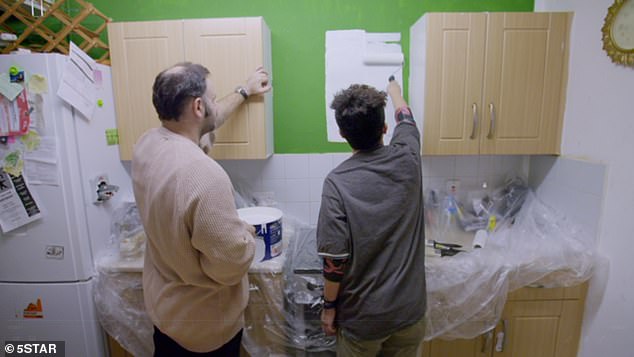 The next morning Daryl is faced with the prospect of chores, including helping Letitia to hang the laundry on a clothesline, which proves unsavoury to the teen.

He explains to Letitia that laundry in itself is not something he has dealt with as his matron would do it at school while his maid deals with it at home.

The teen does break the rules when Daniel presents him with £15 to buy fish and chips as a Sunday treat for the family, adding £9.70 of his own money to bulk out the order.

As his time with the family comes to an end Daryl admits that the family’s struggles has put his life into perspective.

‘It’s just relieving to know that I have a safety barrier and a safety net to catch me when I fall’ he says.

Before he leaves he gifts the parents an annual pass to the Natural History Museum before offering to pay for the wallpaper of their choice.

Reflecting on his experience he says: ‘It gave me a really in-depth understanding of their everyday life and how it can be a struggle.

‘It definitely made me think about my life choices and how I should cope with my money instead of spending it.

‘The fact that we had this experience was amazing, it was a fun time.’

Rich Kids Gone Skint is on tonight at 9pm on 5Star

£10K, bud, monthly, swaps, Teenager
You may also like:

What Life Is Really Like for Royals Without Official Titles