Follow
Home » Lifestyle » The Art of Joy: Secrets From Some Of The Happiest Black Women We Know

With the end of the year finally in sight, we must admit that 2020 was a lot to bear. The COVID-19 pandemic and its subsequent life-changing fallout brought so many Black people to their emotional limits. Yet we came together, as resilient Black women often do. We grasped at every opportunity to infuse more happiness into our daily routines—like gardening, exercising, meditating and dancing—and began to recenter the conversation around our collective pursuit of happiness. To help you stay inspired, we called upon four women whose “joy breaks” make us smile. Here, they share how they carved out their personal paths to peace in 2020.

The Art Of Connection With Danielle Brooks

For actress Danielle Brooks (Orange Is The New Black), 2019 ended on an ultimate high note when she welcomed her first child, Freeya Carel, into the world on November 16. She kicked off this year with more great news, announcing a surprise New Year’s Eve engagement to fiancé Dennis Gelin. During an ESSENCE Yes, Girl! Podcast interview in Los Angeles back in February, Brooks glowed as she recounted the joys of motherhood and her career-making turn on the hit Netflix show. She was booked and busy and feeling very blessed. A month later, the pandemic stopped the world—and like so many, Brooks struggled to adjust to our new reality. “This year was probably the hardest time for me to hold on to joy,” she says. “I’ve been searching for ways to keep that in my wheelhouse all year, and it’s been very, very difficult.” To get there, Brooks journaled, listened to God, cooked more and held her family closer. In the process, she found clarity, new perspective and hope. “I’m starting to redefine where my joy comes from, and for me it is rooted in family, friends and memories,” she explains. Not being on set for months gave Brooks, 31, more time at home with baby Freeya. “She started walking,” Brooks gushes. “I got to catch her in my arms. I got to see all of these incredible milestones—to hear her say ‘mama’ for the first time. I didn’t think I was going to get to experience them. It’s been really, really wonderful.”

As Brooks bonded with her baby girl and focused on self-care, it wasn’t lost on her that 2020’s tough news cycle highlighted the challenges Black parents in America face. “It’s really hard when you’re raising a Black child,” she says. But Brooks turned that pain into fuel to keep moving forward. “All of us new mothers or new papas with babies—we can contribute, by the way we raise our children, to making a better world.” That new-mama tribe Brooks speaks of certainly helped to hold her down this year too. “I would not have been able to do this without other mothers,” she says, crediting the love and support from fellow actresses and new-mom friends Raven Goodwin and Jodie Turner-Smith with helping her stay calm. “I’m leaning into the hope that Freeya, and all our children, can truly be that change we need.”

The Art Of Giving With Tabitha Brown

“Well, hello there.” If you relied on social media to distract you from 2020’s rocky emotional twists, then that catchphrase is most likely a favorite already—because it’s one of the many that bubbly online sensation and vegan cook Tabitha Brown, 41, used daily to greet her millions of dedicated followers as she comforted them through these unprecedented times. 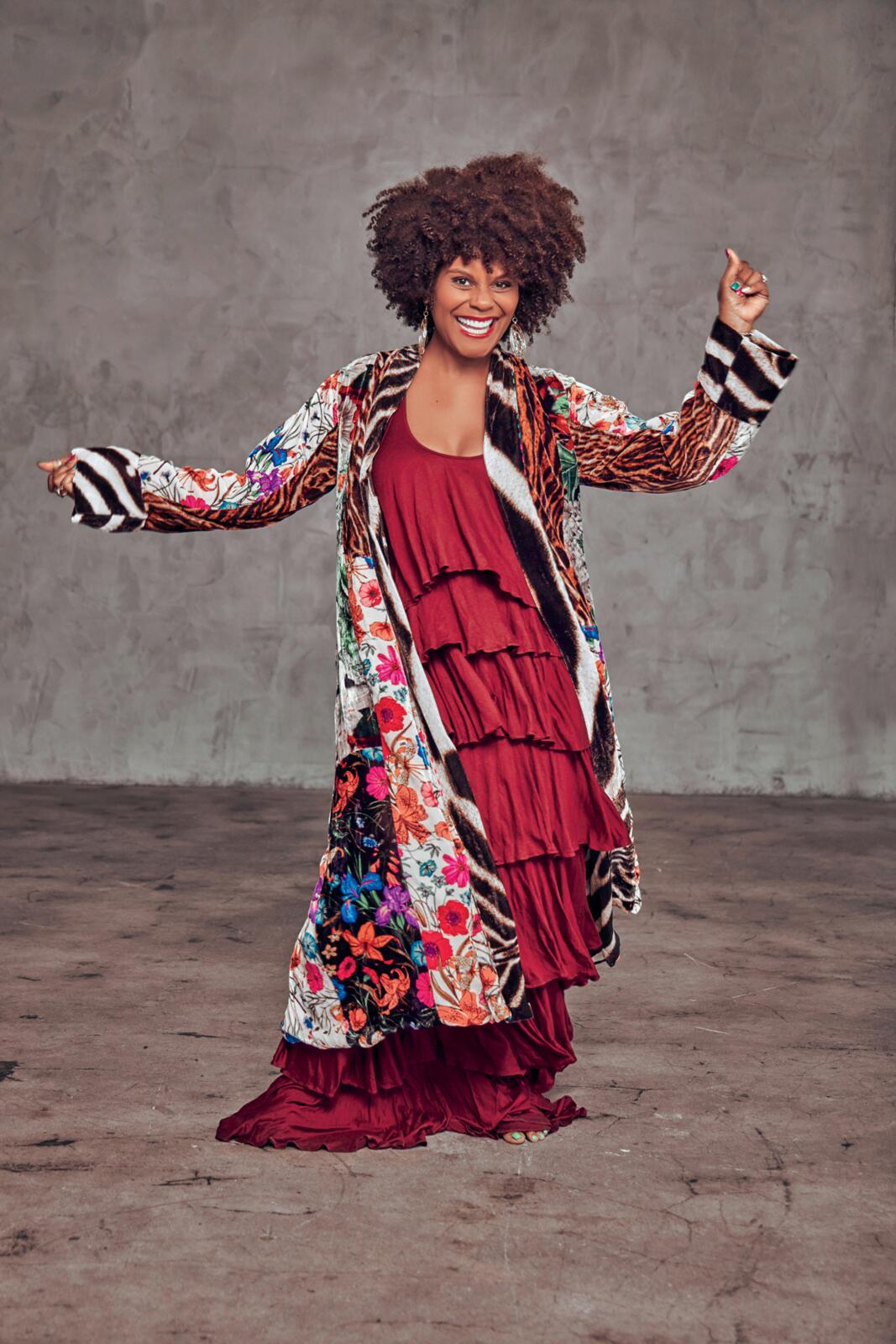 For Brown—an aspiring actress who lives with her husband and kids in Los Angeles—food has always been a love language. “It’s how I take care of my family,” she says. “I feed them.” Becoming a vegan saved Brown after a mystery health scare that left her weak and constantly feeling ill. Now she’s fulfilling what she believes is God’s purpose for her life: teaching others about the benefits of living a vegan lifestyle, one short feel-good how-to video at a time. When the pandemic hit, Brown’s infectiously warm energy and delicious vegan tricks had millions of fans tuning in to her feeds, eager for a cyber-seat at her family table.

Now the Internet is collectively obsessed with this joy evangelist, whose positivity comes with encouragement and advice for those who need their spirits lifted. Brown gets it, because she’s been there, having had her own bout with anxiety and panic attacks. “I promised myself if I got through, if God brought me through, I would do my best to try to be light for other people who may be suffering,” she recalls.

Her secret is simple: Find and do what works for you. “Other people may look and think it’s crazy, but eventually it brings you joy,” says Brown. “Just like me naming my hair ‘Donna,’ right? It has brought so many people joy—but it brings me so much joy, when I’m in the bathroom picking her out and I’m having a whole conversation.”

The Art Of Self-Care With Devi Brown

When 2020 went left, wellness expert Devi Brown, 35, asked herself one question amid the chaos: “Who am I being called to become right now?” While many were daydreaming about going back outside, Brown was getting even more at home with herself and looking deeper within. “The thing about this year that I think we’ve all begun to realize is that 2020 is the year of illumination,” says Brown, a Chopra-certified practitioner of primordial sound meditation. “It’s shining light in all the dark spots.” 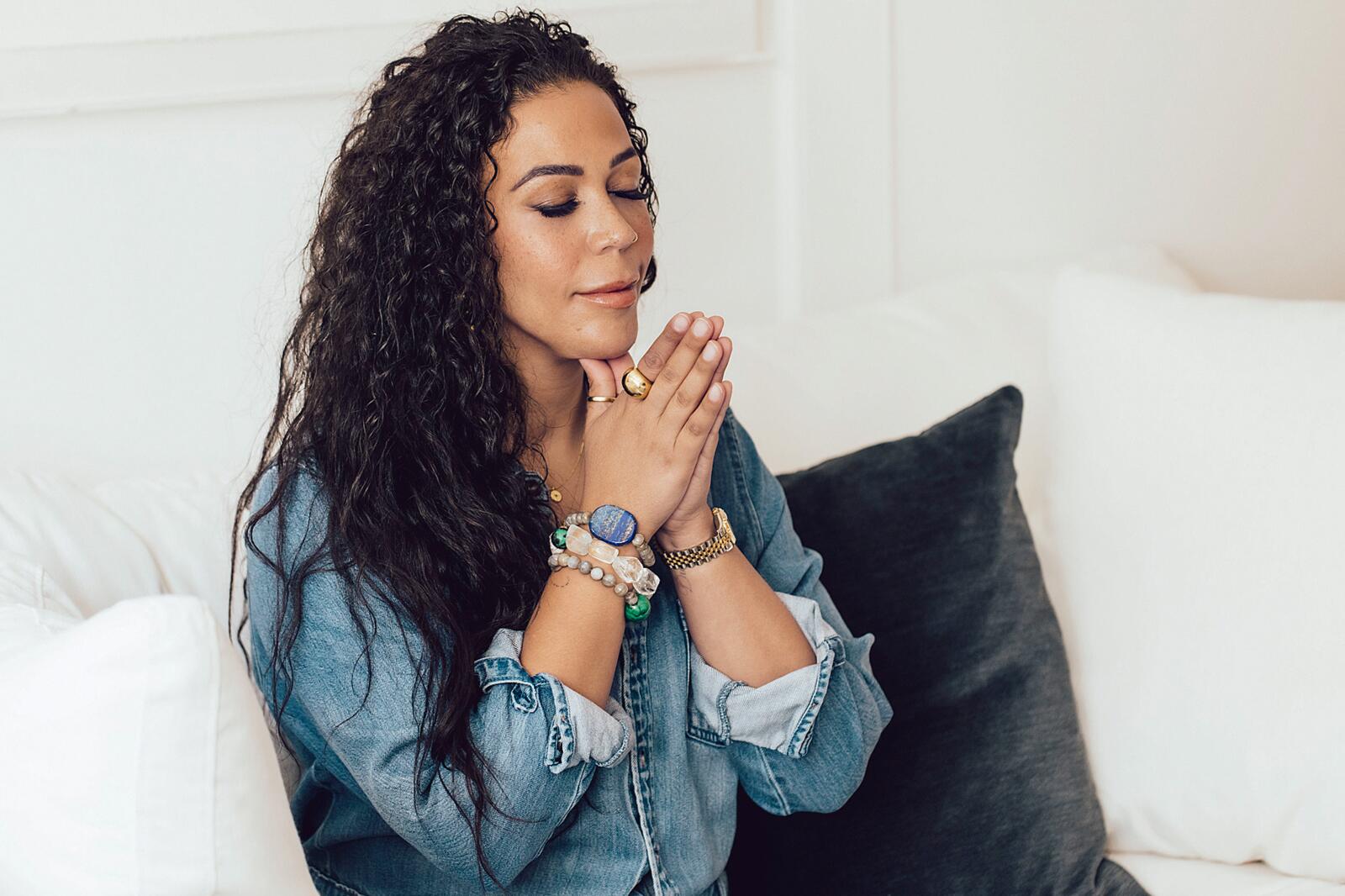 The former broadcaster’s devotion to spiritual wellness is a second act in her life, birthed from the burnout she felt in her successful radio career. Her wellness mindset really came in handy when the pandemic struck, because she already understood the great power of happiness and had insights on how to heal. “I think what’s so important about the healing journey in general is not to run from darkness,” she explains. “You don’t have to know how to ‘fix yourself’ every step of the way. You don’t have to heal in a way that’s Instagrammable or beautiful.”

The truth is, sometimes getting serious about self-care can seem a little daunting—which is why Brown’s down-to-earth, “There are no wrong ways” approach to mindfulness was such a breath of fresh air for those who could barely breathe this year. If you want to access more happiness, Brown recommends you cut yourself some slack. “We’re expected to feel happiness only with grand gestures or big things that are comparable to other people’s experiences—but joy is a state of everything being enough,” says Brown, who, in addition to being a wellness coach, is a doting wife and toddler mom. “Just an ‘enoughness.’ ‘I am enough. I am worthy’: That is joyous. This moment that I’m existing in—though it may not be ideal, it’s enough for now, because I’m trusting that it’s for my highest good. I’m trusting that it is leading and guiding me somewhere.”

With the outside world in such disarray, Brown also made sure that she found peace in the little things inside and around her space by filling her home with plants, her yard with wind chimes and her spirit with good vibes only. “It was like, wow, life is still beautiful anyway,” she reflects, “and life is still growing and changing and moving anyway, and none of this stuff that we put stock into is actually real. None of it matters.”

The Art Of Movement With Kelsey Guy

You know those adorably happy Black women on roller skates you’ve seen dancing all over your TikTok feed lately? Well, Kelsey Guy (@the_good_guy91) is one of them, and her feel-good skate breaks have helped her amass over 150,000 followers and 2 million likes since she began sharing videos of herself skating back in April. 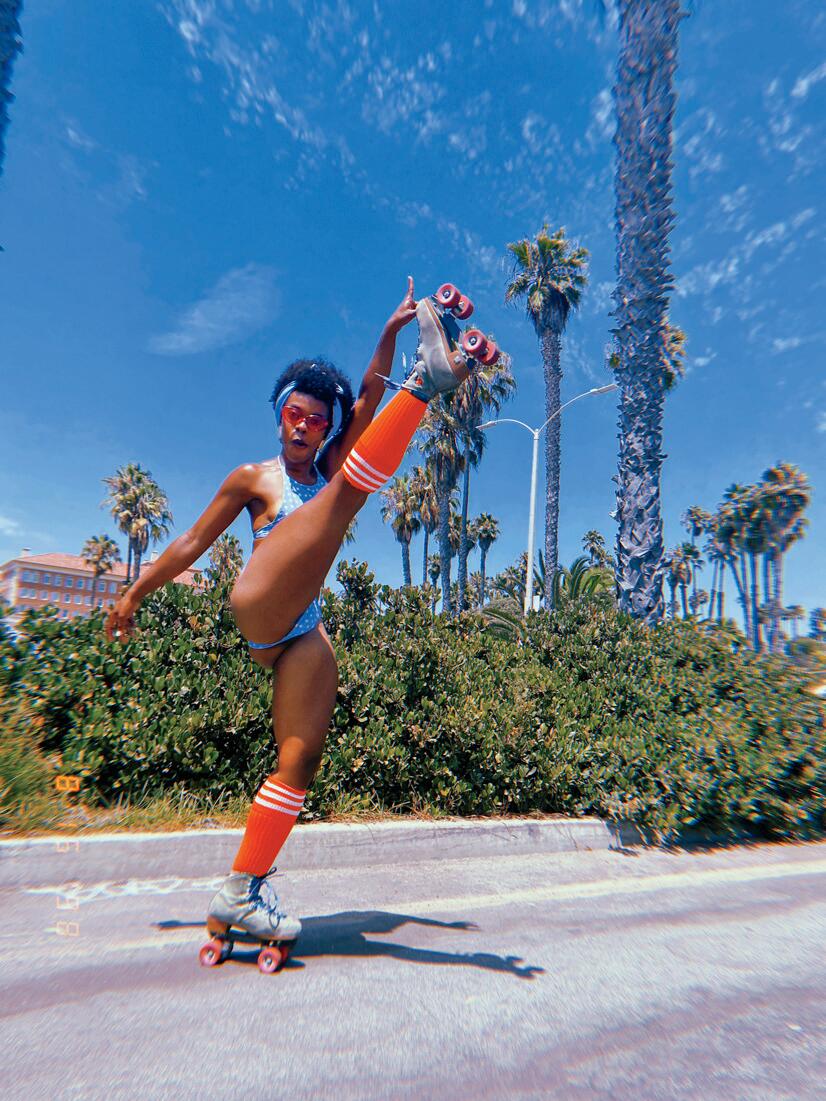 Five years ago, Guy, 29, moved from Memphis to Los Angeles to chase her dream of being a professional dancer. Though she ran in the same circles as some of the top choreographers and dancers in L.A., it took a while for her to find her groove and book bigger dance gigs.

To pay the rent she worked odd jobs, including as an animal-hospital worker, a nanny and a ride-share driver—but she was determined to keep dancing for the love of it. After throwing herself a birthday party at a local hotspot roller rink, Guy discovered she was kind of into skating. She asked her mom for a pair of skates for her birthday, so she could keep rolling—but life got busy, and they mostly sat in her car.

Just like that, Guy’s hobby became her safe space. Skating brought zero pressure and endless freedom—and she was hooked. “It’s euphoric,” she explains. “Some nights I would skate and my body was vibrating at such a high frequency. I would just be smiling my face off.” Guy, who now teaches beginner skaters part time, started posting short videos of herself on social media, rocking out on skates all around L.A.—and her fan base grew by the day. 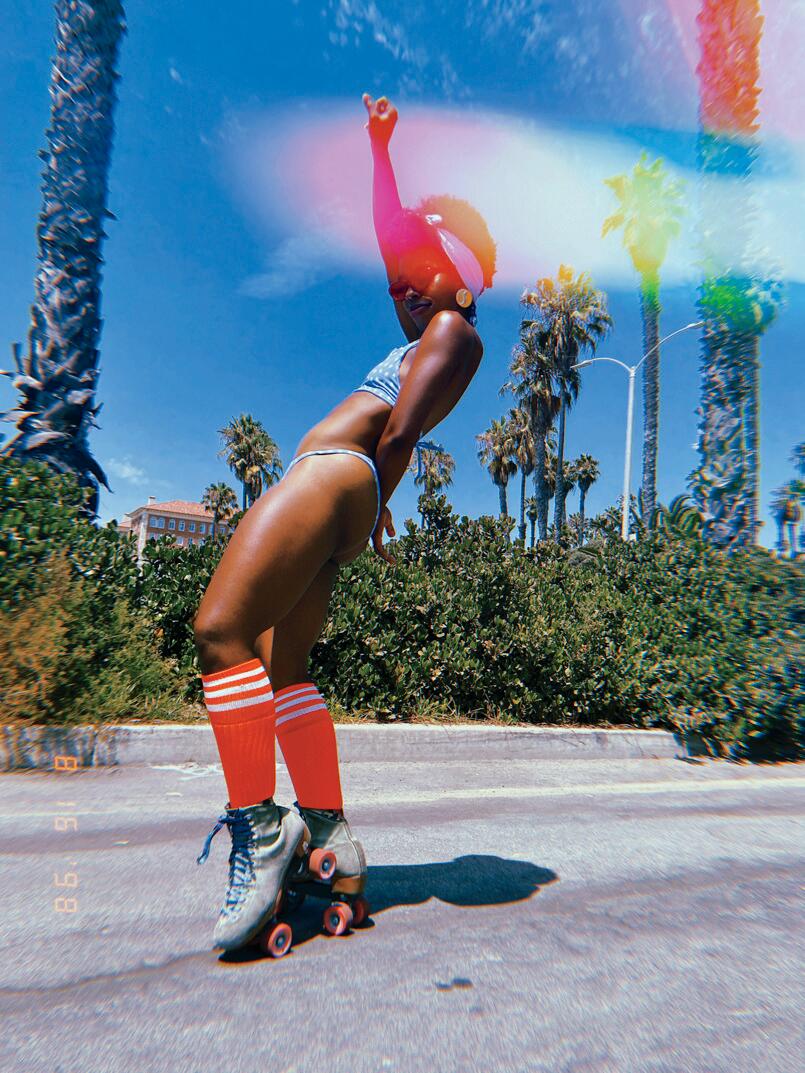 As much as she appreciates the love and support, whether her camera’s on or off, Guy’s focused on one thing only: accessing music and movement, to keep her grounded in her happy place.

This article appears in the Nov/Dec 2020 issue of ESSENCE on newsstands now!