‘The dark tetrad’ of personality dimensions explored in engaging podcast

Dr Hunter Mulcare and Amy Donaldson are psychologists and hosts of the Two Shrinks Pod, a podcast that explores personality disorders, psychological theory, and the representation of psychosis in the media. The pair have produced one of those rare podcasting treats: an independent show on a fascinating subject, with good quality audio and a strong chemistry between hosts. 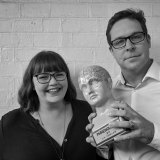 Mulcare wanted to try podcasting during a period of leave, when he "needed to keep his brain working," and enlisted a surprised Donaldson, who says she "literally showed up for a drink one night at [Mulcare's house] and there were microphones there. And now we're 51 episodes in!"

Mulcare wanted to create a show that explained psychology and psychological theory while never talking down to the audience. Mulcare was frustrated with the way psychology was being portrayed in mainstream media, and thought podcasting offered him a chance to go a little deeper.

"I was listening to a lot of American politics podcasts at the time," says Mulcare "And some of those shows would talk in great detail, at a really high level about complex situations. And I thought, 'that's what I want!' I want to have a podcast that would be two psychologists talking to each other, and not to dumb it down for people. Because I get sick of those two-minute spots on radio or breakfast television about some new psychology study…"

The podcast is one I've found myself binging on recently, and while the topics can be hard going at times, the hosts keep the episodes engaging. Mulcare and Donaldson have a knack for explaining the most challenging concepts to each other and the audience.

"We tend to get three kind of groups of people listening to the podcast," explains Donaldson. "We get the other psychologists and therapists who are learning about disorders or catching up on their professional development, that sort of thing. The second group are people who are experiencing an issue themselves or have friends, family, people in their life who have a personality disorder or have anxiety. The third group of people just have an interest in psychology and are just curious about these things."

In terms of downloads, the most popular episodes have been focused on "the dark tetrad" of personality dimensions; narcissism, Machiavellianism, psychopathy and sadism.

If you binge on Two Shrinks Pod and find yourself thinking you have every personality disorder mentioned, Mulcare assures me there's nothing to worry about. "When you're studying personality disorders at university, [a lecturer will often say] 'How many people think they've got this disorder?' and everyone nods in shy agreement. It's fine, you're normal.

"You either think yourself or everyone around you has it, but you're probably fine," laughs Donaldson.

dark, of, personali, tetrad', the
You may also like:

Fans Are Convinced Emma Watson Is Kitty On ‘The Masked Singer’ — Yes, Really

Parents can get £5 off Schuh by donating old kids shoes

Why Meghan and Harry won't suffer from losing Sussex Royal