‘The first thing I did was sigh deeply’: Patrick Stewart returns to Star Trek

When actor Patrick Stewart was offered a chance to return to his career-defining role of Captain Jean-Luc Picard on Star Trek: The Next Generation, he said no.

"I was strongly opposed to ever returning to Star Trek," he says. "There had been other invitations which I had firmly turned down. When this one came up, I think maybe the first thing I did was sigh deeply."

Then, the 79-year-old acting legend met with the writing team of the planned sequel, now titled Star Trek: Picard. "They just happened to be names of Academy Award-winning screenwriters, and Pulitzer Prize winners," Stewart says, "and I was hooked." 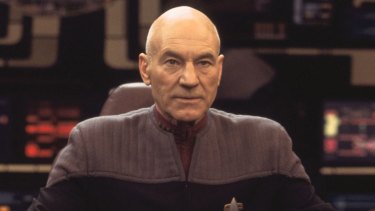 For seven seasons, 178 hour-long episodes of Star Trek: The Next Generation, and four feature films, Captain Jean-Luc Picard led the flagship of the United Federation of Planets: the gleaming, state-of-the-art USS Enterprise.

On paper, the new series is a sequel to Star Trek: The Next Generation, though in practice it may serve more closely as a sequel to one of the show's best episodes, The Measure of a Man, which examined the inalienable human rights of artificial intelligence.

Equally, while it features appearances by a number of characters from the larger Star Trek universe, including Picard's former first officer Will Riker (Jonathan Frakes), counselor Deanna Troi (Marina Sirtis), Lt Commander Data (Brent Spiner) and Seven of Nine (Jeri Ryan), Star Trek: Picard stands out because unlike most sequels it is forward-facing. 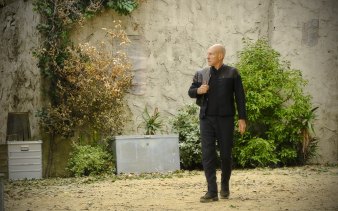 It was important to Stewart that the new Star Trek would look to the future, with minimal dwelling on what happened in the past. Credit:Amazon Prime Video

"That was very important to me," Stewart says. "And it's something that I talked about, even before I finally made the commitment. I wanted minimum looking back over our shoulders at what had been before, and if we were to do that, I wanted it to be for a powerful and potent reason that we were doing it."

After the initial meeting with executive producer Alex Kurtzman, Stewart asked if the producers might put on paper some of their ideas for him to consider. Two days later a 35-page document turned up.

"I was excited by that and I saw in it the potential, only a potential maybe, to make one little tiny element in the world, which might be positive, optimistic and beneficial to everyone," Stewart adds. "That's what Star Trek always attempted to do."

For Stewart, whose screen credits include Excalibur, the X-Men films and stage productions of A Christmas Carol, Hamlet and The Merchant of Venice, the role of Jean-Luc Picard was career defining, a catalyst for some of his best work – but also a complex hurdle. 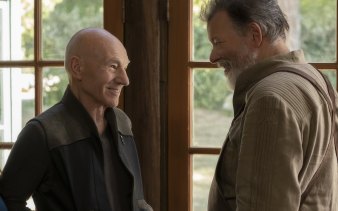 "It can be an albatross," Stewart says. "After I had wrapped the final film, I got a meeting with a director I'd been trying to meet for a project in which there was a supporting role that I wanted to do. He was very nice, very friendly, but then he said, 'I like what you do. I like your work, but why would I want Jean-Luc Picard in my movie?'

"That was shattering," Stewart says. "It disturbed me deeply for a long, long time, and I thought, oh my God, is that what I've done to myself? [Have] I erased my career essentially by doing this? [But] I worked with some good people and things changed, and it hasn't quite ended up like that."

The Next Generation television series and movies gave Picard a complex personal mosaic, including a family that was tragically killed in an accident and a number of women with whom he had meaningful relationships, notably Dr Beverly Crusher (Gates McFadden) and Lt Commander Nella Daren (Wendy Hughes).

"I had occasional relationships, romantic relationships in the series," Stewart says. "[That was an] acknowledgement that actually the Enterprise was his home and the crew were his family and he felt that as an intense responsibility in every way, socially as well as professionally and scientifically." 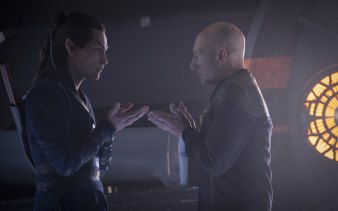 “Jean-Luc was never obsessed with position or roles, people were people to him,” says Stewart of his famous character. Credit:Amazon Prime Video

The Jean-Luc Picard we meet again in Star Trek: Picard is not your parents' Starfleet captain, nor is he living in your parents' Star Trek. Retired and running the Picard family vineyard in La Barre, France, the former starship commander carries some bitterness over the circumstances of his departure from Starfleet and is, to some extent, haunted by the past.

"Haunted is a very good description," Stewart says. "He has profound feelings of guilt about the death of Data. He has profound feelings of disappointment that he messed up a job that he was given to do, and that he got it wrong. Although Jean-Luc was never obsessed with position or roles, people were people to him, the world is changing and he's aware that it's changing and there's nothing he can do about it."

In the original Next Generation series the gleaming ship, and its noble captain, were metaphors for Star Trek's storytelling, a 24th century fable about mankind's conquest of the stars, and the defeat of his own inner darknesses. If Star Wars was used and messy, Star Trek was always fresh and clean.

Star Trek: Picard, a sequel which picks up that story some two decades later, upends all of that. The universe of the new Star Trek ambitiously mirrors our own: chaotic, less certain, and threatened.

The series rich darkness of tone, Stewart says, is a powerful ingredient in its storytelling. And the timing of the series could not be more significant.

"Because the world is a troubling place currently," Stewart says. "Everywhere in the world, from the horrendous bushfires in Australia to that plane shot down in Iran. This is going to sound so utterly pompous and I will regret it for the rest of my life, but I think the world needs Star Trek right now."

Balinese dance an epic delight for eyes, ears and soul

Camila Mendes Uses This Exact Multi-Stick for the Loveliest Glow