It seems clear that, should it win the federal election, Labor is seriously considering a massive write-down of the value of the national broadband network. It’s not quite so clear how it could do it. 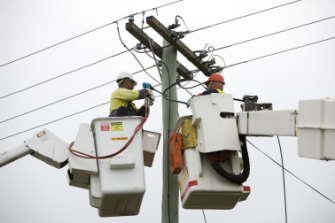 The shadow communications minister, Michelle Rowland, has consistently declined to rule out the write-down that NBN retailers have been calling for with increasing vehemence.

Only this week Telstra’s Andy Penn called for policy changes to the economics of the NBN to lower its wholesale prices. Telstra and the other major retailers have complained that they are generating minuscule, if any, margin from reselling NBN capacity because its wholesale prices are too high. 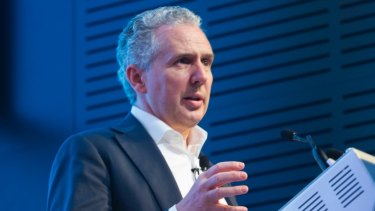 Telstra CEO Andy Penn. Telstra and its peers are calling for a massive write-down in the value of the national broadband network.Credit:Ryan Stuart

A big write-down would, in theory, enable NBN Co to lower its prices while still generating a positive internal rate of return (IRR), a prerequisite for keeping the $51 billion enterprise, its $19.5 billion of debt and multibillion-dollar losses off-budget.

There is, however, a rather significant obstacle to NBN Co absorbing a write-down big enough to have a meaningful impact on wholesale costs.

Because the NBN is still in its build phase – this is the peak year for the roll-out – it has made very large losses over the near-decade since it was established. At the end of last financial year it had accumulated losses of $17.3 billion, reducing its equity base to $12.2 billion.

While the losses will reduce once the NBN is essentially completed in 2019-20, it probably won’t be generating meaningful profits and generating equity until closer to the middle of the next decade, by which point it might have less than $10 billion of equity.

It is self-evident that you can’t write $20 billion off a $10 billion (or less) equity base.

NBN Co itself has rejected the calls for a write-down, with its chief executive, Stephen Rue, telling a parliamentary committee this week that NBN Co assesses the carrying value of its assets and their fair value annually. The auditor-general has signed off on the accounts after reviewing NBN Co’s assumptions.

Rue made the point that when people called for a write-down, what they were actually calling for was a dramatic reduction in wholesale prices. It’s a mechanism, not the objective.

There are alternatives to a write-down that could lower wholesale prices, although they would involve heavy costs for government.

Between 2018-19 and 2021-22 NBN Co will pay Telstra and Optus about $7.4 billion as their customers are migrated onto the NBN. Separately, over that period, it will make lease payments to Telstra for access to its infrastructure of up to $3.6 billion and then, under an agreement that runs for 35 years, $1 billion a year. 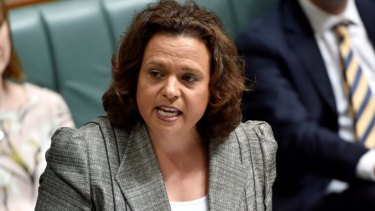 Shadow communications minister Michelle Rowland has consistently declined to rule out a write-down of the NBN.Credit:

It is those payments that might give Rowland the ability to direct NBN Co to lower its prices without undermining its financial viability.

In 2017 Telstra announced plans to securitise $5.5 billion of the estimated $15 billion-plus net present value of the lease payments. The plan was vetoed by NBN Co.

If the federal government were to cash out the $7.4 billion of subscriber payments and buy out the lease agreement, it would effectively inject more than $20 billion of value into NBN Co by carving those payments from its cost base and boosting its cash flows.

The substantial change in its economics would enable NBN Co to pass through the savings to retailers without damaging its ability to generate a positive IRR.

In the near term, however, lower wholesale costs may not provide retailers with the margin they are seeking.

Part of the explanation for the absence of retail margin is that the 2018, 2019 and 2020 financial years are the peak period for NBN activations.

The retailers are engaged in a frenetic land grab, competing for customers at the critical moment when they are first connected to the NBN in the belief that most will be retained. The intensity of the competition would probably see the benefit of price reductions pass largely through to consumers.

Alternatively, and more likely, NBN could use its enhanced financial capacity to achieve what is likely to be Labor’s other big objective, introducing more fibre into the network, perhaps by upgrading the 40 per cent or so of the network it plans to deploy as fibre-to-the-node to fibre-to-the-curb (FTTC).

That wouldn’t be cheap – at the current cost per premises it would probably cost at least $10 billion and add a few years to the build – but it would enable Labor to say that it had delivered something closer to its original promise of a fibre-to-the-premises network. The retailers might have to wait for the eventual improvement in their margins.

Film Review: ‘Blood on Her Name’