Follow
Home » Lifestyle » There's millions of #postpartumbody pics, but why do so few show stretch marks?

Waking for yet another night feed at 3am, with a phone glued to your hand for company in the bleak hours, is a scenario that any new mum can relate to.

However, for some, endlessly scrolling through social media to while away time no longer offers the comfort it once did, as a latest wave of #postpartumbody posts strikes.

These are the women they followed on Instagram during pregnancy, whose bumps grew in tandem with their own, and are now documenting their ‘fourth trimester’ online. However, unlike the majority of new mums getting to grips with sore breasts and soft, deflated tummies, it’s a sea of flat stomachs and tight bellies. They pose in heels, lingerie, bikinis and gym wear.

Some of them flex muscles, others talk about their gym regime or post their #fitnessmotivation tips and #swimwear recommendations. And while it may be their postpartum reality, it doesn’t ring true for many new mums. It can also even be hugely damaging, as Zoe Burnett from Lincolnshire discovered.

The 30-year-old had long recovered from years of eating disorders when she found herself being bombarded by the relentless images online of the perfect ‘bounce-back’ body after the birth of her daughter two years ago.

‘I remember cradling my newborn, scrolling aimlessly,’ she says. ‘My Google searches were the classic: “How do you get your baby to sleep through?” “What is colic?” “What bottles should I buy?”. So my phone knew I’d had a baby. And then social media started bombarding me with post after post of new mums with toned bodies looking glamorous and fresh. It made me feel not good enough, that I was failing because I couldn’t keep up.

‘In comparison, my stretch marks were sore and tender, my hair was greasy and messy, my breasts were enlarged to the point they hurt, my stomach stretched and I had bags under my eyes.

‘I never knew what day it was, and was constantly worrying if I was doing a good enough job. I spent my spare time knee deep in washing and trying to get some rest. It was very different from the “perfect” lives I saw looking back at me.’ 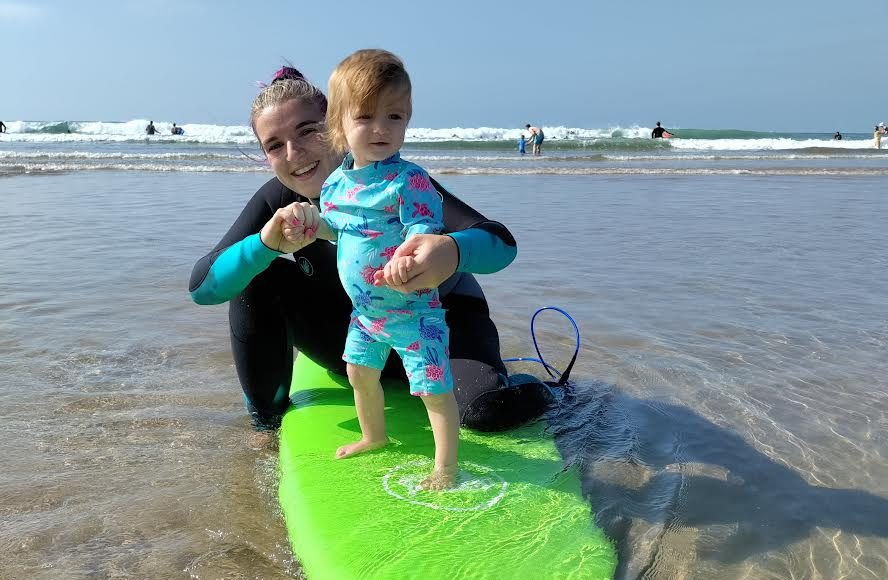 Along with a plethora of social media mums boasting that they fit into their old jeans within the first month, Zoe also began to be targeted by diet adverts online, which she found infuriating.

‘It was at a time when I was emotionally vulnerable,’ explains Zoe, who now works with children and young people with eating disorders. ‘You mix lack of sleep with faltering confidence and low esteem and that is enough to make anyone break. The outside pressures, the social media, the rhetoric of bouncing back – it’s emotionally shattering. It broke my self esteem. It felt like I was doing something wrong. That I wasn’t good enough.’

To protect herself, she shut down her social media use. ’When you’re tired and emotionally run down, you don’t always have the ability to fight those negative thoughts,’ says Zoe. ‘So I had to just block things. I had to take myself off social media for a few weeks. Instead, I focused on myself and not comparing myself to others.’

In a recent study from the University of Sydney, it was discovered that features commonly associated with a postpartum body — stretch marks, a soft stomach, cellulite and scars from caesarean sections — are rarely shown online, appearing in just 5% of the pictures.

It concluded that social media could be undermining the mental health of new mothers by bombarding them with unrealistic ideas of how their bodies should look.

Melissa Suffield, a mother of a two-year-old, says this messaging does more harm than good.

That’s why the 29-year-old content creator and former EastEnders actress from Kent now goes out of her way to post a realistic look at motherhood.

‘Bounce-back culture is a harmful myth,’ Melissa tells Metro.co.uk. ‘There are some women who will give birth and within days may not look like they have given birth. They appear to snap back, but the reality is, nobody has snapped back. The internal healing is significant. There is a wound the size of a dinner plate where your placenta was attached. That has to heal, whether you can see abs again straight away or not. There is an unrealistic pressure on women to get that body back, when in actual fact, they need to rest.’

Images that boast of a bounce back body are harmful to women, leaving them to feel like failures if they don’t lose the weight quickly, Melissa says.

‘It just adds another pressure that mums don’t need. They constantly feel like they are failing anyway, let’s not add another one to their plate. Light exercise and good eating can help. But that exercise should be about making you feel better, not looking a certain way.

‘For some people, the most important thing might be getting their jeans back on. That’s their choice. But it’s not everyone’s priority.’

Melissa talks about a ‘war of words’ she had with someone following one of her posts, where she was told ‘It’s achievable. It’s possible. Get the help. Hire a night nanny.’

‘That is the worst advice I’ve ever heard in my life,’ she says. ‘That is just not accessible to the vast majority of people. If people in the public eye have access to that, we cannot compare ourselves and we shouldn’t be judging ourselves by that standard.’

Melissa also warns that we shouldn’t be reading too much into a picture. ‘We place such an innate value on thinness, and women will be told they look amazing if they lose a lot of weight,’ she says. ‘But the fact is that plenty of people say they had hyperemesis throughout pregnancy, so they ‘snapped back’ because they barely ate, or women who had such severe anxiety and depression postnatally that they physically couldn’t eat.’

Instead, Melissa says she wants to normalise the many shapes and sizes women can be and encourage a more compassionate approach.

’We love the way our babies grow and change, but we don’t give our postpartum bodies the same compassion,’ she explains. ‘We’re so excited to find out who our babies become, but we’re not excited to find out who we are going to become. Why are we expected to freeze in time? Why do we only love ourselves at age 25, as a size eight or ten? There is a lot to answer for in the way mums are portrayed, and how it leaves them feeling.’

Psychiatrist Dr Galyna Selezneva agrees. ‘The pressure of models showing off a flat stomach nine days post delivery – when most women’s uterus won’t even contract back to its original size – is appalling,’ she tells Metro.co.uk. ‘There is no “normality” and the word should be personalised to what feels good and “normal” for each person.

‘Social media can and should be used as a positive tool and there are now many authentic accounts and influencers who aim to show the reality of motherhood, of stretch marks and sleepless nights, and I welcome that.

‘However, it is very easy to be caught in a filtered perfect world of carefully curated photos. This puts pressure on mothers who feel the pressure to be perfect. But unfortunately as quickly as validation (likes and adoring comments) comes it can go away and be replaced by panic and insecurity.

‘There are different ways to participate in social media and scrolling through unrealistic picture perfect photos is not exactly the way.’

As someone who works with postnatal women and has a background in eating disorders and addictions, Dr Selezneva recommends that all new mothers prioritise wellbeing by incorporating ‘you time’ into the baby’s routine.

‘Sleep is paramount and so is healthy nutrition,’ she says. ‘The healthy way to think about the body starts from within. I personally prioritised my joints and gut health and that helped to establish my own routine and as a result made my body stronger. The secret is to embrace the new normal and allow yourself time.’

Even personal trainers aren’t immune to the pressures of #postnatalbody posts. Nicole Clewer is a former power lifter, PT and communications specialist, who says she too felt pressure to lose the baby weight.

The 35-year-old mother of two from Oxford says her body has changed considerably, but that she has decided to be honest about it online.

In one post earlier this year, Nicole, 35, uploaded a picture of her c-section scar online after giving birth to her baby daughter in April, ‘I will learn to truly love this scar because it is the opening that allowed my first born to become our son and just recently, the same scar allowed our daughter to enter the world,’ she wrote.

The mother-of-two told Metro.co.uk: ‘I had two caesareans, and that leaves you with the mum pouch and a deep scar. I thought I could either hide it or embrace it and show it off, and make people realise it is okay not to bounce back, and that it’s okay to be proud of your body at any point in your life, let alone when you are postpartum.’

‘I have accepted that my body has changed,’ Nicole continues. ‘That it will never be the same way again. It is not just my scar. Every part of my body is bigger at the moment.

‘Every time I saw myself in a picture, I would think I was huge. But then I would remember I wasn’t; I’d just had a baby. So I have to have that constant conversation with myself.

‘You read online about people getting their body back in six weeks. But the reality is, that’s unlikely. It’s extremely rare, and for a lot of it is about good angle, lighting, clothes and filters. It’s not their reality really – so don’t make it yours.”

‘You also have to be aware of what’s going on behind that picture,’ she adds. I’m wise enough to know that everything is not how it looks. It could take fifty attempts to get that perfect angle in the image that’s been posted online.

‘And who has got time to do that? Definitely not me, with two kids.’