Theresa May earned a collectors’ item – a grin from Angela Merkel

Theresa May earned a real collectors’ item – a grin from Angela Merkel, says QUENTIN LETTS as he sees PM bat away pesky questions over Brexit deal

Two political puddings, both in trouble: German Chancellor Angela Merkel dropped in to London’s Lancaster House yesterday and appeared alongside Theresa May. Poland’s prime minister, Mateusz Morawiecki, was also there. Mrs May decided not to risk saying his name.

Merkel and May – they would make a formidable doubles team at Wimbledon, blocking, parrying, glowering at the net to prevent anything getting past them.

The event was linked to the Western Balkans summit which had been taking place for two days. This was the diplomatic meeting Boris Johnson was meant to be attending on Monday when he was writing his resignation letter.

Envoys from Albania, Bosnia and Herzegovina, Kosovo, Macedonia, Montenegro, Serbia, and many other nations were in attendance. Alas, at yesterday evening’s closing news conference, the only thing raised was Brexit. Pesky, naughty, bubblesome Brexit. 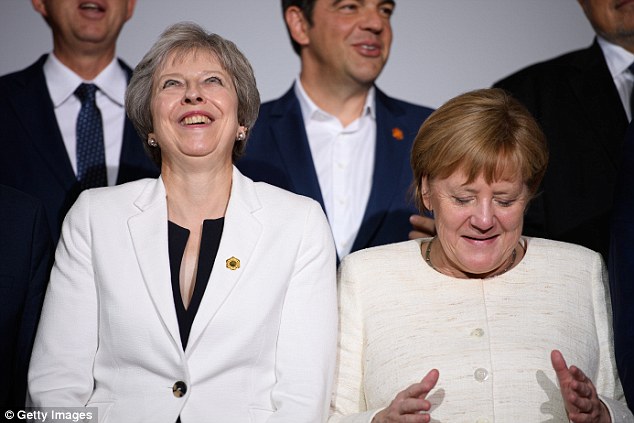 Merkel and May – they would make a formidable doubles team at Wimbledon, blocking, parrying, glowering at the net to prevent anything getting past them

Moments before Mrs May came steaming into the room – walking fast, chop chop chop – we heard that another couple of Tory MPs had quit her regime, deciding they no longer wished to be vice-chairmen of the Conservative party. She was asked about that. Block. Flat racquet killed ball dead. Next question.

Mr Morawiecki, tall, slim, dark-haired, had been to the word mine. His horizontal cast of eye accentuated and flattened by fashionable spectacles, he looked a bit like a head waiter at one of the newer Mayfair hotels. You want mineral water? Breadsticks? Mr Chatty. The British and German journos were little interested in the lad. They concentrated on the ladies, both in white, Mrs May looking under-rested. If you can get past Ms Merkel’s dreadful haircut (who IS her barber?), she has quite lively eyes.

Mrs May was asked about D Trump’s splendidly unhelpful remarks that Britain is ‘in turmoil’ and saying he might give Boris Johnson a call when he is in Britain later this week. You have to love that Trump. The Prime Minister started to wobble her head slightly from side to side, as though to say ‘how flaming ridiculous’. She smiled, and I swear one of my sweetbreads shrivelled.

The same reporter (it was Captain Groves of the Mail) proceeded to ask Ms Merkel what she thought of Mrs May’s Chequers proposals. Might she, or at least the Europeans, now ‘get on with it’ when it came to Brexit? Mrs May butted in to say Chancellor Merkel would be havin’ her own questions, thank you, so would not be answering that. 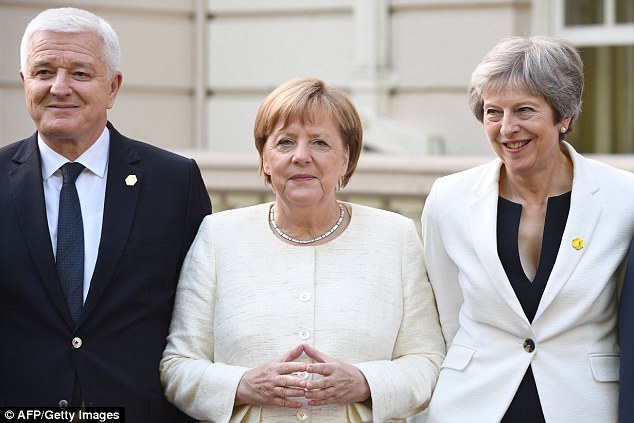 German Chancellor Angela Merkel dropped in to London’s Lancaster House yesterday and appeared alongside Theresa May. The event was linked to the Western Balkans summit which had been taking place for two days

Ms Merkel, who had initially responded to the ‘get on with it’ remark with a killer stare, allowed her two eyebrows to pop towards the ceiling. Seeing Mrs May deal thus with a scurvy Fleet Street scribe, she gave a little grin. A Merkel smile! These are collectors’ items. The next British reporter, from Sky News, also asked Mrs May about Boris. ‘Do you think he’s plotting against you?’ And what did Ms Merkel think of our preparations for a ‘no deal’ Brexit? This time Ms Merkel just kept her bloodhound chops in place.

Mrs May declined to mention Boris or even refer to his existence. He has become The Man With No Name. She fell into her usual litany about ‘a smooth and orderly Brexit… protects jobs… protects livelihoods…etc’. When that happens, you can almost hear the tape click.

The Polish chap coughed up that he had got pretty much everything he wanted from the Brexit negotiations, both money-wise and regarding Polish expats’ rights. Another satisfied customer for Downing Street’s Olly Robbins.

And that was it. The puddings wished no more interrogation. A specialist reporter, who had just spent two mind-numbing days at that summit, was furious. ‘Not a single question about the Western Balkans!’ he thundered.