They’re not loving it! Twitter users are left horrified by Japanese fast food ad that features a VERY raunchy Ronald McDonald – with pecs, a six pack, and pubic hair made out of FRENCH FRIES

Ronald McDonald has had a sexy — and incredibly disturbing — makeover in Japan.

An image circulating on social media shows the McDonald’s spokesclown looking almost unrecognizable, dressed in a pair of briefs that show off his hard pecs, muscular six pack, and a bush of pubic hair made entirely out of French fries.

The ad, which appears to be for French fries, is entirely in Japanese and has left some Western Twitter users absolutely horrified and wondering just why, exactly McDonald’s has shaken up its marketing in Asia so drastically. 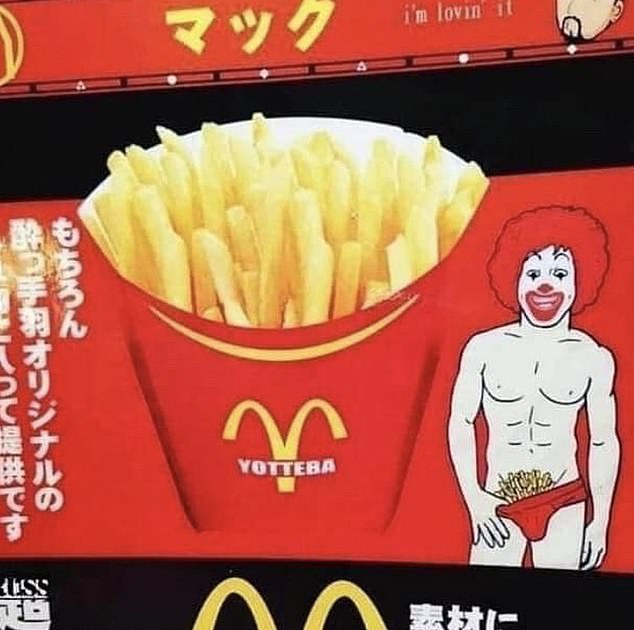 Someone’s been working out! A Japanese chain of izakayas called Yotteba poked fun at McDonald’s in a new ad, using a very raunchy image of Ronald McDonald 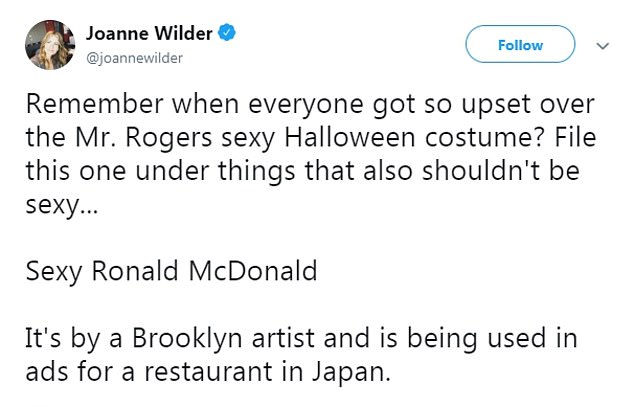 Yikes! Social media users are horrified by the image, which is not actually associated with McDonald’s

Of course, McDonald’s hasn’t, in fact, decided to turn to a sexy, risqué cartoon to sell its fast food in Japan.

The ad is actually for a Japanese chain of izakayas called Yotteba, and it purposefully pokes fun at the fast food giant.

According to Medium, the chain of tapas restaurants is known for ads that are ‘offbeat,’ but this one has earned international attention.

It uses what look like a cut-off version of McDonald’s Golden Arches on a red fry container, with fries that look exactly like the kind served at the chain.

Next to it is the Ronald McDonald art, a reproduction of a piece by New York City-based artist Wizard Skull.

‘Of course, we serve them in Yotteba’s original container,’ the copy next to it reads, jokingly reassuring readers that the fries don’t come in a clown’s underwear.

According to one Twitter user who is familiar with the chain, the ad also refers to ‘naked ingredients,’ a pun on fresh ingredients.

‘They are stressing that they make their fries from scratch on-site, not pre-processed like at McD’s,’ the person wrote.

Still, several Twitter users have run with the image, joking about the direction it seems McDonald’s has gone in Japan.

‘Is “Sexy Ronald McDonald” going to be a thing this #Halloween?’ asked one.

‘Ronald getting down way different overseas. I had no idea…’ said another.

‘Looks like my  “Try a McDonalds in every country I visit” rule will not happen when I visit Japan,’ quipped one more. 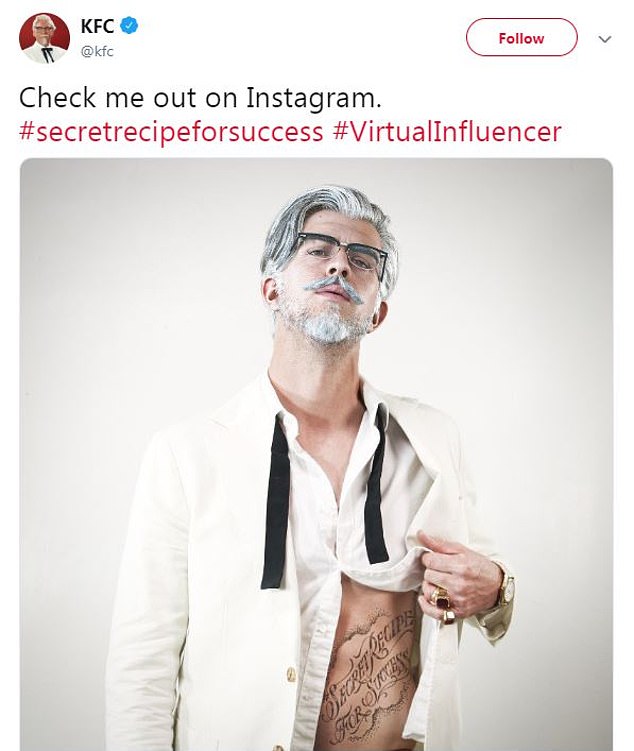 Not so farfetched! KFC unveiled a sexy Colonel Sanders in 2016, who took a turn as a hunky Instagram influencer 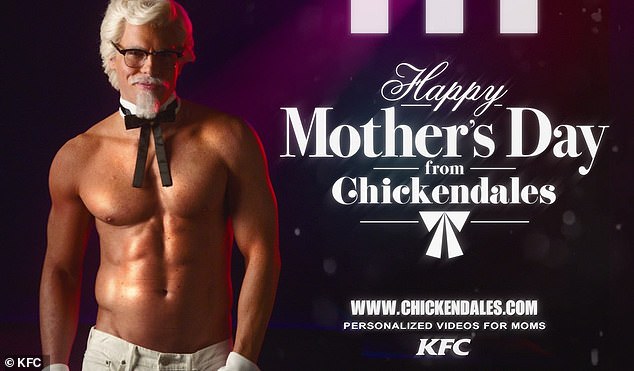 Hot biscuits! For Mother’s Day this year, the brand partnered with Chippendales and made the Colonel into a stripper

While the French fry pubes should have been the clue that this ad is not actually for McDonald’s, the concept of giving a not-so-sexy spokesperson a hunky makeover isn’t so farfetched.

KFC made headlines in 2016 when it introduced a younger, sexier Colonel Sanders.

That version has continued to pop up in ads and publicity stunts, like its own Instagram influencer account, a romance novel, and most recently, a dating simulator game.

For Mother’s Day this year, the Colonel was even cast as a Chippendale stripper for a steamy ad in which he stripped, danced, gyrated, and ultimately donned a giant fried chicken bucket costume.

ad, Fe, Japanese, restaurant, This
You may also like: