Is it time for the unholy marriage between music and sport to be consciously uncoupled?

Last weekend TV audiences and about 70,000 socially distanced humans had the pleasure of watching acts like Cub Sport, Sheppard, Amy Shark and a couple of members of INXS perform some pop-up concerts before the AFL and NRL grand finals. 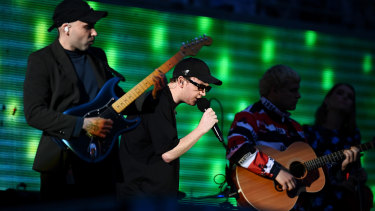 DMA’s cover of Believe has more than 24 million streams but it wasn’t enough to please the AFL fans.Credit:Quinn Rooney/Getty Images

As tradition dictates, the other national sport of pre and mid-game entertainment bashing then took place in earnest. Cub Sport were abused for their cover of Powderfinger’s These Days. “This is the saddest grand final entertainment I’ve ever seen,” one person on Twitter mused.

DMA’s copped a lashing for performing their cover of Cher’s Believe, with critics failing to take into account that the track has received more than 24 million streams on Spotify and is, by some six million spins, their most popular track on the platform.

Sheppard fared a little better but come Sunday night’s NRL match the critics had sharpened their knives ready to stick them in to Amy Shark for singing melancholy pop ballads… which is exactly what the NRL booked her to do.

This is, of course, not the first time social media has lit up in outrage over the choice of grand final entertainment. A few years ago, eminent music critic Brendan Fevola weighed in with his expert opinion on the Gang of Youths set before the NRL grand final. The band’s drummer Donnie Borzestowski was quick to point out that Gang of Youths had played one grand final whereas Fevola played none, a savage retort that was justly deserved. 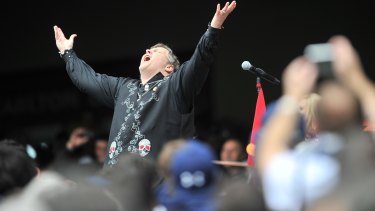 Meatloaf demonstrating how everyone feels when the Twitter pile on starts.Credit:Joe Armao

Billy Idol’s hovercraft arrival, Meatloaf’s painful AFL grand final performance and just about anyone who isn’t Tina Turner can expect their performance to be greeted with howls of “who is this?” and “this is boring!” and “play some AccaDacca”.

It is surely time for the music industry to turn the car around and go home because the sports fans won’t stop complaining.

And it is understandable, to a degree. No one goes to the NRL grand final for a OneRepublic show. No one is dressing in yellow and black and popping themselves on the couch to watch Tones and I and then flicking over to Grand Designs Australia so they can avoid the first bounce.

They are there to watch sport and sport they should get.

Part of the problem is that Australia doesn’t really produce a lot of stadium acts anymore. Our current crop of exceptional talent are singing softly about their feelings; it’s not Jimmy and Ian screaming about cheap wine or Angus and co howling about being thunderstruck.

Those bands and those songs are perfectly suited to getting a crowd’s blood pumping before the game begins. Dean Lewis singing about his broken heart while gently strumming his guitar is brilliant but it’s not going to get you spilling your over-priced beer as you leap from your plastic seat to scream the chorus.

Nor are our pre and half-time shows quite up to the level of the Super Bowl. When Australian sporting codes have the budget to fly Lady Gaga in from the stadium roof then we can revisit the concept of game day entertainment.

This week we would normally be undertaking the other other national sport of denouncing whoever dares play the Melbourne Cup. Who can forget the particularly wonderful time Taylor Swift announced she was coming to play at the races before she quickly got shut down by fans for supporting animal abuse and then remembered she had something else on.

This year Delta Goodrem, Pete Murray and The Reubens will be beamed to our television screens from various parts of New South Wales before Jon Stevens has a crack at Never Tear Us Apart from a mostly empty Flemington Racecourse.

I love watching them all perform, they are spectacular recording artists and electric live, but it’s hard to understand what exactly their purpose is at a horse race on the telly.

Musicians absolutely deserve to be on TV, the demise of variety television and the rise of trash reality has pushed out most opportunities for it to happen.

The legendary Michael Gudinski has created the brilliant program The Sound during the pandemic and one can only hope the nervous nelly programmers at the ABC recognise its value and importance and allow it to find an audience so it can carry on.

That is where musicians belong – on a show that celebrates their music. Not as a target of abuse from the people who came to watch the footy.

Why Did Jonathan Taylor Thomas Quit Acting? It Was a Surprisingly Simple Reason

'The Crown': Who’s Older Olivia Colman or Helena Bonham Carter and Who Has a Higher Net Worth?