Follow
Home » Lifestyle » Two of Us: The journey of school friends from Kenya to Sydney

Two of Us: The journey of school friends from Kenya to Sydney

Magdalene Kortom and Sharon Tiyo, both 18, met when they were nine years old, at a Kenyan school protecting Masai girls from female genital mutilation. They now study at universities in Sydney – with nary a goat or cow in sight. 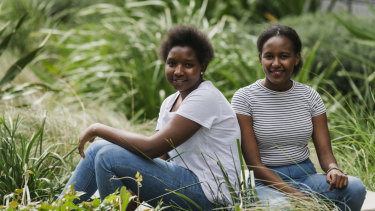 SHARON: Magdalene is very funny. It is hard to see now that we're here, because it is much harder to talk or tell jokes in English, but in Swahili she is very social, very talkative – crazy! She comes from a village called Mapashi, which is close to my village in Kenya. She has 15 brothers and sisters. That's not such a big family. Her father has two wives, and she is a child of the first wife.

She was not my best friend at primary school [at the Kakenya Centre for Excellence], but we were close. I liked her very much. But now that we have come to Australia, she's my best friend! We came here on scholarships because we had similar results at the end of high school. Our exam marks determined where we would be sent for university. I was first – the top mark – and Magdalene was third. It had always been my dream to study abroad. I prayed so hard when I was waiting for my results.

Magdalene had never been on a plane before. She was so scared when the plane took off! I had been only once before, when I came to Australia last year – it is scary when the flight is bumpy.

This is her first time to be in a building with an elevator; we have no flushing toilets at home, no fridges, no ovens or microwaves. We wash our clothes in the river. Here, there are washing machines! But we are Masai, and our sign of wealth is owning lots of cattle. You can have a very small house, but if you have a lot of cattle and land, you are very rich. Also when you have many wives, you are very rich. Owning a big house with an oven is not important for Masai. But nowadays it's changing. Young people think cows are not so useful.

Magdalene's family is middle-class. Two wives is in the middle. My father had three wives, which is also in the middle. I know Magdalene does want to get married, but she doesn't want to share her husband. I have no idea how many children she wants.

She's confused about her future career, I think. She wants to be an engineer, or an academic. She loves chemistry and maths. But she was very worried when she arrived because even the way you write chemical signs and things is different here: how to draw the diagrams, the experiments – it's all different. It's been a challenge; she's been through a lot. She's catching up and feeling happier now.

It is a very different life here. All the buildings of the city, compared to the mud. Magdalene does the same jobs as me at home – many jobs in the house. I had to clean the house, fetch water from the river using a donkey, collect firewood, cook on the fire. A lot of time I was herding. But Magdalene doesn't herd cows like I did; she herds goats. Goats are the most disturbing animals. It's easy to look after cows, but goats, no. They're so aggressive, and they don't stay in the same place like cows or sheep. It's difficult to trace them, they go everywhere.

Now that we are here, I think Magdalene is relieved – and there's no goats to herd! She used to play soccer in Kenya, and I think she would like to do that again, but she doesn't want to go for a walk or go out usually – she likes to stay inside and read. She reads chemistry and maths and sometimes novels, like me. We both read in English. Swahili novels are so boring!

MAGDALENE: Sharon was very small when I met her, and very shy. She is not shy anymore. Back when we started, our school had only one room: an iron shed with a dirt floor. She was very small but also very clever, especially at English and science.

Sharon has 26 children in her family. That is not unusual in Kenya. She comes from a village called Olopirik. I have never been to her home, but I've been to her stepmother's place. I knew her father. Before I went to Kakenya, he was the chairman of the school I went to. He has passed away now. He was a good man, but very tough.

It is still very strange for Sharon and I to be in Australia. For myself, being away from my family is hard. I miss them. In the first weeks after we arrived, everything was very terrible. I chose the wrong maths: discrete maths, which is the hardest. I could not understand it at all. I had to change. Now I can understand what is going on, but in the first weeks I almost became sick, because I was so worried.

Sharon is doing well at life here in Australia. She is very good at English, she likes the food, and she is socialising very much. She likes to go outside and walk around. Her favourite food is risotto and pasta. She is studying a foundation course for one year, and then she will go on to study dentistry.

Life is very different here than in Kenya. In Kenya, every morning you must prepare the breakfast, but before that you must go and collect the firewood; start the fire; then you go to the river for water; then you cook the food; then you wash heaps of utensils; then you wash the clothes; then you must do many other tasks. Looking after the goats, for example, is very hectic. Some goats go this way, some go the other way. When we tell people in Kenya that all we have to do here is eat and sleep and study, they think we are very lazy. Last month, we did not have to harvest the maize or do the planting!

Sharon likes listening to music – R&B – and reading novels. Sometimes she likes to go shopping. How would I describe her? Short. No! She is Masai. She is strong and proud. She could kill a lion.

To read more from Good Weekend magazine, visit our page at The Sydney Morning Herald, The Age and Brisbane Times.

Journey, of, scho, the, two, Us
You may also like:

Gyms open: When will gyms and leisure centres reopen?