Erbil, Iraq — Turkish forces are bombarding territory held by America’s Kurdish allies in northern Syria. President Trump has called the Turkish offensive “a bad idea,” but it comes just days after his administration pulled back U.S. troops from the border — exposing the Kurds, who have led the fight against the Islamic State in Iraq and Syria (ISIS).

Senator Lindsey Graham, one of the president’s closest supporters, warned this could be “the biggest mistake of his presidency.”

Phase one of the Turkish onslaught has been even more intense than many feared. America’s steadfast partner in Syria has been abandoned and on the receiving end of airstrikes and artillery bombardment.

Dozens of attacks have been waged across the Kurdish held region and nowhere is safe. Villages once held by ISIS are now under Kurdish control and civilians are once again running for their lives. 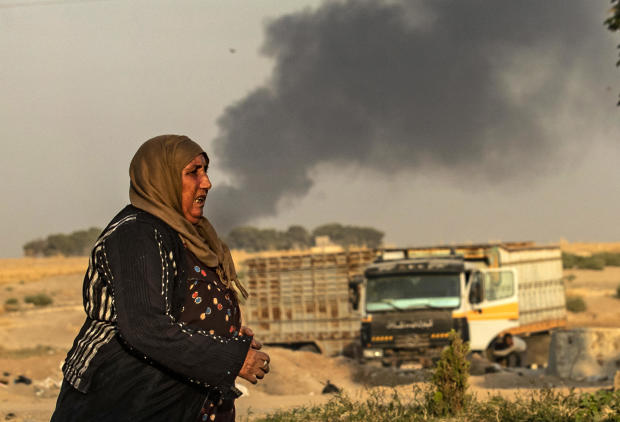 A senior U.S. official tells CBS News that operations against ISIS are now “effectively paused” as the Syrian Democratic Forces concentrate on the Turkish incursion.

“If the Turkish incursion results in backing off pressure on ISIS in Syria and the release of hundreds of ISIS prisoners, that is potentially very destabilizing,” Winnefeld noted. “It poses a threat not only to the United States but to a lot of our partners in Europe and elsewhere in the region.”

The Syrian Democratic Forces lost at least 11,000 men and women in the campaign to defeat ISIS, with the backup of U.S. troops and airpower.

Thousands of ISIS militants are now being held in overcrowded prisons that Kurdish forces are struggling to contain. There have already been reports of unrest in overcrowded detention centers, sparking fears of breakouts and an ISIS resurgence.

Kurdish senior commanders told CBS News they have been “stabbed in the back” and called on the U.S. on Wednesday to put in place a no-fly zone.