Follow
Home » Lifestyle » Victoria Ruvolo, Who Forgave Her Attacker, Is Dead at 59

Victoria Ruvolo, Who Forgave Her Attacker, Is Dead at 59

Victoria Ruvolo, whose face was shattered when a teenager tossed a 20-pound frozen turkey through the windshield of her car in 2004 but who then insisted on mercy in his sentencing, died on Monday at her home in Ronkonkoma, N.Y., on Long Island. She was 59.

Her death was confirmed by her sister Jo-Marie Brennan, who said the cause had not been determined.

Ms. Ruvolo’s widely publicized kindness toward her attacker provided emotional counterpoint to a senseless act that began in the early hours of Nov. 13, 2004. She was returning home from watching a niece sing at a recital in Amityville, also on Long Island. Her friend Louis Erali was in the passenger seat of her car, a Hyundai.

As another car with three teenagers in it approached hers from the opposite direction on Portion Road, a passenger, Ryan Cushing, then 18, threw the turkey through the open window of the back seat. (The youths had purchased it with a stolen credit card, the authorities later said.)

The turkey crashed through Ms. Ruvolo’s windshield, crushing the bones in her cheeks and jaw, fracturing the socket of her left eye, causing her esophagus to cave in and leaving her with brain trauma.

Mr. Erali pulled Ms. Ruvolo’s foot from the gas pedal, steered the damaged car to a stop and cradled her head until an ambulance arrived.

Ms. Ruvolo required extensive reconstructive surgery to her face and months of physical and cognitive rehabilitation before she could return to work as a collection agency manager nine months later.

Suffolk County prosecutors had wanted Mr. Cushing to serve the maximum of 25 years in prison for first-degree assault and other offenses. But Ms. Ruvolo persuasively argued that a long sentence would only turn him into a hardened criminal. She recalled her reasoning in a post for the Forgiveness Project, a website that collects stories from people who have rebuilt their lives after trauma.

“Had he always been a bully?” she said she had asked prosecutors. “Was he always hurting other people? What could possibly have built up inside him so bad that he had to throw something so hard?”

She added, “I didn’t want Ryan to rot in jail.”

After his guilty plea in August 2005, Mr. Cushing — aware that Ms. Ruvolo had pressed for a short sentence — stopped to speak to her in the courtroom and wept profusely. She embraced him, stroked his face and patted his back. 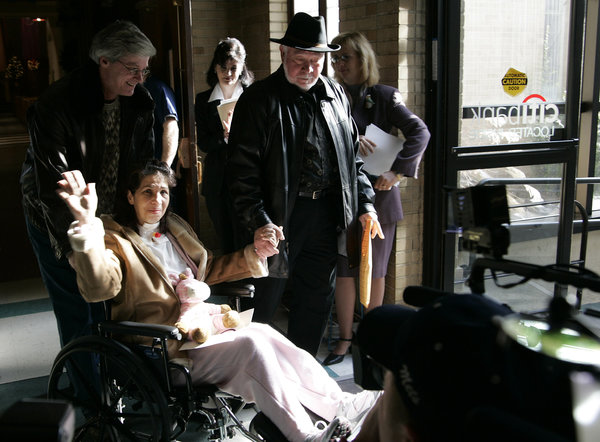 Two months later, at his sentencing hearing in Suffolk County Court in Riverhead, he told her: “Your ability to forgive has had a profound effect on me. It has already made a positive change in my life.”

When it was her turn to deliver her victim impact statement, she said that she had not absolved him and that she expected him to accept the consequence of his actions. She added, speaking to him: “There is no room for vengeance in my life. I know you are remorseful.”

Victoria Ann Ruvolo was born in Brooklyn on March 12, 1960, the youngest of seven children of Anthony and Josephine (Buccellato) Ruvolo. Her father was a supermarket foreman, her mother a homemaker. After the family moved to Long Island she graduated from Oceanside High School in Nassau County. She worked for the collection agency for more than 30 years.

In addition to Ms. Brennan, she is survived by another sister, Rita Dierna; a brother, Joseph; and a number of nieces and nephews.

Ms. Brennan said her family had not been surprised by the compassion Ms. Ruvolo demonstrated.

“Not all of us would be that way, but if you knew her, that’s how she was,” she said in a telephone interview. “She had a very special soul.”

After Ms. Ruvolo’s recovery, she spoke about empathy and forgiveness at schools and programs like Taste (Thinking Errors, Anger Management, Social Skills and Talking Empathy), which holds criminals accountable for their actions.

As part of his rehabilitation, Mr. Cushing also spoke to Taste, Robert Goldman, its founder, said by phone.

“Ryan has a job and is a productive member of society,” said Mr. Goldman, who collaborated with Ms. Ruvolo and Lisa Pulitzer on a book, “No Room for Vengeance …” (2011). “He did everything Victoria challenged him to do and spoke to kids about the mistakes he made.

“That’s her legacy: She’s an example of forgiveness in a vengeful world.”

Hashtags Are Central To TikTok. Here’s How To Actually Use Them.

Teen lucky to be alive after fish jumps in boat, stabs him in neck

Who is racehorse trainer Paul Nicholls, and what runners will he have at the Cheltenham Festival?

Brainteaser challenges puzzlers to find the robin among the birds