Victorian schools are on track to reopen in term four as the number of new cases of COVID-19 falls.

Education Minister James Merlino says he is confident that students in Victoria will return to the classroom in term four, based on the downward trend in community transmission of COVID-19 under stage four restrictions. 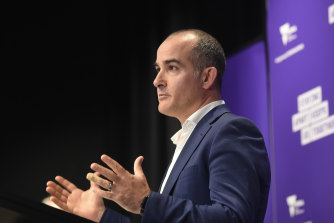 Once schools reopen, small group tutoring sessions for students who have fallen behind are also being considered, both in term four and next year, the minister said.

Mr Merlino said a decision on exactly when in term four schools would reopen for all students would be based on the advice of the Chief Health Officer.

“I’m confident [schools will reopen] based on the continuing downward trend in community transmission and the positive cases in our community,” Mr Merlino told the Public Accounts and Estimates Committee on Tuesday.

Term four is due to begin on October 5.

Speaking at a parliamentary inquiry into the Andrews government’s response to the pandemic, Mr Merlino said a decision on when to reopen schools for all students will be made in line with the national cabinet’s strategy of suppression of coronavirus.

Speaking separately, Chief Health Officer Brett Sutton said case numbers were "heading in the right direction" for schools to reopen "at some stage in term four".

"I think it will be staggered but I absolutely hope we can get there," Professor Sutton said.

But Stephen Duckett, health program director at the Grattan Institute, warned that any reopening of schools while the virus was still circulating in the community would “inevitably” lead to new outbreaks.

Dr Duckett said it was his view that Victorian schools should continue with remote learning in term four, based on the current number of cases in the community.

“We have to assume that if all the schools go back before the virus is eliminated there will be an outbreak in a school,” he said.

He said it was particularly important to keep senior schools closed, because of evidence of transmission among students, although reopening primary schools would probably be less risky.

“Schools, especially senior schools, are places where transmissions can occur,” Dr Duckett said. “And so while we have active cases in Victoria we should not be opening those schools.”

Tutors are also likely to be recruited to help students who have fallen behind during Victoria’s extended period of remote learning catch up on lost learning, Mr Merlino told the parliamentary committee hearing.

“This will be a feature not only for term four as we return to face-to-face teaching but particularly for term one next year,” he said.

It could include a tutor working with a group of four or five students whose learning is at a similar level, in sessions of 30 to 40 minutes, three times a week.

The committee also heard that more than 240 schools have been temporarily closed in Victoria since April due to a positive case of COVID-19, including a number of schools that were forced to close multiple times.

All schools in Victoria have been closed since August 2, other than for the children of permitted workers who cannot work from home, and for vulnerable children.

re, Schools, tipped, to, Victorian
You may also like:

The only way you’re going to survive this awful, terrible winter is reading a gigantic epic science fiction or fantasy series

The gift tax made simple

7 tax advantages of getting married

12 Things Under $35 to Buy from Walmart Now That Shipping Is Free (for Members!)