VIP fixers reveal what stars REALLY get up to on luxurious holidays – including a reality star who racked up £13,000 on drugs and an ‘arrogant singer’ who fled the country following a brawl

Two Brits who swapped their 9-to-5 jobs in the UK in search of sex, drugs and a hotter climate have revealed what celebrities really get up to on their luxurious getaways.

VIP fixer Chris*, which is a false name, 29, moved to the United Arab Emirates four years ago after being swayed by the tax-free salaries and luxury style of living.

Speaking to The Sun Online, he told how he started off as an estate agent, but was soon introduced to a Premier League footballer, which kick-started a whole new career path.

Now, he now earns up to £15, 000 a month from famous faces who pay him to put on the perfect holiday.

Meanwhile, 26-year-old DJ, Jordan*, also a false name, has contacts in Mykonos and is the go-to man for those wanting to experience the high life at the latest celebrity holiday hotspots. 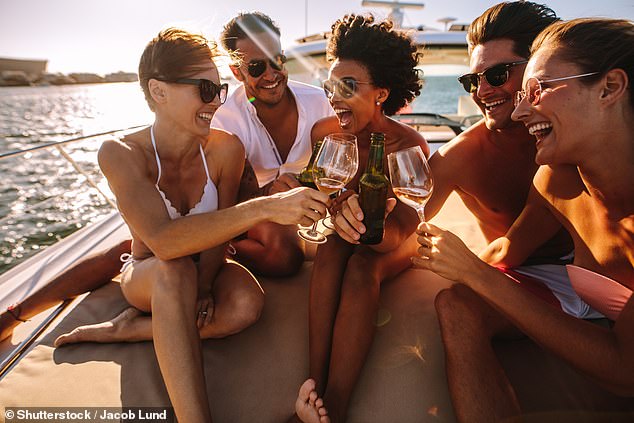 Two anonymous VIP fixers, from the UK, have revealed what stars really get up to on their luxurious getaways. Pictured, stock image

When Chris first set out to become a go-to-man to the stars, he had no experience or celebrity contacts, and relied solely on word of mouth.

But while he now enjoys boozy nights out with some of the world’s most famous faces, and dines at some of the most exclusive restaurants, he warns not everything is as it seems on Instagram.

‘What they don’t see is that I’ve had to live in a tiny maid’s room for a year because a reality star didn’t pay me the £13,000 bill he racked up on champagne and drugs,’ he told the publication.

‘I’ve tried desperately to get it back, but he doesn’t answer his phone and he blocked me on social media, so I don’t think I’ll be seeing that money again.’

He went on to recall another occasion where he got a soap actress into an exclusive yacht party after flying her over to Abu Dhabi Grand Prix, but she got so drunk she was sick on board – and Chris hasn’t been invited back since.

FAKING IT TO MAKE AN IMPRESSION

Chris admits he does everything from hiring designer suits and blagging free hotel stays in return for Instagram posts from stars.

He even told of an occasion where he was so keen to impress an England international footballer, he rented a £1,000-a-night apartment at the Burj Khalifa so he could pretend it was where he lived.

‘I deal with really expensive experiences, so sometimes I have to stump up my own cash as I don’t want people to think I’m a fraud,’ he said.

‘Helicopter rides, boozy brunches, supercar rentals – they all cost money. In thrill-a-minute Dubai, money can buy you anything if you know the right people.’ 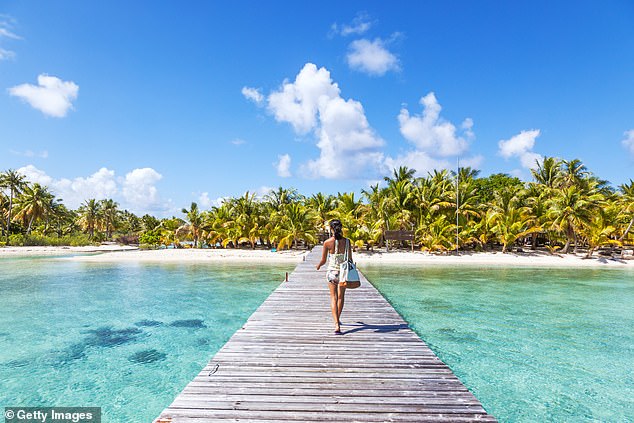 Jordan told how he caught one reality star having sex on the beach after a boozy night out – while his long-term girlfriend was at home. Pictured, stock image

Chris adds that it’s not always an easy ride, and he’s been left worrying that he could face jail if things go wrong.

He told of the time an ‘arrogant singer’ had a minor brawl with a guy in a bar after getting really drunk, and was so worried the Dubai police would be notified, he headed straight for the airport and flew straight home.

ARRANGING PARTIES TO DOING THE LAUNDRY

Jordan says that Mykonos is fast-becoming a favourite holiday hot spot among the stars – with the likes of Kendall Jenner and Little Mix’s Leigh-Ann Pinnock all enjoying getaways there in recent years.

He told how he’s made around £20,000 working with several UK stars over the years, helping various stars with everything from arranging A-list parties to doing their laundry.

Jordan recalled one occasion where he hired out an expensive boat for an international footballer and his friends, and was horrified to discover they’d got so drunk they smashed the windows, and put a big dent in one of the safety rails. All in all, the damage cost thousands of pounds to repair.

He continued: ‘I also caught a reality star having sex on the beach after a particularly boozy night out.’

‘I can’t help but feel bad for his long-term girlfriend, who he’s always posting about his love for on Instagram.’

fixers, R., reveal, stars, VIP, what
You may also like: