W. E. B. Griffin, who depicted the swashbuckling lives of soldiers, spies and cops in almost 60 novels, dozens of which became best sellers, died on Feb. 12 at his home in Daphne, Ala. He was 89.

The cause was colorectal cancer, said his son William E. Butterworth IV, who was also his writing partner.

Mr. Griffin estimated that he had published more than 150 books, many of which appeared on the best-seller lists of The New York Times, Publishers Weekly and other publications. His output included fiction for young adults and children’s books. According to his website, there are more than 50 million copies of his books in print in more than 10 languages.

Determining the exact number of books he wrote is not so easily done, however: He was a ghostwriter for many, and many others were published under a variety of pseudonyms, including Webb Beech, Edmund O. Scholefield, Allison Mitchell and Blakely St. James.

Even the name W. E. B. Griffin was a pseudonym; his real name was William E. Butterworth III.

His best-known books are under the Griffin name. The first was “The Lieutenants” (1982), which became the first installment in “The Brotherhood of War,” a nine-novel series that followed soldiers in the United States Army from World War II through the Vietnam War. Among his other series were “Badge of Honor,” about the Philadelphia Police Department, and “Clandestine Operations,” about the birth of the Central Intelligence Agency.

Mr. Griffin’s writing was straightforward and a bit wry. In an early scene in “Top Secret” (2014) — the first book in the “Clandestine Operations” series — Lt. James Cronley is seated in a car with the young woman he will soon marry.

“She turned to face him,” Mr. Griffin wrote. “Their eyes met. ‘Jimmy, you sound like my mother trying to reason with me. …’ Their conversation was interrupted when the proximity of their faces caused a mutual involuntary act on both their parts. A minute or so later, Jimmy said, ‘Jesus H. Christ!’ and Marjorie said, a little breathlessly, ‘Don’t let this go to your head, but as kissers go, you’re not too bad.’ ”

His fast-paced novels, rooted in history and chockablock with technical details, combined action, sex and patriotism and had a devoted readership. A profile in The Washington Post in 1997 described Mr. Griffin as “the grizzled griot of the warrior breed” and “the troubadour of the American serviceman.”

“Basically I’m a storyteller,” he said. “I like to think I’m a competent craftsman, as writers go, but I am wholly devoid of literary ambitions or illusions.”

His relentless pace — early in his career he sometimes completed four books a year — slowed somewhat in recent years. His son William became his full-time writing partner in 2006.

William IV said he intended to keep writing in the style that Mr. Griffin’s fans enjoy; a new book in the “Badge of Honor” series, “The Attack,” is to be published in August, with more novels, in that and other series, to follow. 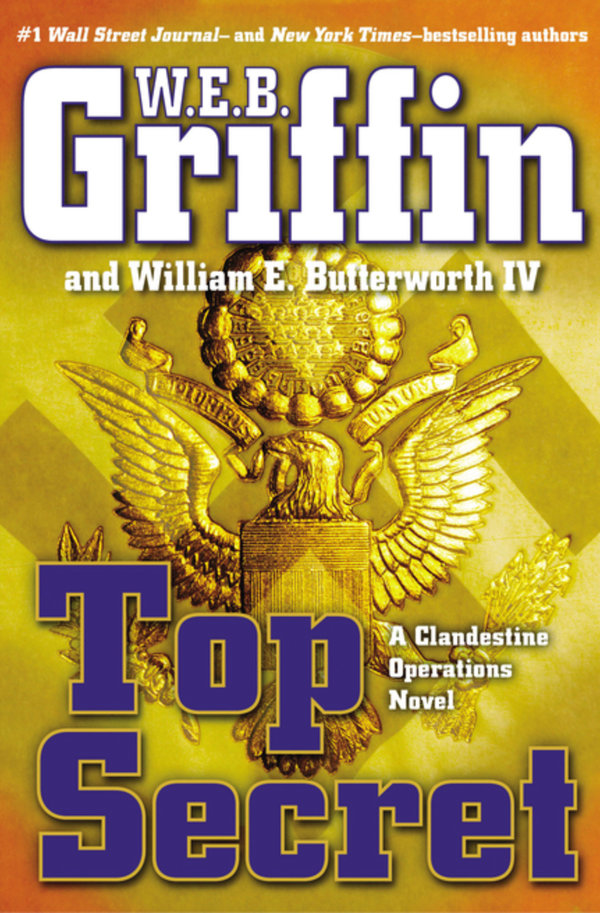 William Edmund Butterworth III was born on Nov. 10, 1929, in Newark. His father, William II, was a traveling shoe salesman. His mother, Gladys (Schnabel) Butterworth, was a saleswoman in a department store.

His parents divorced when he was a teenager, and William attended several East Coast preparatory schools before enlisting in the Army.

He served in Germany just after the end of World War II, becoming a clerk and typist for Gen. Isaac Davis White. After a stint in college in Germany, he re-enlisted and again worked for General White during the Korean War.

After the war, Mr. Griffin left the military to become a writer. He moved to Philadelphia, where he worked for a year as a corn oil and starch salesman, a job he despised. He soon moved to Fort Rucker in Alabama to work for the Army as a civilian technical writer.

He published his first book, “Comfort Me With Love,” about a young soldier’s adventures in Europe after World War II, in 1959. Two years later he left his job at the base to write novels and other books full-time.

Beginning in the mid-1970s he wrote several sequels to “M*A*S*H,” the 1968 novel, by the former military surgeon H. Richard Hornberger and the writer W. C. Heinz under a pseudonym, that inspired the movie and television show of the same name.

Though many were optioned, Mr. Griffin’s own books, under any pseudonym, have never been turned into movies, his son William said. One reason was that studios balked when Mr. Griffin insisted on maintaining creative control.

Mr. Griffin married Emma Macalik while he was stationed in Germany after the war. The marriage ended in divorce in the 1990s.

He later married Maria del Pilar Menendez, whom he had met on a hunting trip in Argentina. They had a home in Pilar, a suburb of Buenos Aires, and split their time between there and Alabama. She died in 2018.

In 2009 Mr. Griffin told The Philadelphia Inquirer that he felt especially proud of his novel “The Honor of Spies,” which was about to be published.

“It’s the best thing I’ve ever written,” he said. “Of course, I’ll feel the same way about the one that comes out next June.”