The nation's human rights chief has called on federal and state leaders to justify the emergency measures that curtail personal freedom amid a push to ease coronavirus restrictions.

Australian Human Rights Commission president Rosalind Croucher warned all governments could be at fault on basic freedoms including the right for parents and children to be reunited by entering or leaving the country. 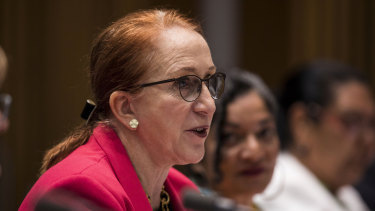 Professor Rosalind Croucher told Senate estimates she was concerned at the lack of transparency in justifying some emergency measures.Credit:Dominic Lorrimer

The warning comes as Prime Minister Scott Morrison convenes a national cabinet meeting on Friday that will debate whether to increase freedom of movement and allow more international flights to state capitals.

But a national deal appears unlikely as Victorian Premier Daniel Andrews delays any resumption of international arrivals after repeated failures in his government's hotel quarantine system.

Professor Croucher told a Senate estimates hearing on Thursday the commission had received 1200 queries about the pandemic and believed governments needed to reveal more about the reasons for their restrictions.

"I am concerned at the lack of transparency in explaining the continued justification for some emergency measures, and even for identifying precisely which level of government is responsible for some of them," she said.

"The checks and balances that ordinarily exist are integral to our democracy.

"Australians have been, and continue to be, exposed to potentially unnecessary restrictions of their rights and freedoms because of the lack of transparency and accountability."

In her opening statement to the Senate committee, she noted the commission could only scrutinise federal decisions and did not have authority in the states.

"Why have we not formally examined the public health orders imposing restrictions in Victoria? Because we do not have the legislative mandate to do so," she said.

Victorian Liberal Senator Sarah Henderson said the Andrews government's curfew, lifted at the end of September, was an example of a potential breach.

"Given there were no health reasons for the curfew, on the evidence this may constitute a serious breach of human rights," Senator Henderson said after the hearing.

Professor Croucher, previously the Dean of Law at Macquarie University, expressed her condolences to the families of more than 900 people who have lost their lives to the coronavirus and acknowledged the need to protect health.

But she said Australian governments may not be meeting Article 10 of the Convention on the Rights of the Child because they could not reunite parents and children in an "expeditious manner" into and out of the country.

She also noted the states were responsible for allowing passengers to land at their airports, with implications for the repatriation of citizens.

With about 32,300 Australians stranded overseas, Mr Morrison is hoping to use Friday's national cabinet meeting to increase the number of international arrivals who can land in each state capital including Melbourne.

NSW Premier Gladys Berejiklian warned on Thursday about the burden on the state from taking a large share of the 5575 international arrivals allowed each week under current rules.

"We've welcomed Australians back from all the other states. It's about time Queensland coughed up. I want them to pay their bill especially given they keep their border shut when they really don't need to," Ms Berejiklian said.

"When other states aren't respectful of that it does get your goat up."

The national cabinet meeting is due to discuss a review into hotel quarantine by former federal department secretary Jane Halton, who considered the relative performance of each state and territory in taking international arrivals.

Micromanipulation: the subtle control tactic to watch out for in arguments