Jon Hamm is one adventurous eater! The Mad Men alum was a guest on The Late Late Show With James Corden on Monday, October 15, and before sitting down for a chat, the actor and host played Spill Your Guts or Fill Your Guts, a popular Late Late Show game that requires participants to either reveal some personal information or eat something gross. 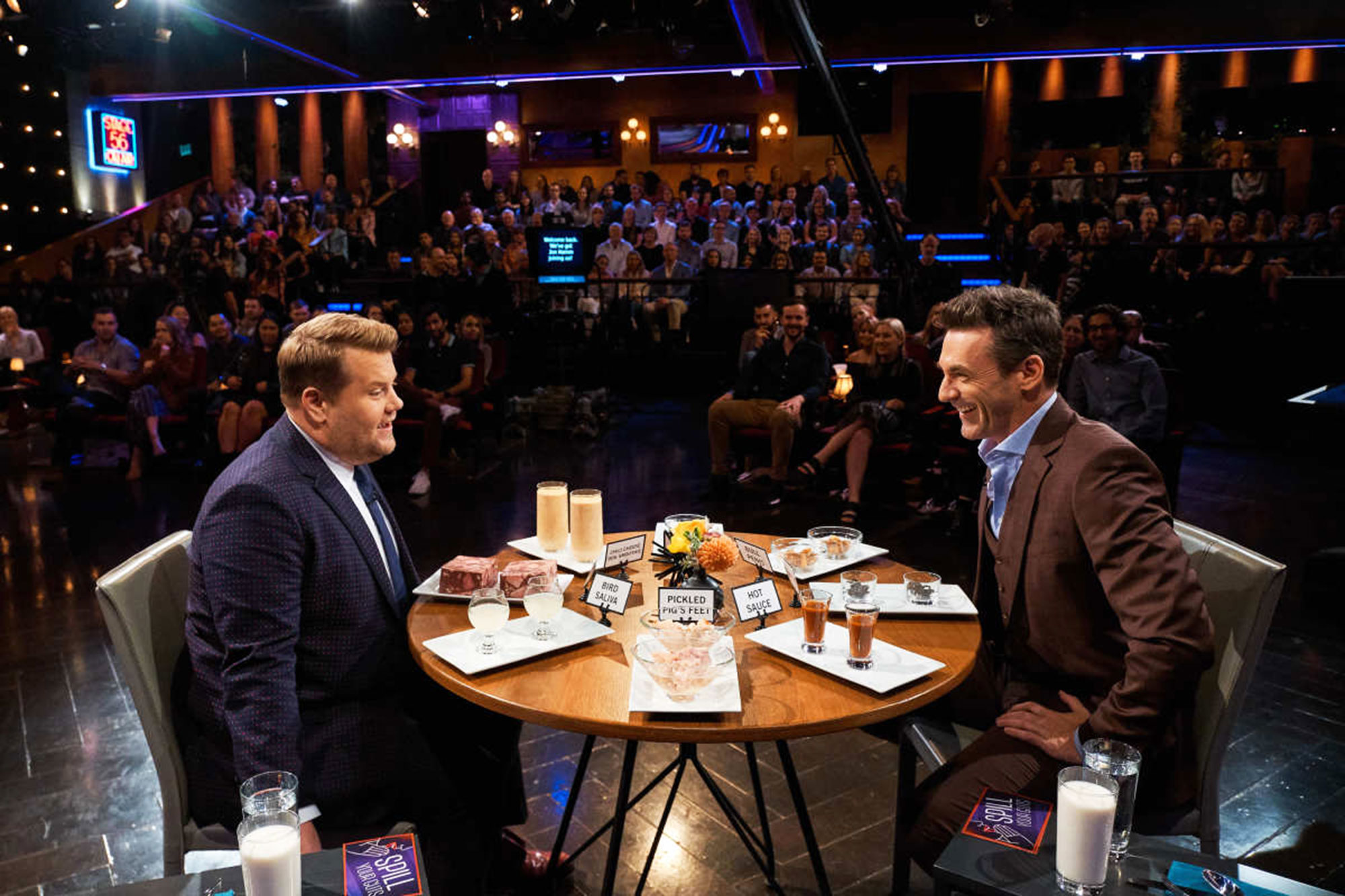 The array of foods before Hamm and James Corden was especially disgusting, and included fish eyes, bull penis, tarantulas, a chili cheese dog smoothie, cow blood and pork tongue jelly, bird saliva, pickled pig’s feet and hot sauce. Hamm kicked the game off by selecting the tarantulas for Corden and asking him to name his least favorite show guest.

Though Corden intimated he had a guest in mind, he ultimately decided to eat the dried spider instead of divulging the answer. The host, 40, then turned the tables on Hamm, 47, and asked him to rank previous Batmans George Clooney, Christian Bale and Ben Affleck from best to worst.

However, instead of giving the audience an answer, the Missouri native, who has expressed interest in portraying Batman himself, playfully told Corden, “This would be a conversation you and I would have, not on camera.” Hamm then proceeded to take several sips of the chili cheese dog smoothie, which he described as “thick.”

After Corden named his least favorite Jon Hamm movie (Tag) instead of drinking a glass of bird saliva, it was once again the Bad Times at the El Royale star’s turn in the hot seat. This time around, Hamm downed two glasses of hot sauce instead of naming one person he’s worked with that he never wants to work with again. “I do have an answer for this question,” the Golden Globe winner revealed. “But I won’t say it.”

And while Corden then chose to take a massive bite of cow blood and pork tongue jelly rather than rank some of his fellow late-night hosts, it was Hamm’s final turn that really has people talking.

Corden selected bull penis for his guest and then posed a really personal question about Hamm’s own member, asking him, “Show me with your hands how big the Hammaconda really is.”

“First of all, how dare you?!” Hamm said with a smile as he considered his options while Corden sang the lyrics to “Baby Got Back.”

“Are you sure you want to eat it?” the host asked. “Because my mom is in the audience and she only came because she wanted to find out how big the Hammaconda is.”

After waving hi to Corden’s mom, Hamm decided he’d rather chow down on bull penis than talk about his own, so he broke off a large piece and popped it in his mouth. Bravo, Mr. Hamm!

bull, eat, Hamm, Jon, penis, Watch
You may also like: