Follow
Home » Lifestyle » ‘We want them to succeed, not fail’: Junior MasterChef returns

‘We want them to succeed, not fail’: Junior MasterChef returns

First, the set designers hid all the booze behind wooden panels, transforming MasterChef's wine room into a child-friendly area with soft lighting and goose-patterned wallpaper. Behind each benchtop, they installed platforms for the shorter participants to stand on. Then they wheeled in a giant brass gong, which top-scoring contestants can bang to save themselves from elimination.

After a nine-year hiatus, Junior MasterChef is back – but don’t be misled by the title.

"We don't want it to feel like a kids' show that airs at 5pm," says executive producer Marty Benson. "This is prime time television for families." 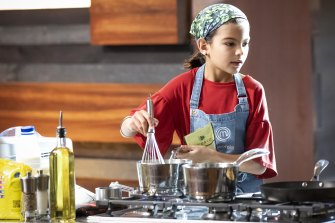 With new judges Melissa Leong, Jock Zonfrillo and Andy Allen at the helm, this year’s grown-up version of MasterChef averaged 1.42 million viewers nationally: its biggest audience since 2016. Reviving the kid-focused spin-off was an obvious choice for Network 10 but for Benson, it presented a few challenges.

By law, filming must be halted every 50 minutes to give the contestants – aged between 10 and 14 – a 10-minute break, plus one hour for lunch. Often, it took a whole day to film the set-up for a food challenge and another day to record the actual cooking. 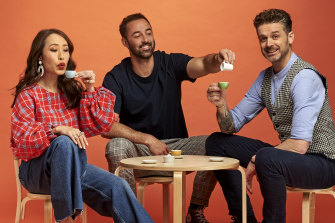 "That was an advantage for the kids because it gave them time to think about their dishes," Bensons says. "We want them to succeed, not fail."

This doesn’t negate the fact that Junior MasterChef is a competition.

"We have to give these kids feedback because we want them to improve," Allen says. "We can’t just say that everything is awesome and amazing all the time but we were always aware we had to be sensitive."

To single out a 10-year-old for eviction in front of their peers seemed needlessly harsh, so contestants are eliminated in groups of two or three. Benson even extended this rule to immunity prizes. "No one wants to be that kid who always wins and gets picked on for being the teacher's pet," he says. 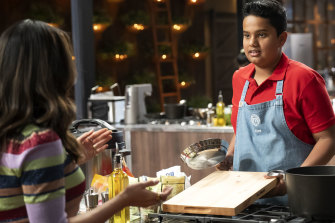 Tutors, nurses and psychologists are always on set while "spotters" stand near each bench during filming to take care of deep-frying and other tasks deemed too risky for minors.

11-year-old Georgia, who borrows cookbooks instead of novels from her local library, says she became friends with all the other young chefs.

"Even though it’s a competition, we were more focused on each other’s dishes than our own," she says. "If someone got stressed [during a challenge], we'd help them figure out what to do."

Georgia watched previous seasons of MasterChef online because the TV broadcasts finished past her bedtime. "But Mum says we can stay up late this year," she says.

Fellow contestant Dev, aged 13, has watched MasterChef with his parents for as long as he can remember. In his first episode of Junior MasterChef, he makes a lamb mughlai curry with saffron rice, raita and a smoked chicken kebab; a dish he learned from his mum Shuchi. "She’s my biggest inspiration," he says. "Everything she cooks is so flavourful."

Allen admits he was worried about the contestants' nervousness when the cameras began rolling.

"We [filmed the first scene] in the garden out the front and the kids were like deer in the headlights," he says.

"But soon they were saying things like, 'Oh, I’m doing a white chocolate mousse with a lime granita and a szechuan meringue,' and they were so entertaining. The other judges and I looked at each other with huge smiles on our faces because these are not dishes you normally associate with kids."

not, succeed, Them, to, Want, We
You may also like: