Wendi Deng and her daughters join dad Rupert Murdoch at an NYC event, as the teens are seen with stepsister Georgia May Jagger for the first time since their father married Jerry Hall

Rupert Murdoch and ex-wife Wendi Deng’s two teenage daughters accompanied them to a New York City charity event on Tuesday, where the they also posed for pictured with their stepsister, supermodel Georgia May Jagger.

The society luncheon marks the first time that Chloe, 16, and Grace, 18, were pictured in public with Georgia, 27, since their father married Georgia’s mother Jerry Hall in March of 2016.

The three girls appear to be getting along well, and smiled as they posed for pictures at the well-to-do event at Manhattan’s Plaza Hotel – which took place on the same day at Grace’s 18th birthday. 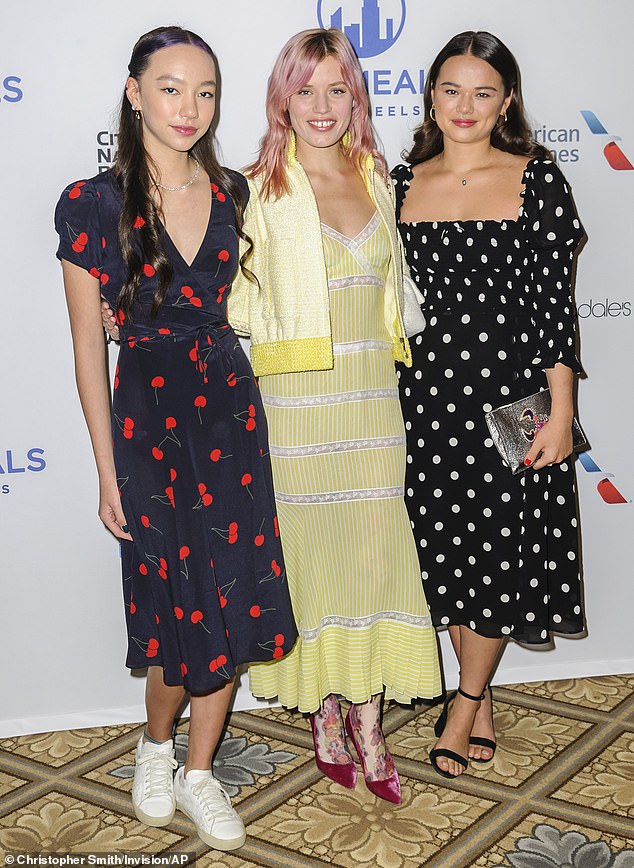 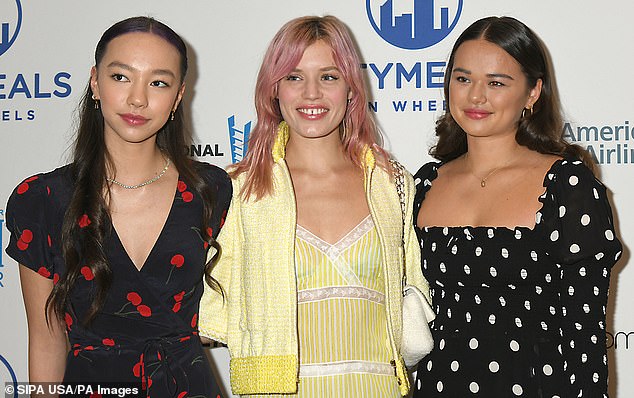 Smile! The three young women smiled and posed with arms around one another at the 33rd Annual Citymeals on Wheels Power Lunch for Women on November 19 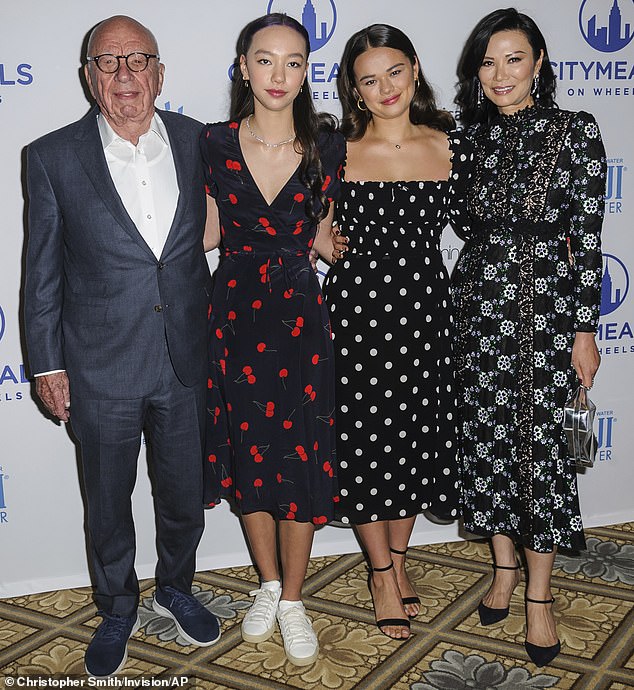 Support: Chloe and Grace also posed with their parents at the charity event at the Plaza Hotel 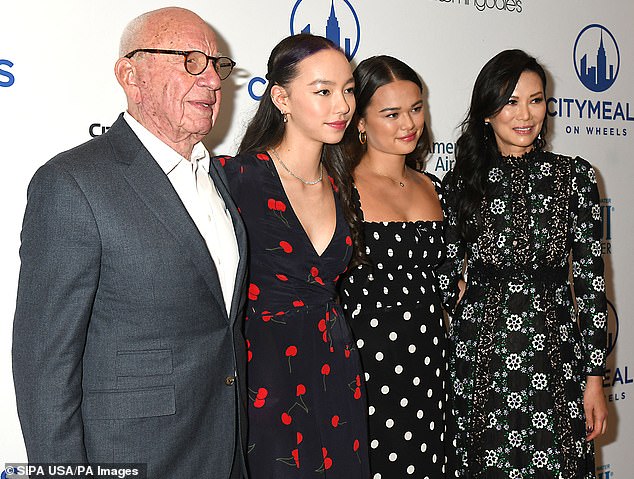 Coordinated: Chloe, Grace, and Wendi all wore print dresses for the occasion

Rupert, 88, and Wendi, 50, took their co-parenting public at the 33rd Annual Citymeals on Wheels Power Lunch for Women on November 19, smiling together for photographers.

They took a few family shots with their two daughters, both of whom wore tea-length printed dresses.

Chloe paired hers with sneakers, while Grace wore black heels like her mother.

They were joined by Georgia, who was colorful in a light yellow dress and matching jacket, which offset her light pink hair.

Chloe, Grace, and Georgia took a moment to pose together without Rupert and Wendi, smiling with their arms around one another.

While the stepsisters have no doubt seen each other privately since Rupert’s wedding to Jerry three and a half years ago, this is the first time they’ve been pictured together at an event with professional photographers.

They’d been altogether when their parents tied the knot in a low-key ceremony at London’s Spencer House in March 2016.

Grace and Chloe, who were 14 and 12 at the time, respectively, served as flower girls, dressing up in fairy tale-esque blue gowns and carrying baskets of roses.

Georgia, then 24, and her sister Elizabeth walked Jerry down the aisle while wearing more modern light blue dresses.

Jerry has four children with her ex, Mick Jagger: In addition to Georgia and Elizabeth, 35, there’s James, 34, and Gabriel, 21. 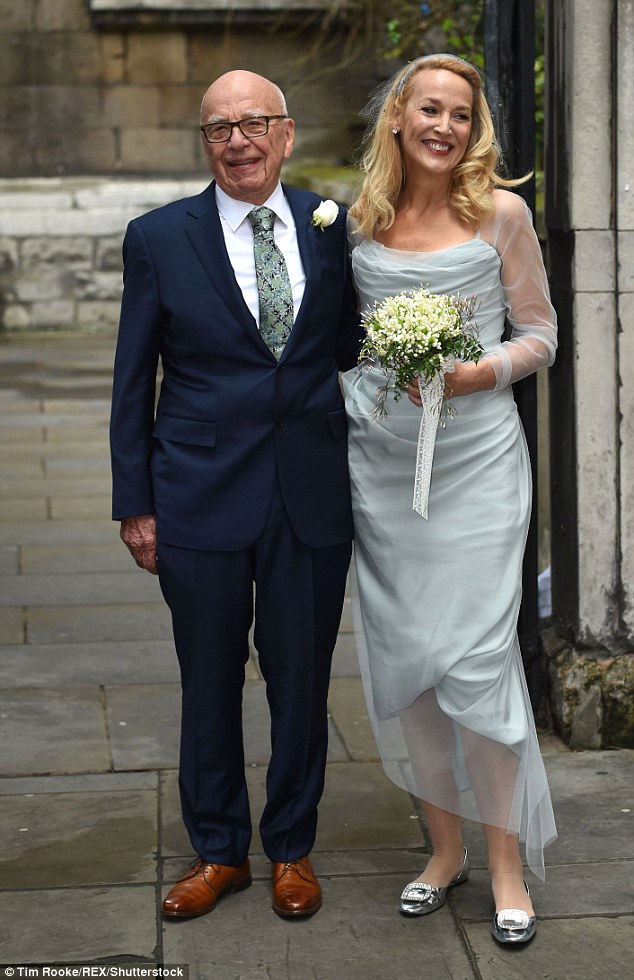 Couple: He and Georgia’s mother Jerry Hall tied the knot in March 2016 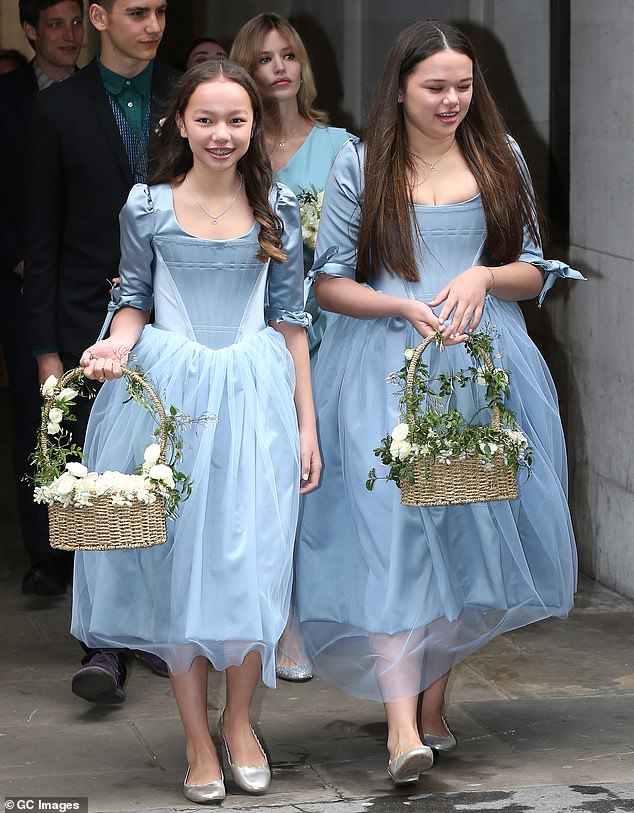 Flashback: It was the last time that Chloe and Grace (pictured front) were seen publicly with Georgia (seen behind her stepsisters) 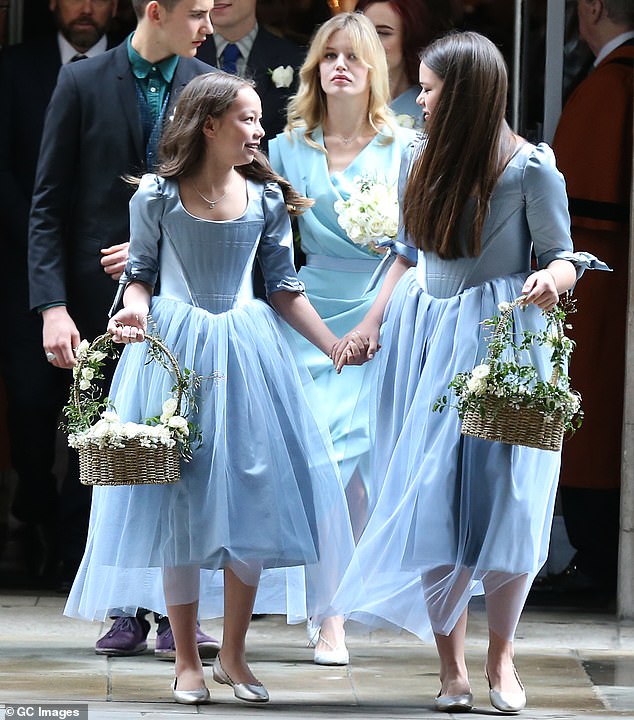 All in blue: The two teenagers were flower girls, while Georgia, a bridesmaid, walked her mom down the aisle 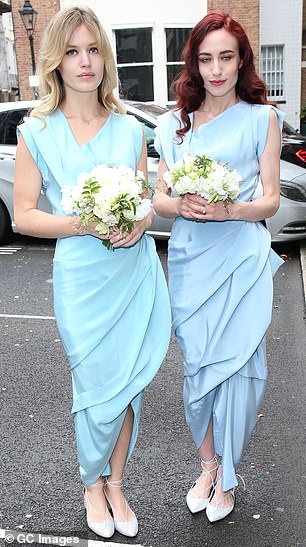 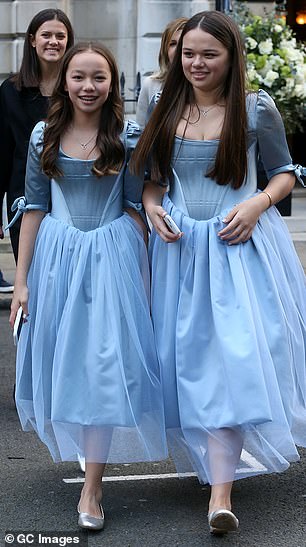 Mmatching: Georgia shared the honor with her older sister Elizabeth

Meanwhile, Jagger has several other children who are half-siblings to Georgia: Karis, 49, Jade, 48, Lucas, 20, and Deveraux, two.

Theirs is a blended family, and while Chloe and Grace haven’t been seen out much with Georgia before, the parents have attended events together.

In August, Mick, Jerry, Rupert, and Jerry and Mick’s daughter Elizabeth were all seen together at a celebration for Moraga Bel Air winery in Bel-Air.

Prior to Tuesday’s event, Wendi took to Instagram to celebrate her older daughter’s milestone birthday, sharing a series of photos taken throughout her children, while writing: ‘Happy 18th birthday [Grace].

‘Nothing in my life has made me prouder than watching you grow into an incredible person!! I am so proud to be your mother.’ 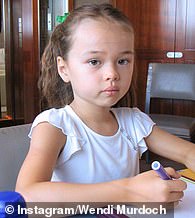 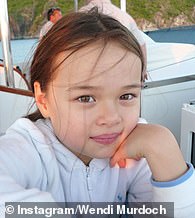 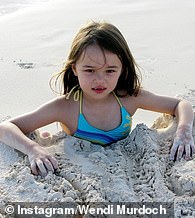 Birthday girl! Grace celebrated her 18th birthday on Tuesday, and her mother took to Instagram to mark the occasion with an adorable album of throwback photos 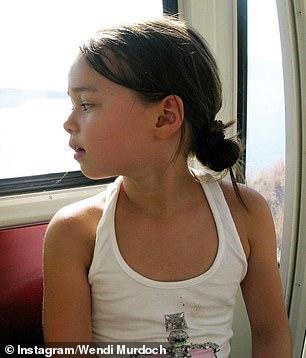 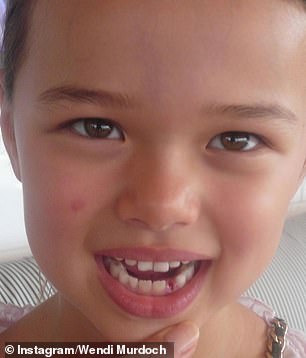 Heartfelt: ‘Nothing in my life has made me prouder than watching you grow into an incredible person!!’ Wendi wrote alongside the images, which were taken throughout Grace’s childhood 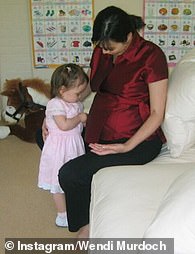 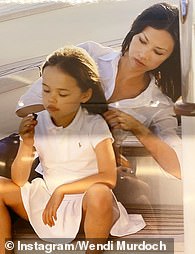 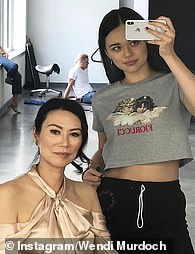 Emotional: The businesswoman concluded her sentimental post by writing, ‘I am so proud to be your mother’ 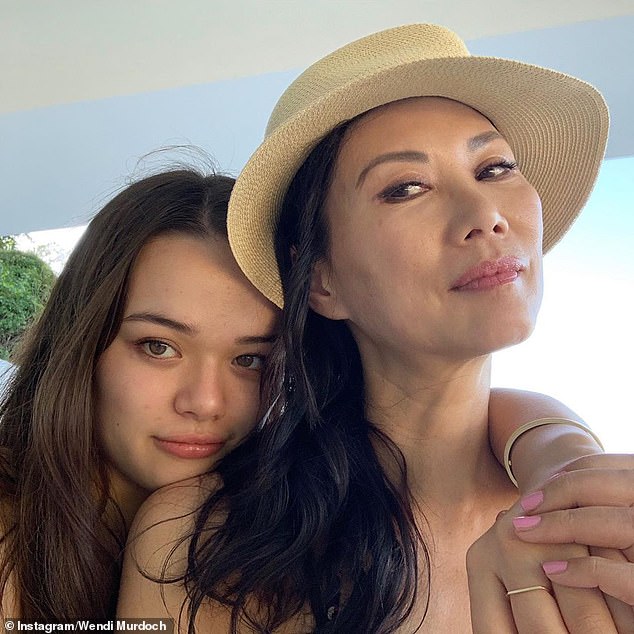 Popular: Wendi’s post quickly racked up thousands of likes, with several celebrities including Paris Hilton and Naomi Campbell commenting on the sweet images 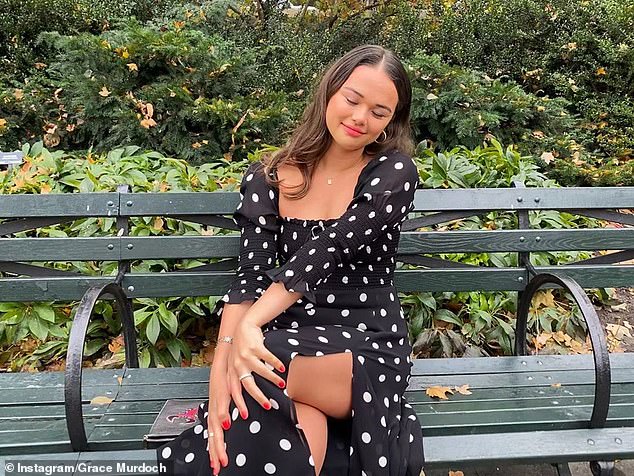 Special occasion: Grace also marked her milestone birthday on social media, sharing this image of herself that appears to have been taken shortly before the event

The heartfelt post racked up hundreds of comments, including several from Wendi’s A-list pals, including Naomi Campbell, who sent her own well wishes to the birthday girl, commenting: ‘Happy Birthday Grace.’

Sara Foster wrote, ‘OMG what a beauty,’ while Paris Hilton echoed that sentiment, simply penning ‘beautiful’ alongside the photos.

Grace also marked the special occasion on her Instagram with a much more concise post, sharing a photo of herself posing on a New York bench while wearing the same polka-dot dress she modeled at the event.

‘All grown up,’ she captioned the photo, before adding the hashtag #18.

It appears that the teen got the chance to celebrate her birthday in style earlier this week, with pictures from her Instagram account capturing Grace soaking up the sun in an exotic location with a group of girls from her exclusive New York high school.

Candid snaps show the girls lounging around on a boat, toasting drinks in a swimming pool, and running around on the beach.

Student, 22, reveals he was sent a bizarre 'exit survey' by his lover

Best Broadband Providers in the UK 2020 | The Sun

Queen's new equerry is a war hero who served in Afghanistan