Which TV star has two raw eggs for breakfast?

Which TV star has two raw eggs for breakfast and who has honey fresh from their own bees? Forget cornflakes… some celebrities’ breakfast rituals are truly bizarre

Most of us make do with a bowl of cereal or piece of toast for breakfast, but what do celebrities eat to start the day? Some insist on the same thing every morning while others enjoy faddy choices such as raw egg or chia seeds . . .

I used to have Nigella’s Turkish eggs (poached eggs on Greek yoghurt) every morning, but now I go for something simpler: gluten-free toast (I’m coeliac), topped with either avocado or a fried egg, and a cup of black Earl Grey tea.

I’m on a low-carb diet and I’m vegetarian, so my breakfast is half an avocado, half a dozen plum tomatoes, a chunk of cheese, a teaspoon of Marmite and a mug of tea. On special days I add Quorn sausages or a hard-boiled egg.

Usually, I can’t stand the sight of food in the morning because I’ve often spent the night dreaming about cooking. So I just have green tea and a Danacol anti-cholesterol liquid yoghurt drink. But when I travel, I enjoy a good breakfast: in Asia I have rice congee (Chinese rice porridge). In the UK, I love a full English — black pudding, sausages, fried eggs with Tabasco sauce.

My favourite way to start the day is with a plantation’s worth of espresso coffee beans, especially if I’ve been swinging from a chandelier the night before. But having no appetite for food indicates no appetite for life. By 11am I’m noshing on berries and plain yoghurt and by midday I’m probably devouring a fry-up of tomatoes, poached eggs, bacon and mushrooms. Nothing too healthy.

Chef and host of Saturday Kitchen and Food Unwrapped

I’m up at around 6.30am and squeeze a whole lemon into boiling water. I’m sure it keeps my liver clean and my cholesterol down — but it’s probably terrible for my teeth. Then I usually have cornflakes with full-fat Jersey cream milk or Coco Pops if I’m hung over. Sometimes I make sourdough toast with squashed tomatoes, garlic, salt and olive oil and I drink espressos until midday.

My breakfast is a bit crazy. I drink 170ml of goat’s kefir (grains fermented in goat’s milk). I wait 20 minutes then whizz together a banana, almond milk, powdered collagen, pea protein and mushrooms, and Huel (a powdered food with all 27 essential vitamins and minerals). 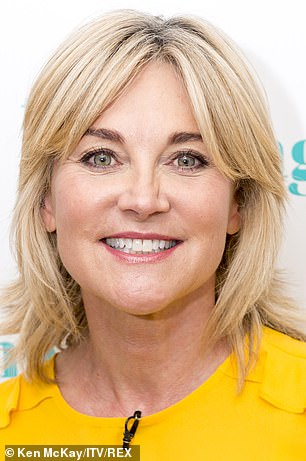 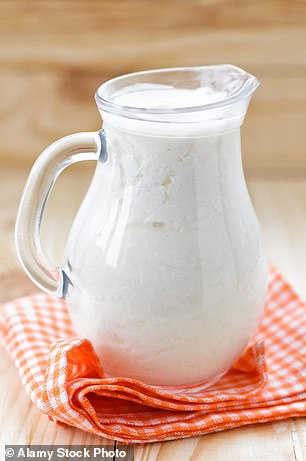 Anthea Turner, TV Presenter, said that her breakfast is ‘a bit crazy’. She drinks 170ml of goat’s kefir, which is fermented grains in goats milk

A croissant, English breakfast tea and a glass of orange juice.

I don’t eat until 11am at the earliest. Then it’s always porridge with five prunes, five apricots and milk with black treacle on top. I drink lots of tap water, nothing else.

I’m training to do a 160-mile cycle to Amsterdam to raise money for my children’s school, so my current breakfast is a shake with two raw eggs, protein powder, coconut butter, coconut milk, nut butter, raspberries and an avocado. Usually though, I have smoked salmon and scrambled eggs.

I always have my own home-made granola — porridge oats, pecans, desiccated coconut, chia and sunflower seeds, mixed spice, a small amount of maple syrup, some raisins and dried cranberries — topped with a spoonful of full-fat natural yoghurt, fresh raspberries and blueberries. To drink, a glass of freshly squeezed orange juice and an espresso.

At 4.35am, I sip a glass of hot water. Then, at 5am, I have a sliced apple with peanut butter and black coffee. During hair and make-up, I drink two more black coffees. 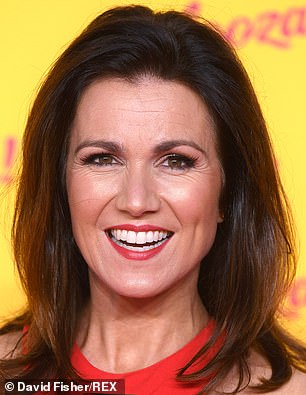 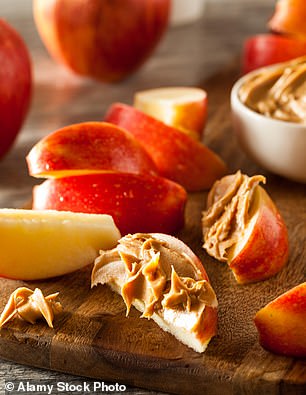 Susanna Reid, who is a presenter on Good Morning Britain, said she likes to sip a glass of hot water at 4.35am. Then she will eat sliced apple with peanut butter and black coffee at 5am

First I make coffee — instant, decaf, hot milk, then boiling water until the mug is two-thirds full. Then I do 15 minutes of yoga while I wait for my egg to boil. Next, I smother a slice of wholemeal toast with low-fat cream cheese, add half a smashed avocado and the egg, sliced, drizzled with balsamic vinegar and olive oil. Sometimes I let my partner boil my egg and he always draws a face on it — he has been doing this for 37 years, which is why I’m still with him.

I drink four glasses of water and one cup of green lemon tea with some raisins. I am a vegan so eat porridge made with almond or soya milk, a banana and figs. I walk a lot so need carbohydrates for energy.

At 7am, I get up and immediately tuck into smashed avocado on toast with sun-dried tomatoes and a home-made ginger shot. 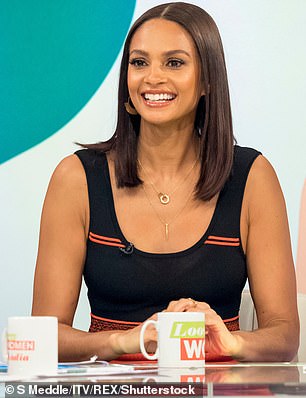 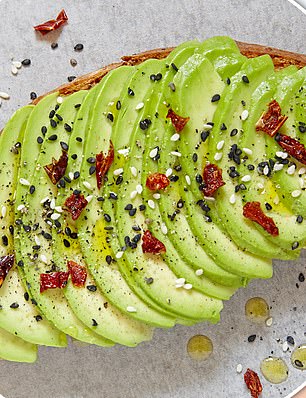 I make myself a cup of builder’s tea at 7am. I’m not really a breakfast person unless someone else makes it for me so I like to go to the Gleneagles Hotel near where I live for smashed avocado on toast with a poached egg and streaky bacon, plus fresh juice or a smoothie.

A bowl of granola with a couple of teaspoons of brown sugar, or porridge with honey, and a glass of orange juice to wash down my supplements (six in all, including a multivitamin and probiotic).

I always have rye toast with some very good Cretan olive oil and a poached egg with Tellicherry peppercorns and Maldon salt.

I drink a cup of tea and a multivitamin Berocca before I leave for the studio at 4am. Then I have porridge with honey, nuts or raisins, and some fruit at 5am before hair and make-up and grab a cup of coffee before I go on air at 8.30am. At 9.30am, as soon as filming stops, the crew and I are like wolves, eating all the food left over from the cookery demonstration.

The alarm goes off at 6.50am and I make a cup of decaffeinated Earl Grey tea. For years, I ate marmalade on toast every day, but now I have granola with fresh fruit, honey and yoghurt.

I make a coffee when I get up and give myself time to sit and think. Then I’ll eat a piece of toast, or scrambled eggs and avocado.

When I’m writing, I get up at 4.30am. I make a strong black coffee with two sugars then start work. At about 7am, I have another coffee, and some butter and Marmite on thick, seedy toast. If my writing is going well, I like a second breakfast a couple of hours later.

At 6.30am, I have cereal with a glass of orange juice. If it’s a big training day, I might have toast as well. At 9.30am, I have the rower’s famous ‘second breakfast’: two slices of toast with scrambled eggs or a bowl of porridge with seeds.

Freshly squeezed orange juice, muesli, plus raspberries and blueberries and chopped banana, topped with low-fat yoghurt. And coffee to get me going!

During rehearsals for a show, I catch the train to London at 8.20am after the school run and I’m lucky if I have time for a proper breakfast. Usually, I have a double espresso with a granola bar on the go or, more frequently, a cinnamon-swirl bun — I have a very sweet tooth.

When I’m not on set, I start the day at 6.30am with hot water, lemon and fresh ginger, before going to yoga. At 9am, breakfast is porridge made with goat’s milk.

Steak and eggs is the best breakfast. And if I have a hangover, it’s a fry-up and a bloody mary.

At 7.15am, I have two boiled eggs or a vegetable omelette, and at least two cups of normal tea and one decaf before catching the train to work.

Eggs are the best breakfast food ever, full of minerals and protein and filling enough to stave off mid-morning snacking. I also love French toast but avoid the sweet version with maple syrup and have some with cheese and tomatoes. 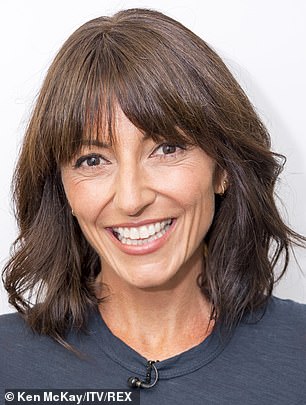 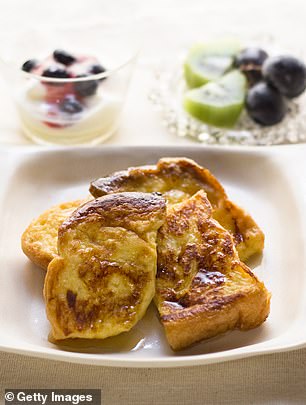 Davina McCall, a TV presenter, said that eggs are the best breakfast food ever. She eats French toast in the morning to help stave off hunger

My favourite is a two-egg omelette with chilli, tomatoes and coriander. But I have a pathological fear of hard-boiled eggs. It’s very distressing to think of a hard-boiled egg being included in any meal without my knowledge.

Normally I have black coffee and porridge with mixed berries. Porridge is my speciality — I make it with milk and topped with banana, brown sugar and a big lump of butter in the middle.

I start the day with a pint of hot water from the kettle on the Aga, then do half an hour of yoga. I really enjoy breakfast and often have yoghurt with fruit from the garden and honey from our bees. Or I might have eggs from our chickens with home-grown chillies. I have lots of strong tea. 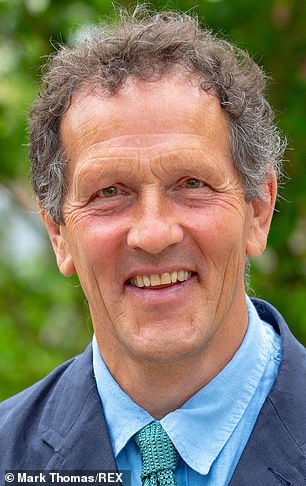 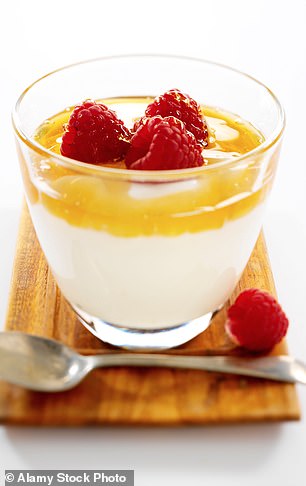 Monty Don, TV gardener, said that he does half an hour of yoga in the morning and then has a yoghurt with fruit for breakfast