A woman who collapsed and awoke six weeks later with complete memory loss has revealed her remarkable recovery ten years on.

Tracey Melinda Deimert, 47, from Bridgewater, who collapsed on 28 September 2009, has told how ‘strange’ it was having to relearn to love her husband Garry, 49, and her children, Cameron, 20, and Bradley, 14, again.

Now, being cared for daily by Brunelcare carers, Tracey feels her life a decade later is finally getting back on track – and she’s delighted to be making new memories with her sons.

Speaking of her new favourite memories, she explained: ‘There’s quite a few. Holidays to Woolacombe have been fab!’

‘Generally building new experiences and watching them grow up is my favourite. Seeing Cameron start his new job, seeing Bradley play rugby. It’s all so magical.’ 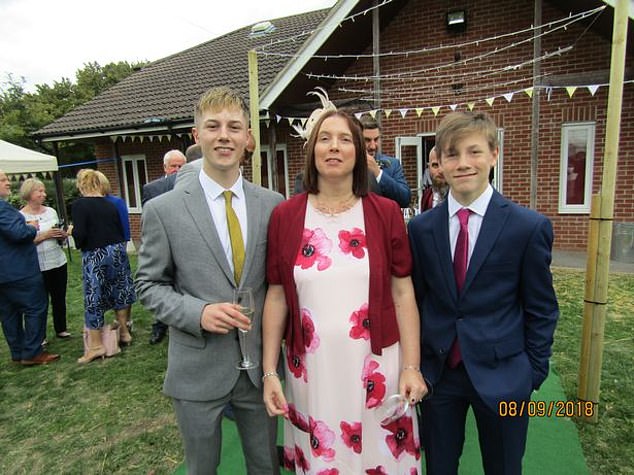 Tracey Melinda Deimert, 47, from Bridgewater, who collapsed on September 28 2009 and awoke six weeks later with complete memory has told of her recovery ten years on. Pictured with sons Cameron, 20, and Bradley, 14, last year 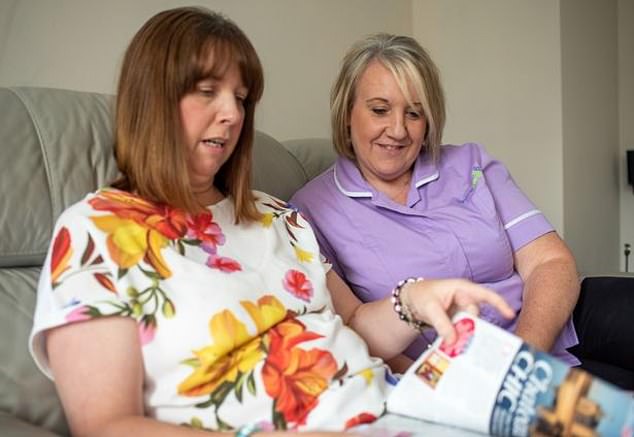 The mother-of-two is now cared for daily by Brunelcare carers (pictured) – who she has praised for helping with her improvements. Tracey has now learned to read again

‘Learning to interact with my children and re-love them was very strange. I did however have a motherly instinct towards them when I first saw them, but didn’t know who they were.’

‘I love them more than I ever have and I really enjoy building new memories with them.’

And mirroring Hollywood film, The Vow, starring Rachel McAdams — she has fallen in love with her husband all over again, too.

‘It was very strange at first – I remember thinking Garry was the nicest man ever and I can see why I would have fallen in love with him,’ she explained.

‘It was easy getting to know and relearning to love Garry, it was like I had never fallen out of love with him.

And while Tracey is slow getting her motor skills back, she can now read, watch series and remember each episode.

‘I’ve improved so much over the past ten-years,’ she explained. ‘I have a sense of independence that I didn’t think I would ever get.’

‘I know how to read books, watch TV series, doodle and listen to music. I love music and can remember all the words to my favourite songs.’ 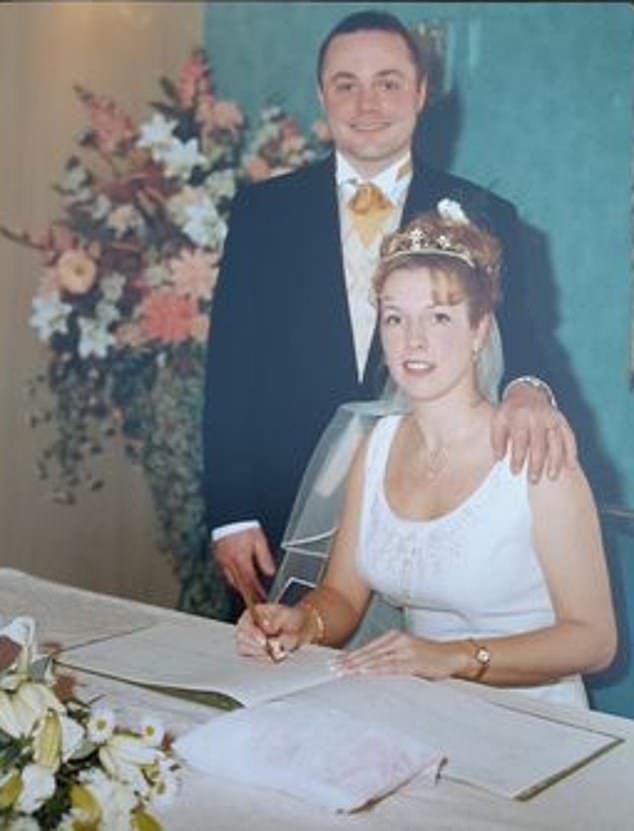 Following the sudden collapse and mirroring Hollywood film, The Vow, starring Rachel McAdams — Tracey had to fall in love with her husband Garry, 49, all over again. Pictured on their wedding day 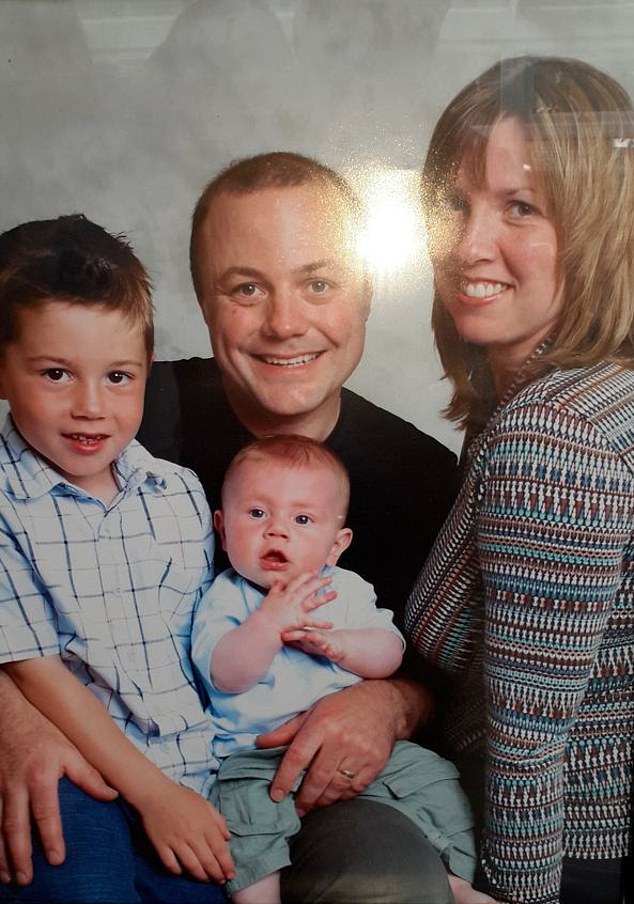 She continued: ‘I do struggle with my hand-eye coordination but I’m hoping this will improve.’

‘I can now do the housework, washing and go for walks. I’m hoping I can improve as much as I have done this decade in the next.

Doctors had not expected Tracey to survive when her heart inexplicably stopped beating in September 2009, causing her to collapse one afternoon shortly after she’d taken the boys to visit her parents, Sue and Trevor.

It took medics almost an hour to resuscitate her, and they warned Garry her brain had been starved of oxygen for so long she would almost certainly remain in a persistent vegetative state.

‘Before the collapse there were no symptoms at all, it was like an on-off switch had been triggered in my head,’ she said. ‘I don’t remember anything six-weeks later. Nothing at all, I didn’t know anything or who anyone was, my name, my age. It was scary.’

But Tracey confounded all expectations. After a month, her eyes flickered open and she continued to gradually improve. Ten months later, she returned home from hospital to her family home.

However, the former dispensing optometrist couldn’t remember anything of life before she fell ill; not the day they met at secondary school, their sons’ joyous births, nor her house.

‘When I left the hospital to come home, I didn’t know where I lived,’ she explained. ‘I had a sense that this was my house but I didn’t know it.’

‘I would say to Garry: “Oh this house is lovely, I like this and this etc,” but I couldn’t remember every living there but it did have a really homely, familiar feel. 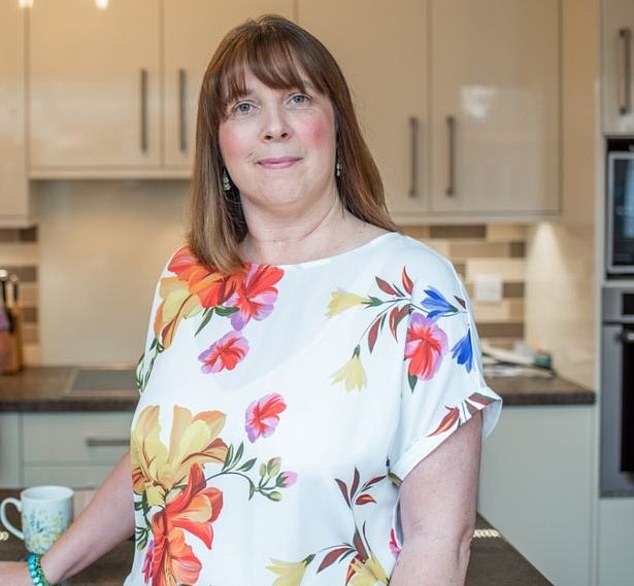 Tracey (pictured now), who is a former dispensing optometrist, now helps out at a day centre for the over 50’s once a week – something she couldn’t have done before 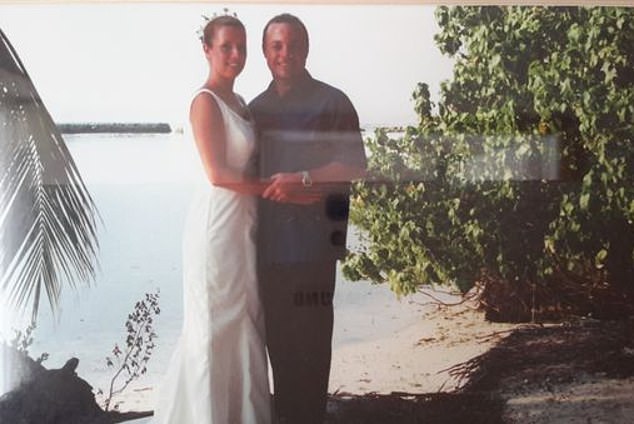 Following her collapse, Tracey lost complete memory – including of her wedding day to husband Garry (pictured)

As for history and current affairs, she knew nothing of the 9/11 terrorist attacks and couldn’t tell you who Queen Victoria was – nor did she know her husband Gary.

‘My life changed completely,’ said Tracey. ‘When I first came around I would simply sit down and that was all I could do.’

‘People would have to help me eat, drink and I had to learn how to interact all over again. As time has gone on, I have learned to be a lot more independent and my day-to-day routine is helped massively by Brunelcare Carers who help me with the house work.

Now, Tracey helps out at a day centre for the over 50’s once a week, something she couldn’t have done before.

‘I started helping out in the day centre about four-years ago,’ she explained. ‘I was wanting to help people as much as people have helped me.’

‘I wanted to put my message across to people to not give up. It’s also nice and social too. It’s now my job once a fortnight and it gives me a purpose.’

Remarkably, despite not being able to remember the first 37 years of her life, the mother-of-two still has a positive outlook.

‘I’m a very positive person in general – I’ve always been a fighter, this has remained since before the accident and something I remember about myself,’ explained Tracey. ‘I have several sayings, my favourites are, “never give up” and “never say never.”‘

‘She gets frustrated but generally it’s about helping everyone. She never gives up and always keeps on going.’ 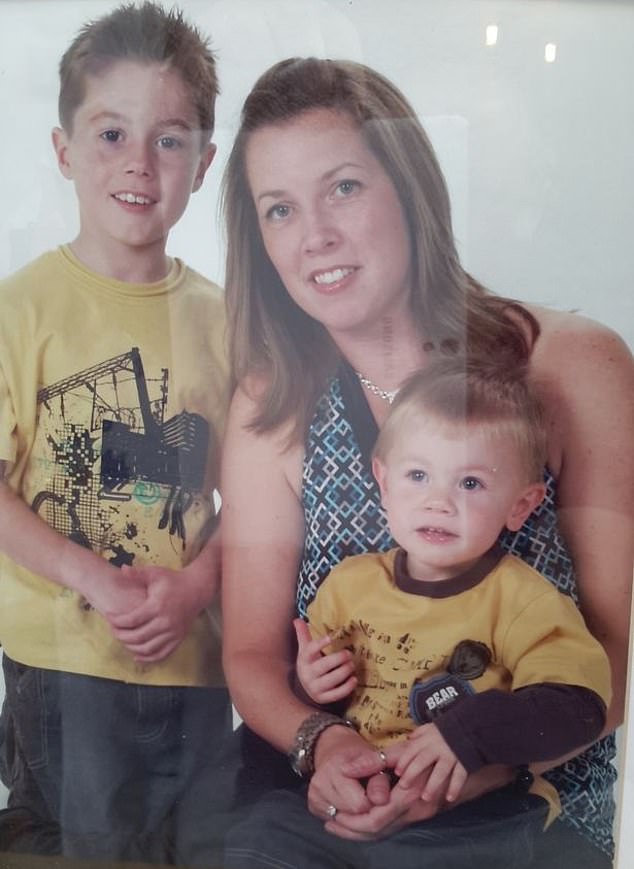 And, awoke, collapsed, Who, woman
You may also like: