Wordplay: From mockery to dinkum ockery

Care for a wedge of savoury mock chicken pie? Sounds delicious when you say it fast enough. Miss M. Bell of Adelaide provided the recipe back in 1946, a postwar dish published in The Australian Women’s Weekly:

Add one onion, three or four slices of stale bread, one egg, one tablespoon chopped parsley etc. Throw in the thyme, the salt and pepper, and Bob’s your uncle, not forgetting the pound of tripe, better known as pseudo-chook.

Mockery was rife back then. Lauren Samuelsson, a history postgrad at Wollongong University, has based her PhD on the clout the Women’s Weekly wielded on food culture, unearthing as much gold as imitation gold. Among the bogus dishes were mock duck (pounded rump), mock ham, mock marzipan and mock oysters. 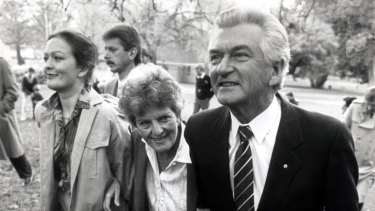 Bob Hawke was also pivotal in popularising do your lolly, coming the raw prawn, economic rationalism and the clever country.Credit:Sebastian Constanzo

As for reasons behind this similitude, Samuelsson's audit also tallied poor man’s pate de foie gras, and whipped austerity cream. Wartime habits promoted frugality as much as improvisation. I gleaned this genuine nugget from Ozwords, the biannual newsletter of The Australian National Dictionary, a gazette celebrating this continent’s bona fide tongue.

Still with chickens, one article explores chookas, the good-luck wish relayed to actors. By itself, good luck the phrase is deemed so plain as to court doom, hence the popularity of more oblique blessings like break a leg, or toi toi toi in operatic circles. Meantime Australia’s variation likely relates to the lavish delicacy of a real chicken dinner, back when tripe pie boasted an alias.

Ozwords is a linguistic digest that doesn’t take itself too seriously. For every meaty feature on old recipes or two-up slang, there’s a back-page contest determined to turn English inside-out. A recent zinger ockerised film titles, such as Sandgroper Yarn (West Side Story) and Knees-Up With Dingoes (Dances With Wolves).

Did I say zinger? Ozwords’ latest cover-story toasts the colloquial bequest of the Silver Bodgie, alias Bob Hawke. Our late leader was a bloody goldmine, as Dr Amanda Laugesen discovered, the director of the National Dictionary Centre. More than the source of such citations as sherbet and two-bob lair, Hawke was also pivotal in popularising do your lolly, to come the raw prawn, economic rationalism and the clever country. Evidently the bloke knew how to engage both ends of the room.

Other Australian lives have bestowed other expressions, or cemented usage at least. Julia Robinson amassed a grab-bag glossary from homegrown memoirs. Michelle Payne, say, the champion jockey, alerted lexicographers to green whistle (a quick-fix inhaler to relieve pain) and no carrots (when a horse is spent).

Michael Mohammed Ahmad’s novel The Lebs (Hachette, 2018) yielded shu cuz (a greeting) and the joyous idiom of being more Aussie than beetroot. As for Gareth Evans, another career polly, think tick-and-flick (routine approval of an agenda item) and silly-shirts photo-call (the APEC group shot).

Fossicking, you’ll find family words (windscreepers, Presbyterian crossings) plus shearing terms (flea taxi for a dog, and tomahawk for a rough fleecing). You’ll learn Queensland skinks scuttle under the byline of scrub mullets, while Mel B Spurr, a London vaudevillian touring here in 1903 is deemed the progenitor of the don’t-argue (the facial fend-off) and not the Huttons smallgoods campaign that made it common knowledge a few years later.

dink, from, mockery, to, Wordplay:
You may also like:

Try these super slimming summer soups from the Hairy Bikers

The Bloopers Keep Coming For News Reporters Working From Home

Can coronavirus spread in water? Summer safety warnings during the pandemic

Prince William and Kate Middleton Do Not Want Princess Charlotte to Return to School Just Yet, Source Says