Yoga teacher, 27, whose face was left paralysed and scarred by a road accident reveals she would break down in tears every time she looked in the mirror

A woman whose face was left paralysed and scarred after a horrific accident has admitted she would break down in tears every time she looked in the mirror in the aftermath.

Physiotherapist and yoga teacher, Lisa Monn, 27, who lives in Zürich, Switzerland, was 24 when her bike collided with a car, leaving her with severe cuts to her whole face, broken bones and a damaged facial nerve.

Since then she’s had three surgeries and is still learning to fully accept the accident, which left her with facial paralysis and scarring for life.

Lisa was collecting berries with her friends in August 2017 when the accident happened, and was rushed to hospital, with the adrenaline keeping her unaware of the severity of her injuries.

She spent ten days under the watchful eye of doctors who said she was lucky to survive. 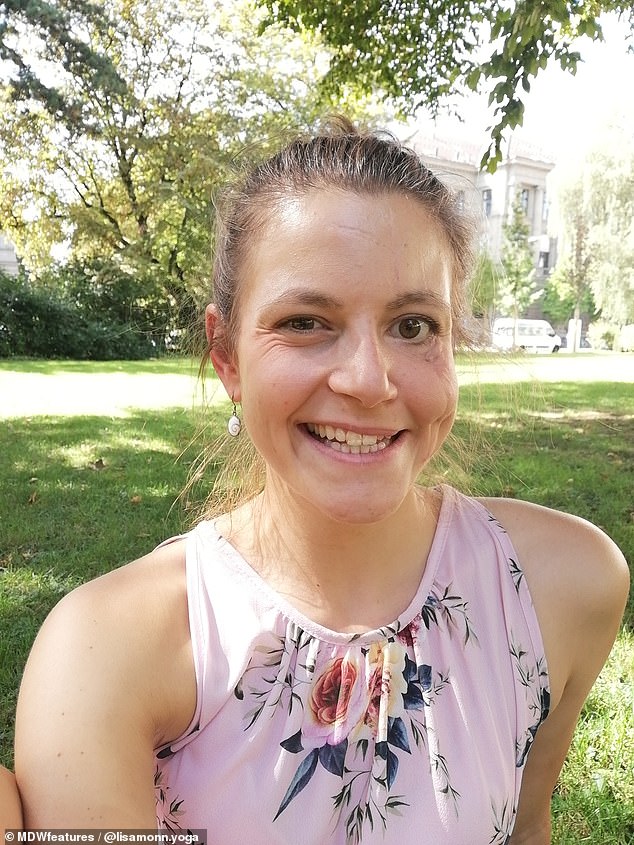 Physiotherapist and yoga teacher, Lisa Monn (pictured) 27, who lives in Zürich, Switzerland, was 24 when her bike collided with a car, leaving her with severe cuts to her whole face, broken bones and a damaged facial nerve 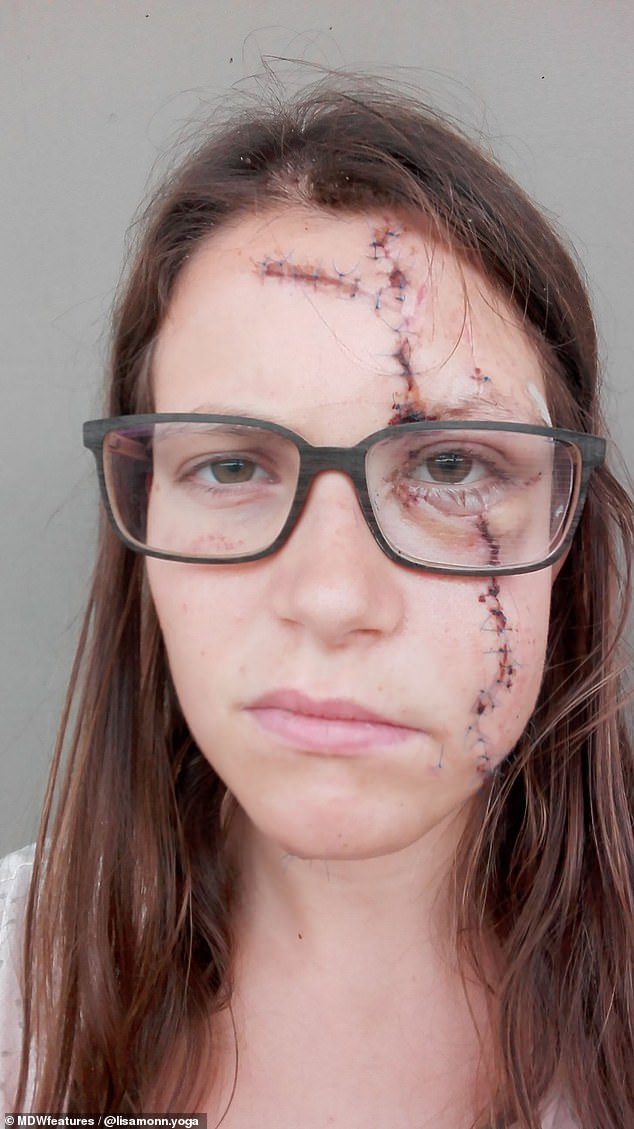 Lisa spent ten days in hospital following the accident, with doctors saying she was lucky to be alive (pictured after her accident)

The accident left the then 24-year-old with destroyed tear ducts, deep tissue cuts from the top to the bottom of the left side of her face, fractured zygomatic, maxillary and orbital bones, and traumatic facial paralysis due to nerve damage.

‘In August 2017, I had an accident. After being with my friends to collect berries in the forest, I hit a car with my road bike and got badly injured,’ Lisa said.

‘I cut my whole face, broke several bones and badly damaged my facial nerve. At the time, it was not clear if my eye and brain were okay or whether I would survive the whole accident.

‘I was completely under adrenaline and luckily didn’t understand the severity of the situation. I spent ten days in the hospital and had two surgeries. 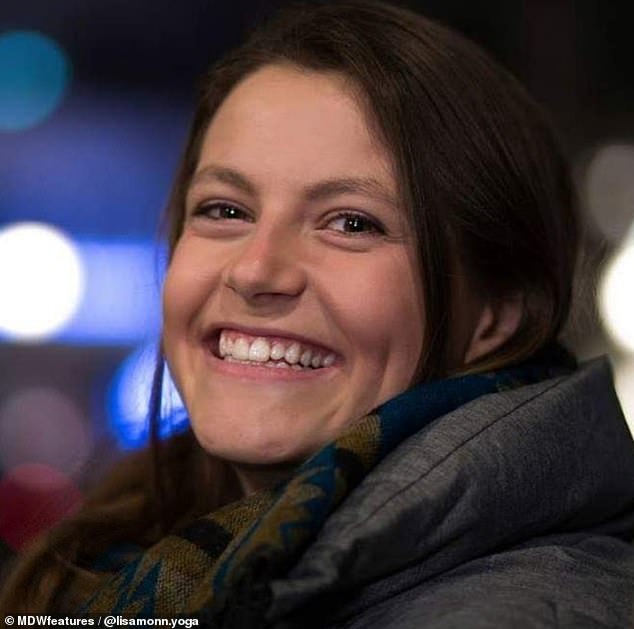 She underwent two surgeries at the time which attempted to repair her facial nerve, suture her entire face, and reset her bones.

Another surgery just over a year later which involved an injection of her own body fat under the skin in an attempt to soften her scarring and the removal of metal implants.

‘The doctors could fix my facial nerve, sutured my whole face and fixed my bones. My eye, my vision and my brain were all good. I was so lucky to have survived all that with only a big scar and traumatic facial paralysis.’

Lisa can vividly recall the first time she looked in the mirror after her accident and said she was shocked with the face she found looking back at her. 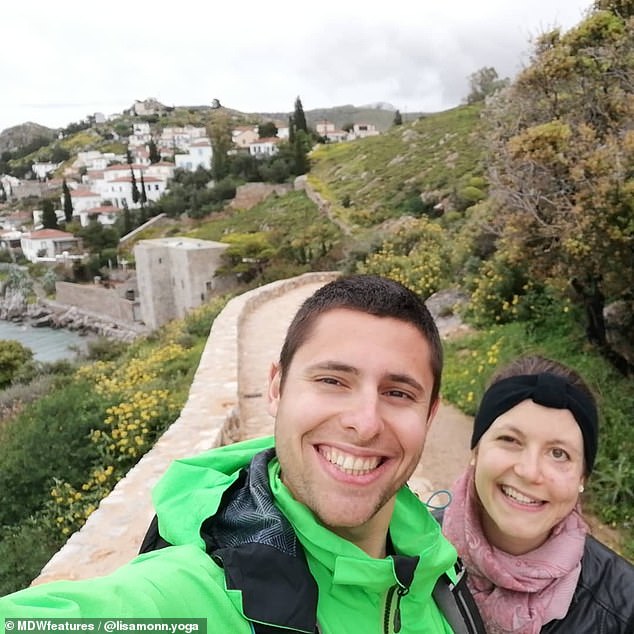 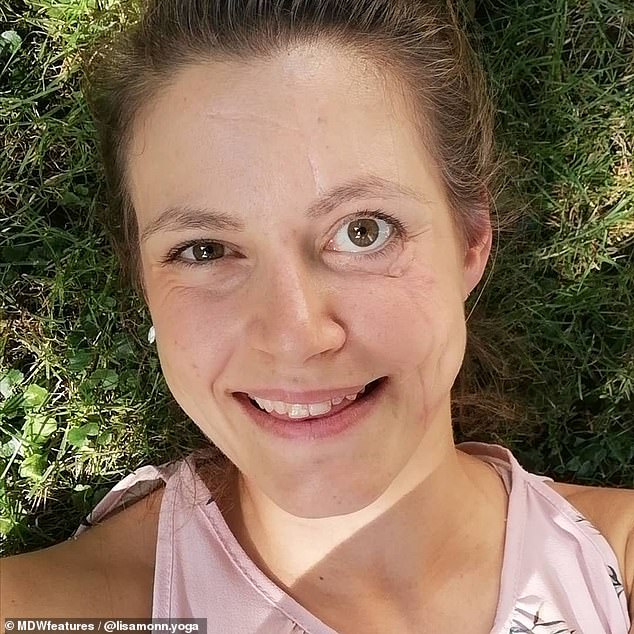 Lisa cried about her scars for months following the accident, but eventually learned to accept her new appearance (pictured now)

She recounts realising why her friends and family were similarly shocked when they saw her. Lisa struggled to look in the mirror after this, and often found herself crying at her scars.

‘The first time I saw a mirror was after waking up from the surgery. I asked the nurse immediately for a mirror,’ she said.

‘It was a strange feeling. It didn’t look like me and I understood why everyone was so shocked seeing me before the surgery. The scar was all over my face and my eye was completely surrounded by stitches. But I also remember me saying “well, that’s me now.” 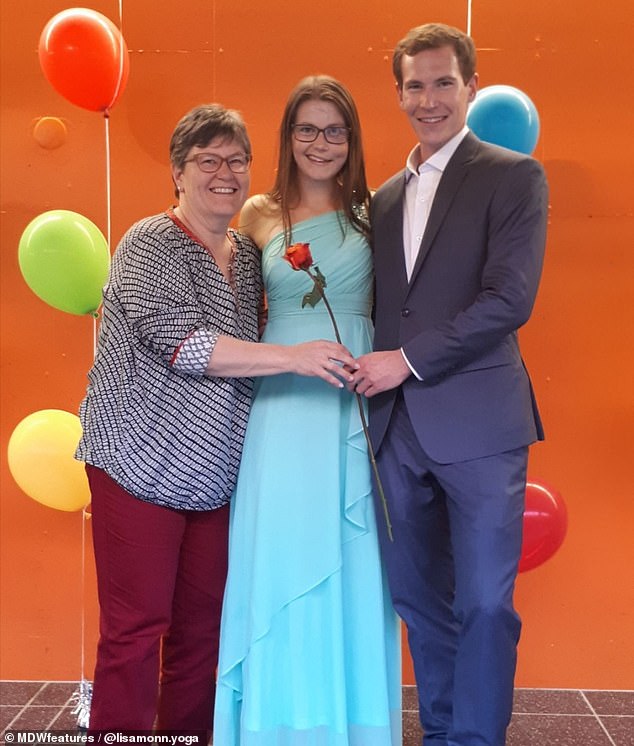 The following months were filled with horrified glances in the street from strangers, particularly from children, while Lisa tried to rebuild her fragile confidence.

‘This process to truly accept [myself] took a while. The next weeks and months, I often cried when I saw myself in the mirror or pictures of myself but at the same time I was so grateful that I was still alive and that I didn’t hurt my brain or my eye.’

After leaving hospital, Lisa avoided people and especially children who she said she did not want to ‘scare’ with her new appearance.

‘In the hospital, I had already managed to accept a lot of what happened. However, I really tried to avoid people and especially kids seeing me. I didn’t want to scare them,’ she said. After the accident, Lisa took some time to focus on her mental well-being and said yoga helped her heal emotionally (pictured in front of the Taj Mahal in India) 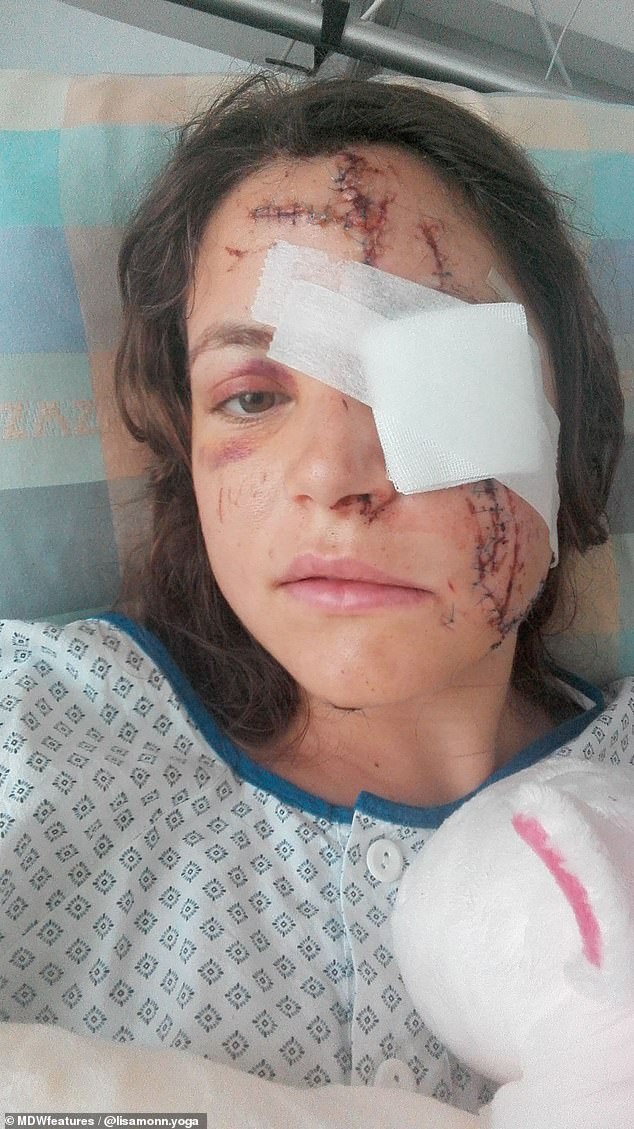 ‘In the beginning, children and even babies looked really weird at me. They were confused because I didn’t look normal, I guess.

‘My face was swollen, my scar pure red, my smile only on the right side, my left eye without movement. This is confusing. It is not what we know as normal.’

The physiotherapist and yoga teacher now feels it is her mission in life to inspire others who’ve had similar experiences to her and does so through her work after she discovered yoga as part of her recovery process.

‘After my accident, I did some meditation and breathwork which helped me to calm down from my fears and pictures in my mind from the accident and from my whole trauma,’ she said. 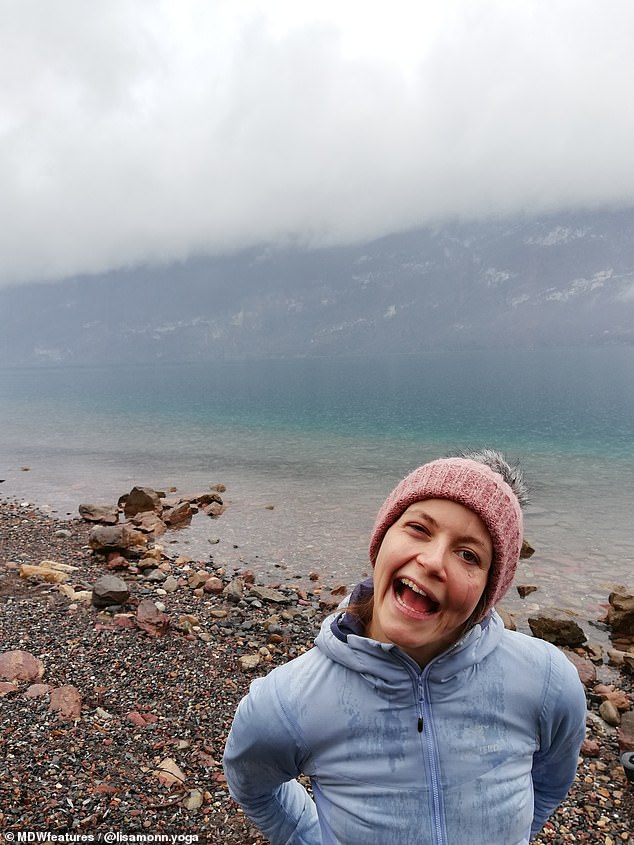 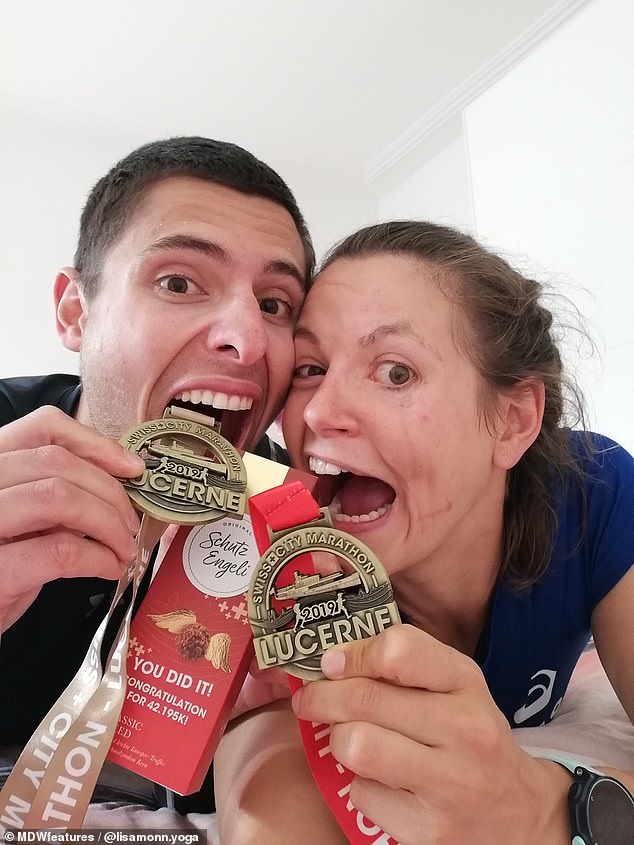 Lisa said that while her face did not look like the way she used to, she had learn to accept it. Pictured with Alex after the Lucerne 2019 city marathon

‘I was writing a lot in my journal to bring my thoughts out of my mind and organise them on paper.

She now passes on the knowledge she learnt during this time to her students as an online yoga teacher.

‘I knew from somewhere deep inside of me that the only person who was able to help me out of my situation was myself. So, I decided to attempt an intense yoga teacher training course.

‘Due to my accident, I had a gap in my internships, which were part of my studies to become a physiotherapist.

‘This gap was perfectly filled by a lot of self-care and self-discovery in the form of yoga.’

It was this time spent on herself which Lisa found invaluable to recovering, not only physically, but mentally too as she embarked on the journey to love who she is despite her perceived imperfections.

‘I find myself beautiful and I started appreciating other [features] on me,’ she said.

‘Before my accident, I really liked my smile, my lips and teeth. Now, it’s more the wrinkles around my eyes and the shining through my eyes.

‘It’s not symmetrical at all and it’s not how it used to be – but that’s how it is now and I’m fine with it. Well, most of the time.

‘I often smile to myself in the mirror and tell myself something beautiful, an affirmation like, “your eyes shine so bright” or “you are beautiful the way you are.”‘