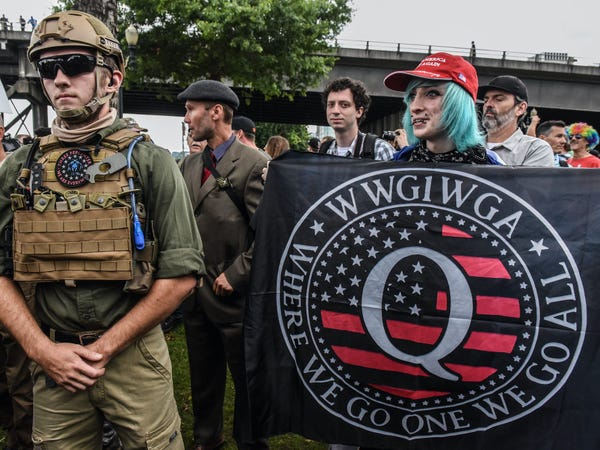 After YouTube's crackdown on QAnon and other conspiracy-theory content, the platform is being sued by 15 former creators who allege their removals were part of anti-conservative bias.

The lawsuit, filed Monday in US District Court in Northern California, seeks a temporary restraining order to reinstate the accounts of the 15 plaintiffs, some of whom had hundreds of thousands of subscribers.

YouTube, which is owned by Google, announced on October 15 that it would prohibit content promoting "conspiracy theories that have been used to justify real-world violence." While the move stopped short of a ban on QAnon — which Facebook, TikTok, and other platforms have enacted — it effectively shut all QAnon-related content off of the website, where it used to thrive as part of YouTube's infamous rabbithole video-recommendation algorithm.

Suing YouTube are some of the internet's top promoters of QAnon, the baseless far-right conspiracy theory alleging that President Donald Trump is fighting a deep-state cabal of human traffickers.

These plaintiffs, all of whom were removed from YouTube on or after the October 15 ban, include Jeff Pedersen, better known by his social-media handle "InTheMatrixxx"; Jordan Sather of the channel "Destroying the Illusion"; and Polly St. George, known as "Amazing Polly," who is believed to be a creator of the false Wayfair conspiracy theory that went viral on mainstream social media platforms over the summer.

As the Verge reported Monday, one plaintiff, listed anonymously in the lawsuit, had already been suspended from the platform in 2018. The channel "SGT Report" had spread the "Frazzledrip" conspiracy theory, the false claim that Hillary Clinton and Huma Abedin sexually abused a child and drank her blood.

The attorney representing the plaintiffs did not immediately respond to a request for comment.

Alleging a breach of contract and a violation of the First Amendment, the complaint claims that YouTube targeted conservative voices in their ban, rather than conspiracy-theory content.

"YouTube's massive de-platforming, which occurred just three weeks before the 2020 Presidential election, worked to the severe detriment of both conservative content creators and American voters who seek out their content," the lawsuit says.

The complaint claims that the removed channels of the 15 plaintiffs "address issues of public concern that are highly relevant to the November 3 election and its anticipated aftermath," and that "the public will suffer irreparable harm in the absence of an immediate and affirmative injunction."

As tech companies struggle to moderate misinformation ahead of the election, they've been met with swarms of allegations of anti-conservative bias. Donald Trump Jr. has claimed without concrete evidence that Instagram and Twitter shadow-banned his content to make him reach fewer people.

The lawsuit also alleges that YouTube violated its own terms of service by not offering "sufficient notice" and explanations of the removals.

In a statement, a YouTube spokesperson told Insider that the platform is unbiased in the moderation of its rules.

"We cannot comment on pending litigation, but our policies are updated regularly to meet new challenges, like harmful conspiracies that have been used to justify real-world violence. We have a dedicated policy team that works to review our policies and adjust them as needed. We apply our policies consistently regardless of who owns the channel," the statement said.

YouTube and other social platforms are protected by Section 230 of the Communications Decency Act, which prevents "interactive computer service" providers from being seen as the "publisher" of content uploaded by users, according to the Electronic Frontier Foundation.

Protection from Section 230 has already dismissed a similar lawsuit. When a company sued YouTube and Google in December 2019 over the removal of its channel and videos, a federal judge found that Section 230 granted YouTube the right to "good-faith removal of objectionable content," Bloomberg reported.

A Senate hearing on Section 230 is scheduled for Wednesday, as the protection has faced increased scrutiny amid allegations of social media censorship.

One Direction: Harry Styles doubted his own success without 1D