Follow
Home » Music » A man waved a sword at a woman blocks away from a polling place, warning her to ‘vote for Trump’ and photographing her license plate

A man waved a sword at a woman blocks away from a polling place, warning her to ‘vote for Trump’ and photographing her license plate 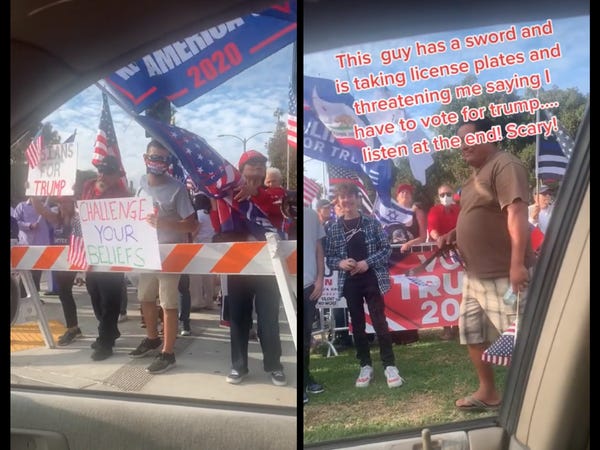 A man attending a Trump rally in Beverly Hills, California on Saturday wielded a sword, threatened a woman driving by to "vote for Trump whether you like it or not," and photographed license plates, a viral TikTok video showed.

Ajay Rochester, the woman who filmed the incident, told Insider that she was "scared and intimidated" as she drove through three blocks of pro-Trump protesters who have gathered in the location for weeks, according to reports.

In the video, which reached more than 900,000 viewers as of Wednesday afternoon, three days after its posting, a man approaches Rochester's car as she drives by people wearing Trump and QAnon conspiracy theory swag.

"We got you now," the man can be heard saying in the video. "We got your plates, we got you." The man then walks to the front of Rochester's car and appears to take a photo of her license plate. "We know who you are now. You're going to vote for Trump whether you like it or not," he said, while pointing a sword at her.

According to the Facebook event for the rally and public information, the incident occurred just two blocks away from a polling place.

Rochester, an actress from Australia, said in an email that the attendees of the rally "were all there to tell and jeer at any car that did not honk and cheer them on," but that she wasn't sure why the man, who has not been identified, targeted her and assumed she was a Biden voter.

"There was nothing on my car to indicate my affiliation at all," Rochester said. "As you can see by the video I was not responding and yet he escalated it."

Rochester, whose phone logs were reviewed by Insider, called the Beverly Hills Police Department after the encounter, but she said that the woman who answered "didn't seem to care." A representative for the Beverly Hills Police Department confirmed that an official police report was not filed. Rochester also said she notified the FBI of the incident.

Rochester wrote in her TikTok, which amassed more than 200,000 likes, that the experience felt like voter intimidation. Voter intimidation concerns have spread nationwide ahead of the election.

According to a New York Times report, the Trump campaign recently filmed people as they were dropping off their ballots in Philidelphia. On Tuesday, a far-right militia leader appeared on the show of conspiracy theorist Alex Jones warning that his group would be present at polling places.

Lindsay Schubiner, the program director at the Western States Center, a progressive nonprofit that researches far-right extremism, told the Washington Post that even political rallies near voting sites in the days of early voting can be "intimidating." And the fear of voter intimidation alone may be its own kind of voter intimidation, Five Thirty Eight reported.

Flashback: George Harrison and Bob Dylan Sing 'If Not for You' at Concert for Bangladesh Rehearsals

Why some influencers can’t stop partying during the pandemic, even after condemnation and backlash