The spirit of Afrobeat pioneer Fela Kuti was alive in Melbourne as his eldest son Femi sung, hopped and trilled to a transfixed crowd at Max Watt's at the weekend. 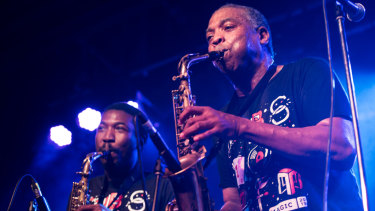 "They are doing justice to the Afrobeat," the singer-saxophonist said of the Public Opinion Afro Orchestra, the 17-piece Melbourne-based band that played alongside him.

They are why he risked his life, he joked, to fly all the way to Australia to play in the fourth rendition of Beasts of No Nation, a homage to Fela Kuti presented by the band and PBS FM's Stani Goma.

The POAO brought an undisputable energy to the stage, combining elements of Afrobeat with rap and Motown, a strong brass section, electric keyboard and percussion as well as women vocalists and dancers who beamed in African wax print and sequins.

They opened with protest song No Passport, whose lines "no borders, no segregation, more freedom" had the crowd dancing and singing along.

There were stunning displays of musicality throughout, with saxophone solos from Lachlan McLean and Ania Reynolds as well as bassists, trumpeters and percussionsists.

MC One Sixth's Fight so hard invited audience call and response, and vocalist and trumpeter Olugbade Okunade completely captured the crowd with his bass voice and commanding presence.

But when Femi came on stage there was a palpable lift. This is African royalty, and he brought his trademark vivacity, moves and fervour. For Fela Kuti favourite Zombie, Femi swapped between saxophone and the microphone.

Purists may have been taken aback by a contemporary twist to Water no get enemy, with MC One Sixth rapping throughout, but the crowd lapped it up. 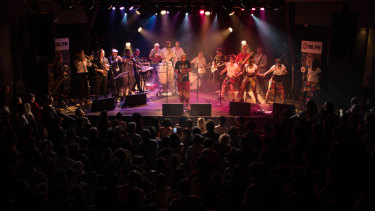 Fela Kuti's grandson Made Kuti took centre stage with his saxophone for No Agreement, before Femi's smooth vocals cut through the crowd.

The 57-year-old put everything into the performance: he jumped and romped around and as the heat rose, sweat dripped from his nose and he stripped off a layer – revealing his father's face on a T-shirt.

"We need to think positively with everything you do …  I'm the kind of person that believes your own life will be guided by joy," he said.

They performed a range of Fela Kuti hits including Lady, Beng Beng Beng and Evil People, which was a particular highlight.

After calls for an encore, they finished with Open and Close, with Femi instructing the audience to get low and open and close their legs. The crowd was moving and shaking and completely engaged. There's no doubt that Afrobeat and the spirit of Fela Kuti live on in Australia.

'Pioneer, Afrobeat, Fela, Kuti, Liv
You may also like:

The Best Songs to Listen to if You're Really, Really Anxious

Taylor Momsen Is Worth More Than You Think