When she was 19, Angie McMahon got some career advice from Jon Bon Jovi. She didn’t listen to it.

The Melbourne native had won a competition for aspiring artists, which involved opening for Bon Jovi on a run of Australian shows. “He said to me, ‘my advice to you is, use this opportunity well – don’t screw it up’,” McMahon recalls, over vegemite toast on a sunny winter morning in Melbourne. “And I said, ‘of course!’ But, even as he said it, I knew it wasn’t my time.”

“At the end of that tour,” McMahon, now 24, adds, “I was like, ‘I’m not ready for this. My songs are shit. I can’t really perform. I’m not really bringing anything to the stage other than being a timid, folkie singer-songwriter’. I knew I wasn’t good enough. I was worried, of course, that I was passing up some massive opportunity. But, sometimes you have to.” 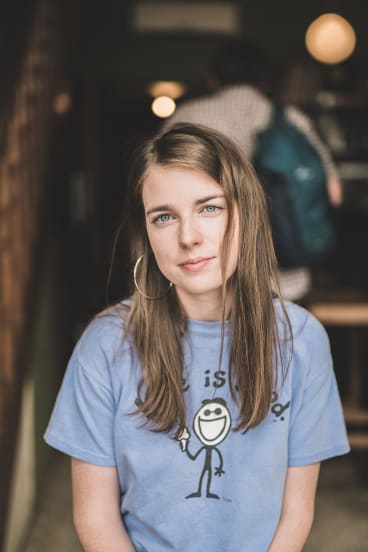 Angie McMahon is set to release her debut album.

Instead, she put her career on the backburner, finishing her arts degree at Melbourne University, and singing in soul big-band the Fabric. Occasionally, McMahon wondered if she’d made the wrong decision, given that making music was –  since she was a kid, singing along to KD Lang in her parents’ car – what she always wanted to do.

“I’ve been dreaming about doing it my whole life,” McMahon says. “Every time I was at a gig, especially with every female singer-songwriter that I’d see, I’d be picturing myself up there.”

Now, McMahon is living her dream. Her 2017 single, Slow Mover marked her "return" in a wildly successful fashion, cracking the Hottest 100 and inspiring sing-a-longs at shows.

“People really latch onto it,” McMahon says. “Even the first time I played it, during a set at [Melbourne venue] Some Velvet Morning, the reaction was so much louder than any of the other songs. Afterwards, people wanted to talk to me about the song. Now, probably once a month someone will send me a cover of them playing. It’s strange and lovely. At this point, it doesn’t even really feel like my song.”

Subsequent singles Missing Me and Keeping Time have kept that momentum up. In under a year, McMahon has gone from playing tiny bars to large theatres. “I’m scared,” she admits, of her biggest headlining gigs. “The day before we announced the shows, I was just crying, I was having a bit of a meltdown. Then you remember that it’s just a gig and the world doesn’t revolve around you and your shows.”

McMahon is also finishing her debut album, marking a watershed year for the musician. After working long and hard on the recording, she’s itching for the album to be out. “I feel like I want to shed this skin, turn it loose to the world. I’ve made my peace with it, I’m really ready to just release it. When you work on it for so long, it feels like it’s yours, but once it’s out, then the music belongs to other people.”