Less than a month before releasing her band’s debut album, Honeymoon, Beach Bunny’s Lili Trifilio tweeted something unexpected. “Love honeymoon but I cannot relate to her,” she wrote, confessing to the all-too common dissonance artists feel from the lag between recording and releasing an album. “I’m not saying I won’t ever write an emo song again,” she continued, “but 2020 is definitely the decade of diss tracks ft. criticism of humankind and anyone that thinks they can fck me over.”

Even if some part of her has already moved on, Honeymoon is a culminating moment for the bruised narratives that Trifilio has been merging with swooping power-pop/punk melodies since 2017, when she put together Beach Bunny for the express purpose of competing in a battle of the bands in her native Chicago. The album features fast-paced heartbreak songs  like “Colorblind” and “Promises,” as well as instant anthems like “Ms. California,” which sets a West Coast daydream to an endearing “Stacy’s Mom”-esque chord progression. (“I played the songs side by side, and I was like, ‘Yikes,’” Trifilio jokes about the 2003 Fountains of Wayne hit.)

Guitarist Matt Henkel describes Beach Bunny’s process matter-of-factly: “They’re pop, and then we just do whatever we want to them.” The band has mastered that style so effectively that they’ve already landed a gig at Coachella; performed with Trifilio’s heroes and foremost influence, Minnesota indie rockers Hippo Campus; and garnered at least one viral hit with 2018’s body image commentary “Prom Queen,” all before they’ve even released an album.

But Trifilio, 23, is looking towards what’s next. “The majority of Honeymoon was written in 2018 and recorded in 2019, and I feel like those two years, I was going through a lot of life changes, and also a break-up,” she says. “At the time, I didn’t really know my worth and had lower self-esteem, so a lot of the Honeymoon songs are sort of dramatic, sad ballads. Now I’m trying to write more empowering songs — maybe talking about the same things, but I have a more healthy mindset.”

The central tension in Beach Bunny’s music comes from the way that Trifilio and her bandmates — Henkel, drummer Jon Alvarado, and bassist Anthony Vaccaro — juxtapose Trifilio’s privately downcast tales with the carefree punk energy they bring to their live shows, where the band might cover anything from “Party in the USA” to the Spongebob theme song. Sometimes, Trifilio has had to speed up a song she’s written because it’s otherwise too difficult to sing. More often, though, she’s able to create healthy distance between her performances and the emotions her songs are drawing on. 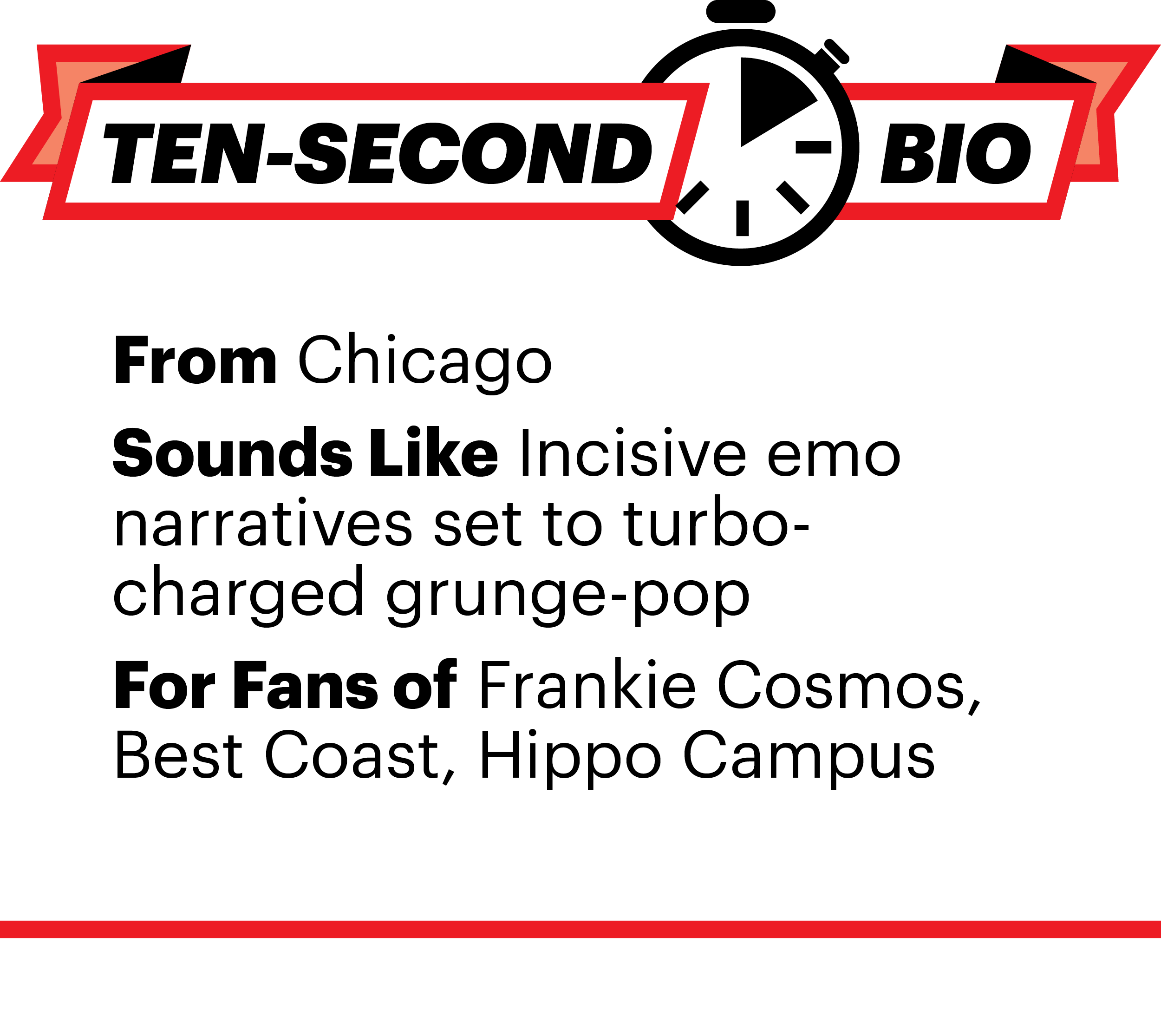 “It’s interesting, to be singing the word ‘cry’ or singing a really sad lyric, but I’m just trying to open up the mosh pit,” she says.

The first time Trifilio remembers performing in public was at a high school variety show, where she covered “E.T.” by Katy Perry. “A lot of people were really encouraging, and that’s why I continued,” she says. After collaborating with a friend in a folk duo called Fingers X Crossed in college, Trifilio began uploading her raw solo recordings to Bandcamp under the moniker Beach Bunny.

Around the same time, she met Henkel when she stumbled upon him at a house show. “I was playing a mix of classic rock and, like, emo-bullshit stuff,” says Henkel, who eventually recommended Alvarado as the drummer for the battle of the bands gig. (“We didn’t have a bassist for a while,” Henkel adds.)

Trifilio, Vacarro, and Henkel are all recent graduates of Depaul University, where the singer studied journalism, reporting on the local Chicago music scene that she herself became a part of throughout college. Giving interviews as Beach Bunny’s career took off, while simultaneously studying how to conduct those very interviews in class, has been a strange process. “Sometimes, I see how people phrase the question,” she says, “and I’d be like, ‘I would’ve done this differently.’”

Trifilio had already settled on Beach Bunny’s pastel retro-kitsch image by the time the boys joined the band. “The aesthetic and branding was already established,” she says. Online, the band offers contests to win Beach Bunny-branded roller skates, and their merch store includes Beach Bunny fanny packs and Band-Aid dispensers.

Branding aside, one of Beach Bunny’s primary appeals is the unpolished energy that Henkel, Alvarado, and Vacarro bring to Trifilio’s razor-sharp pop songwriting. That energy comes, in part, from the fact that the group is, by their own account, very much still learning as it goes. “I’m actually, like, not a bass player,” says Vaccaro. “It’s just relearning and reteaching myself everyday,” Henkel says of his own guitar playing.

For Trifilio, being part of a proper band has already noticeably affected her songwriting process. In “Prom Queen,” the group’s biggest hit, “The majority of the song is just, ‘lyric, lyric, lyric, lyric,”’ says Trifilio, “but at the end I was like, “Oh, Matt can do a super-cool guitar solo and I don’t need to be singing the last four bars.”

Trifilio has been on a writing binge in the weeks leading up to the release of Honeymoon. On Twitter, where she often offers up samples of her poetry and lyric-writing, Beach Bunny fans can watch the songwriter experiment in real time. (One recent couplet: “I’m sick of kissing frogs and I’m tired of nice guys/I want to meet somebody who wears hearts inside their eyes.”)

As Beach Bunny is poised to become one of the year’s biggest indie breakthroughs, Trifilio remains focused on growing as a writer. “I’m hoping to, in the future, branch out from the same themes,” Trifilio says brightly, “because I’ve gotten pretty comfortable in that realm.”

Artist You Need to Know, beach
You may also like:

Tom Jones love child: Who are Tom Jones’ children? Does Sir Tom have a lovechild?

Video game streaming platforms like Twitch want to look after their users' mental health, but it's only going to get harder as the industry grows

BTS on the 'Today Show:' Will They Be Returning for the Show's 'Summer Concert Series?'