Melinda Schneider was an instant fan the first time she saw Doris Day. Country singer Schneider was only eight years old when she caught the Hollywood legend in the 1953 Wild West musical Calamity Jane on television one Saturday afternoon.

"I loved her as the rootin'-tootin', whip-crackin', sharp-shootin' tomboy that she played," says the six-time Golden Guitar winner. "Even as dirty, weather-beaten Calamity Jane, she was still beautiful. Great singer, great comedian, great dancer, great actor – she had it all." 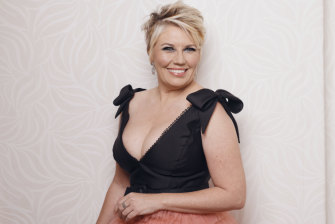 Melinda Schneider, in her custom-made Velani gown will, pays tribute to her idol Doris Day in a A Farewell to Doris. Credit:James Brickwood

It was also a song –The Black Hills of Dakota – from that film that helped Schneider learn how to do three-part harmonies, while Day's vocal versatility also helped her discover jazz and big band recordings.

As with Day's many other admirers, Schneider was deeply saddened by Day's death, at age 97, in May. "Ninety-seven is an amazing innings, but I really thought she'd make 100 because she just seemed so invincible," she says.

Schneider will soon say her own musical goodbye to the film star next month with A Farewell to Doris. The concert sees the singer backed by a 20-piece orchestra as she performs some of Day's most memorable tunes, such as Secret Love, Everybody Loves a Lover, Sentimental Journey, Pillow Talk, and, of course, Que Sera, Sera (Whatever Will Be, Will Be).

"We're really celebrating her incredible life," says Schneider. "I'm just hoping that everyone who is there sings along with me."

It's not Schneider's first time dipping into Day's discography. She has recorded two tribute albums and also starred in the theatre show Doris Day – So Much More Than the Girl Next Door in 2011, a show Day gave her seal of approval to when she was sent the script.

We both chose a few shockers when it came to men along the way.

It was while learning about Day's existence offscreen that Schneider began to find parallels between their lives. "I was very much into doing the right thing, being a good girl, people pleasing," she says. "We had a lot in common with that. We were both born to German Catholic families. We both love our doggies. We both chose a few shockers when it came to men along the way. And a lot of pain behind the smile, a lot of struggles, and I've had those, too."

So was Day more complicated than her bubbly persona and beaming smile led people to believe?

"She certainly had her demons, but she wasn't allowed to show them publicly because that was the era of the '50s," says Schneider. "So she kept a lot of sad secrets about her unhappy relationships and really didn't talk about them. And, I think, until the very end felt a pressure to always be remembered as that sunny girl next door."

For A Farewell to Doris, Schneider isn't interested in performing a pitch-perfect impersonation of Day, but instead simply wants to pay homage to her.

"There will only ever be one Doris Day," she says. "It's me singing her songs in my own voice, but very respectfully sticking to the original arrangements because they got them right the first time. We don't need to mess with them."

A Farewell to Doris is at Sydney Opera House on September 6.

Flashback: AC/DC Rip Through 'Moneytalks' at 1991 Monsters of Rock Festival

Anthony Hamilton's 'Back Together' Gets the Quiet Storm Treatment