Don't be disconcerted if Dr Lou Bennett, the Indigenous singer collaborating with Archie Roach on his upcoming national tour, tells you she talks to dead people.

She's not trying to frighten you. What she means is that talking to her ancestors is an essential part of preparing for a gig. 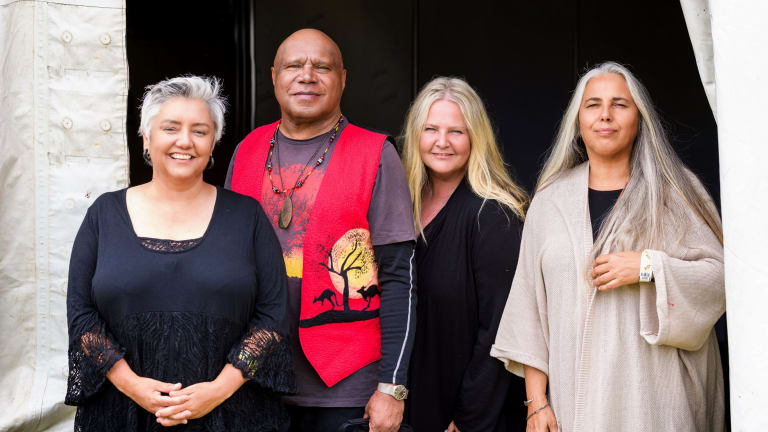 Archie Roach and Tiddas, who have got back together for a national tour.

"I speak to them before every performance, the way I'm talking to you right now," she says.

As if on cue for the spiritual subject matter, night is falling, and the ghostly face of Central Station clock tower looms above the hotel courtyard Bennett is sitting in.

"A lot of people might ask me, 'What on earth are you talking about?' if I told them that palm tree is my grandfather, or that rock is my cousin. But our ancestors are real, they're right here with us. Talking to them is our way of honouring the deep connection we have with our country, and for every living being around us."

This sense of quiet certainty that first propelled Bennett onto the stage as a teenager will remain undimmed when she re-unites with former Tiddas members Amy Saunders and Sally Dastey​ for Roach's tour.

Late last year Roach unearthed Dancing With My Spirit, first recorded 20 years ago, after he realised many of the tracks captured his voice and song writing at their best.

Roach has seen a big shift in mainstream attitudes to Indigenous music over the last few decades. It's no longer categorised separately anymore, he says; rather, it's regarded simply as great Australian music.

Certainly Bennett regards herself as fortunate to have been born into "a long line of musicians". Growing up in Echuca, northern Victoria, the small house she shared with her parents and sister thrummed with great music, from the Carpenters, Michael Jackson and Stevie Wonder to Roy Orbison, Art Garfunkel and Paul Simon. Her uncles belted out Beatles hits in their rock'n'roll band, the Shades. Her grandmother, Nanny Iris, took centre stage in a vaudeville group, and her mother and aunties broke into three part harmonies so often they were called the "Black Andrews Sisters".

"When we went out bush, my uncle Wayne always had the stereo pumpin'," she says. "It's part of our culture, how we express ourselves, how we continue the stories of our ancestors."

Her family were boilermakers, bricklayers and teachers, but Bennett broke the mould, determined to forge a career as a musician. The turning point came when she saw the American songstress Tracy Chapman in Melbourne. Bennett was 19 at the time, but she remembers the night as if it was yesterday.

It's what I was put here to do

"I went weak at the knees. I mean I was head over heels in love with this woman. I took a rose for her," she says. "I wasn't a fan, it was much bigger than that. The songs she was singing about – 'Talking about a revolution', domestic violence – were things I could totally relate to.

After that, she says, she "dreamed big".

She joined the Shades, paying keyboard, harmonica and singing, going to gig after gig at workmen's clubs and pubs. A lot of people didn't take her seriously and thought that a Koori girl from a small country town would never make it.

By 1990, she'd proved them wrong, after joining Saunders and Dastey in the folk trio Tiddas, an Aboriginal word for sisters. At the height of their 10-year partnership, they won an ARIA and played in London and New York with the likes of Billy Brag, Bjork, Savage Garden, and the Ramones.

Their songs , such as In my Kitchen, By Your Side, and Koori Woman, were about "her mob" as she puts it – about dispossession, domestic violence, and also hope and resilience as well. But their harmonies resonated with both Indigenous and non-Indigenous people around the globe. "Songs like Inany carry a spirit we can't necessarily articulate. People have sung it back to us in Spain, Switzerland, Hawaii."

After Tiddas broke up, Bennett pursued an academic career, gaining a doctorate, specialising in the retrieval of Aboriginal language.

"We repatriate Aboriginal culture in a tangible way when we gather the bones of our Elders, when we bring them back home, laying them to rest. In the same way, language is an intangible form of repatriation," she says. "It's important for Aboriginal people to be able to speak their own language – we need to gather them, placing it back into our bodies, back into the country. "

Aboriginal languages have a meaning much deeper than just words, she says. "For me, it comes up through the river, it comes through the sand hills, it's the sound of Dja Dja Warrung (one of the languages Bennet speaks)."

These days Bennett lives away from the rush of city life in a red cedar house with her partner in rural Victoria. They're on Jaara country, the land of her ancestors, and a 140-kilometre drive north to Echuca where most of her family still live. To them, she is still their Tidda girl, or little sister.

Roach says he's overjoyed to be singing with Tiddas again. "They were the original backing vocals of Dancing with My Spirit, and they add a layer of depth and energy to the music. They take it to another level."

As for Bennett, being a voice for Indigenous culture is a powerful call. "When the Tiddas come together and sing I have to hold back the tears because there's a hum in my body that moves around," Bennett says.

"When I'm performing, especially in my languages, there's the sense of absolute centredness, calmness, love. It's what I was put here to do."

Archie Roach and Tiddas play Hamer Hall, Arts Centre Melbourne, on May 6, and the Enmore Theatre, Sydney, on May 9.