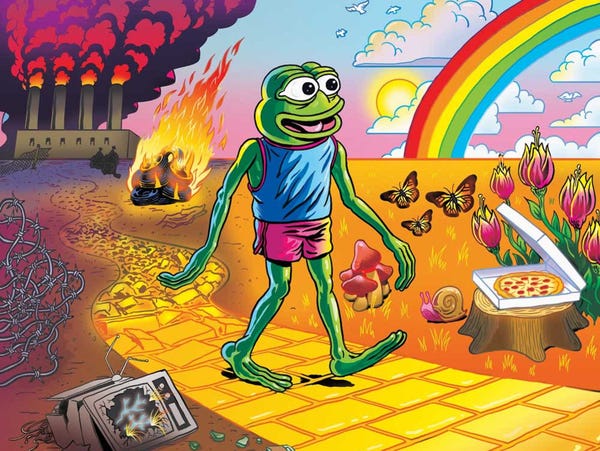 In 2020, it's become clear that memes can have a tangible impact on political discourse. Russian intelligence agencies have used divisive memes to influence American elections, according to Congressional reports, and Donald Trump Jr. has used social media and memes to build an unexpected political following. Even if some social media companies have recently cracked down on bigoted content, censoring memes is like a game of a Whac-a-mole.

Matt Furie, the cartoonist who created Pepe the Frog, has firsthand experience with the chaos of troll culture. In their new documentary, "Feels Good Man," Arthur Jones and Giorgio Angelini tell the story of how Pepe went from a stoner cartoon to an alt-right icon that's condemned by the Anti-Defamation League, and show Furie's Herculean effort to reclaim his creation.

Jones, a cartoonist, first encountered Pepe the Frog in the mid-to-late 2000s, back when he was merely an anthropomorphic amphibian whose most egregious offense was goofy bathroom humor. He bought Furie's comic book Boy's Club and became a fan of his irreverent style, later befriending him on a hike with mutual friends. Over time, Pepe became an internet sensation and was a calling card of certain meme-heavy spaces on the internet. Celebrities even referenced Pepe, including Katy Perry in 2014.

In 2015, Jones was shocked to learn that Pepe had transformed and come to signify something totally different: within a couple of weeks, it was reported that an Oregon high school shooter had included an image of Pepe in an ominous post on the fringe message board 4chan, and Trump retweeted a meme of Pepe sporting his iconic, slicked back blonde hairdo.  He recalled his bewilderment on a Zoom call with Insider,"I felt like the zeitgeist was on fire. I was just like, 'what the f-ck is going on? And what does this have to do with my friend's cartoon character?'"

In fall 2016, shortly after Hillary Clinton's campaign denounced the cartoon as a hate symbol, Furie teamed up with the ADL for a social media campaign called #SavePepe. Jones was one of the cartoonists who Furie asked to draw a more optimistic version of Pepe as a way of forming a counternarrative to the Neo-Nazi imagery stewing on 4chan and Reddit. "Feels Good Man" traces how this seemingly silly character transformed into an internet meme, and then an international symbol for ethno-nationalist hatred.

Hey Everybody! We're passing on a fantastic message to you from the wonderful #mattfurie "Dear friends, I need your help making positive pepe the frog memes to battle against evil trolls: Please make a kid-friendly Pepe in your style and send it to me at: [email protected] I’m creating a positive pepe artist database, so include your name. Also, please share nice Pepe’s with the hashtag: #savepepe thanks! -matt."

Furie posted his Boy's Club comics on Myspace and then soon after, "Feels good man," Pepe's nonchalant catchphrase, began appearing on bodybuilding message boards. From there, the cartoon gradually evolved into a meme, spreading to YouTube and unregulated corners of the internet that have fostered bigotry and trolls. Pepe was quickly co-opted for political purposes, and overtime became synonymous with the far-right politics of many internet trolls. By the time the ADL added it to their hate symbol database and the Clinton campaign published their Pepe explainer, the cat was out of the bag. During the 2016 presidential race, the Trump camp frequently used Pepe as a nod to the conservative memosphere, such as when Donald Trump Junior posted a Trumpified version of Pepe alongside Roger Stone, Milo Yiannopoulos, and other mainstream and fringe conservative figures.

Jones initially conceived of making a documentary about Furie in early 2017, during the aftermath of the 2016 election, and began production later that year. The film details how with legal help, Furie gained control of the narrative through stopping the sale of a racist children's book and successfully suing Infowars' Alex Jones, a right wing conspiracy theorist, for selling a t-shirt that featured Pepe.

In their film, Jones and Angelini unpack what drives people to online radicalization.

"Feels Good Man" explores what drives the fringe online communities that radicalized Pepe. The filmmakers navigated the subject with nuance, striking a careful balance of not endorsing the trollish posts' hateful messages while also acknowledging the potential power of online camaraderie.

"We wanted to interrogate the systems behind radicalization and the kind of polarization that's happening online and the systems behind what keeps kids in the basement rather than actually giving a platform to hateful people because ultimately, those messages are not actually what anyone needs to hear. But what we need to understand is really what's what's behind all that garbage," Angelini told Insider.

The documentary offers a holistic perspective on how Pepe the Frog became a 4chan phenomenon, featuring an interview with Mills, a prominent poster and meme maker, who describes the experience of interacting with other users on forums as "group therapy," even if the political context of that therapy is abhorrent to many. The dynamic of 4chan as an underground space encouraged users to post racist and antisemitic content. By taking Pepe to deplorable extremes, posters tried to repel "normies" from their world and content.

"Pepe is so popular on that platform because people are anonymous and their faces aren't on there so they use Pepe as a way to communicate their emotion. This story was going to really be about how emotion is leveraged online to build coalitions between people who live very far away, but have a shared grievance," Jones said. He wants viewers to leave with a better grasp of the "emotional core" of 4chan.

"We want to make a film that Mills could look back on and have some self-reflection. [We didn't want to] make a preachy kind of film about behaviors online, but really speak honestly and with nuance about these problems," Angelini added.

Though Furie is depicted as feeling tormented with what his creation had become, the film ends on a semi-optimistic note. In 2019, Pepe became a symbol in the Hong Kong protests, highlighting that a meme can be revitalized in a radically different context.

The filmmakers say that Pepe the Frog is an example of the tangible potential of memes.

Jones believes that the themes of "Feels Good Man" go beyond Pepe, citing how in the 2020 Democratic Party primaries, former New York City mayor Michael Bloomberg invested in a meme campaign and political newcomer Andrew Yang made it onto the debate stage largely due to his online fandom. Recently, it was reported that Kyle Rittenhouse, the 17 year old suspected of fatally shooting two people at an anti-police brutality protest in Kenosha, Wisconsin, had a social media presence filled with Blue Lives Matter-related content. "Feels Good Man" illustrates how the line between online and reality isn't as sharp as some would like to believe.

"As your real self becomes permanently enmeshed with your online self, those feelings become very visceral and very real and they spill over into real life and in really dangerous ways. That's really a conversation that I hope this film really starts to interrogate in a meaningful way," Angelini told Insider.

While the documentary doesn't instill a heavy handed sense of technophobia, it does offer a granular window into the way irreverent online actions can potentially take an emotional toll on a total stranger. Jones views Furie as an "analog figure in a digital world" who unknowingly got pulled into a cyber nightmare and hopes that viewers come away with an understanding that what they do on the internet can "have some sort of connection to reality."

Meme experts told Insider that the Pepe the Frog story shows that censoring memes is a difficult task.

Towards the end of the film, Furie meets with a team of iDrama Lab researchers who present him with data indicating how widespread and uncontrollable his cartoon had become. Jeremy Blackburn, a computer scientist, concludes that the prospect of successfully reclaiming Pepe would be difficult, telling the artist that it was a "tough genie to put back in the bottle."

Insider reached out to experts in the field of alt-right memes who echoed this skepticism. Brendan Karet, a researcher for Media Matters for America, said that social media companies can only do so much to stop the proliferation of hate speech memes.  "Even if you attempt to preemptively ban memes, extremists on the internet will find other ways to adopt or create a symbol to identify with. The best you can do is identify prominent accounts promoting racism or violence, see what memes, slogans or hashtags they're using to promote a bigoted ideology, and document their currently preferred methods of disseminating hate speech," he wrote in an email.

Dr. Heather Suzanne Woods, a researcher of digital rhetoric who co-authored the book Make America Meme Again: The Rhetoric of the alt-right, told Insider that a crucial part to preventing the spread of hateful memes is "media literacy" education. "All citizens need to be able to spot disinformation campaigns and understand that propaganda can look like silly, irreverent memes. We need greater communication competencies from all parties — for instance, fact checking is important but insufficient. We need to look deeper into the political, social, and economic divides that make disinformation seem reasonable," she wrote to Insider.

The filmmakers and Furie hope that eventually, Pepe the Frog will no longer be classified as a hate symbol.

Jones says that Furie is "excited about the film but in a very reserved way." The filmmakers believe that the documentary can be a significant step towards the artist's goal of getting his once whimsical, quirky cartoon removed from the ADL's database of hate symbols. "We do hope that at a certain moment in time, people will have enough awareness to really understand Matt's true intentions for the character," Jones said.

The film won an award at the 2020 Sundance Film Festival and was named a Festival Favorite at the 2020 SXSW Film Festival. It will be available for digital renting on AppleTV, Vimeo, and FandangoNOW, and in select theaters September 4th.

Lil Baby Drops 'Errbody,' 'On Me' to Mark His 26th Birthday

Harry Styles Reflects on His Solo Debut: I Was Scared to Get It Wrong