Follow
Home » Music » Halsey review: She has got the voice – let's hear it

Halsey review: She has got the voice – let's hear it

What sets 23-year-old US singer Halsey apart from the crowded post-Lorde electro-pop pack, is her distinct voice: both husky and tender. It's a powerful instrument that effortlessly conveys strength and softness in equal measure. 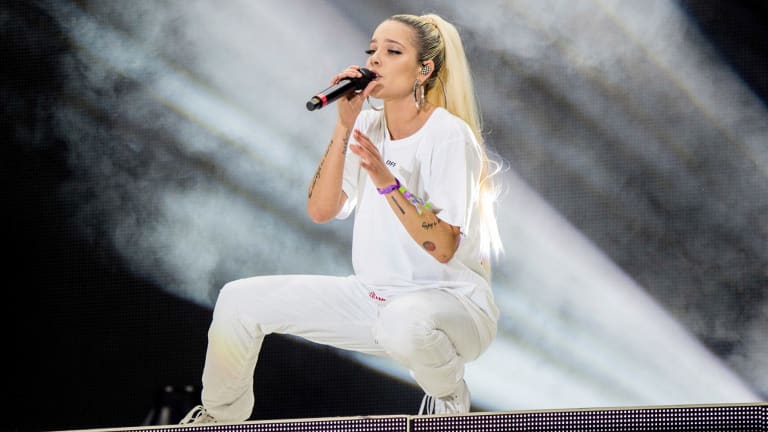 Halsey, performing earlier this year in Florida, appeared to phone-in her Sydney performance.

It's a shame, then, that at this packed show it's difficult to distinguish when she's actually using it: the blaring backing tracks are thick with her multi-layered vocals, and tellingly there are several times when the movements of her mouth and the audio don't sync.

It's symptomatic of a performance in which the artist – born Ashley Frangipane – seems only part-invested. She's content mostly to prowl the stage rather than engage in any kinetic Beyonce-level choreography (not that she should be expected to, but it would at least excuse the miming), and the lone dancer clad in what looks like a plastic raincoat serves only to add an air of budgetary constraint – not likely the intended effect.

Still, the devoted crowd of largely twenty-something women go wild for radio hits Bad at Love, Alone and Not Afraid Anymore, the latter bringing in some theatricality as Halsey and her dancer splash and stomp around in water (perhaps that explains the raincoat).

The front-row dousing comes off as a play for some wild unpredictability, but the rush of mop-wielding stagehands quickly removes any impression of edgy danger – surely they could simply have dimmed the lights?

It's only on quieter piano-led ballads such as Sorry, where Halsey uses her stunning voice at full tilt, that she forges a connection with the audience that is sadly lacking elsewhere during the show.

The sense of a phoned-in performance returns with an encore in which Halsey, at one point, leaves the stage while one of her pre-recorded songs plays in full.

The deployment of confetti cannons for energetic final track Gasoline concludes the night with a literal bang, but as soon as the lights go up there's a sense of deflation for everyone but the hardcore fans.

Halsey may have earned the love of the latter with her unmistakable voice, but she will have to do more than coast to deserve the adulation of the unconverted.