Katy Perry may have just hinted she's back with Orlando Bloom

In news that will delight Katycats, whatever Orlando Bloom fans call themselves and paparazzi hoping for the money shot, it seems that Katy Perry and Orlando might just be back together.

And you know what that means? More naked paddleboard pics. (Maybe.)

Katy came over all coy when speaking to Entertainment Tonight during American Idol‘s first live elimination show, teasing that she is “spoken for”.

K-Pez, who’s a judge on the show, dismissed the idea of dating a contestant by saying: “No, I’m sorry I have been spoken for and speak for myself – and I’m very happy!”

My ❤ has been on a roller coaster tonight ? Congratulations to the Top ? America, if you truly are a fan of one of these singers, you must vote #americanidol

My ❤ has been on a roller coaster tonight 😭 Congratulations to the Top 🔟 America, if you truly are a fan of one of these singers, you must vote #americanidol

Hinting that she and Orlando might be giving their romance another chance, Katy responded to a question about the actor with a knowing wink.

When asked if she was “a Mrs Broom” – referring to a punny photo Katy shared on Instagram of Bloom – the singer said no before winking at the camera. 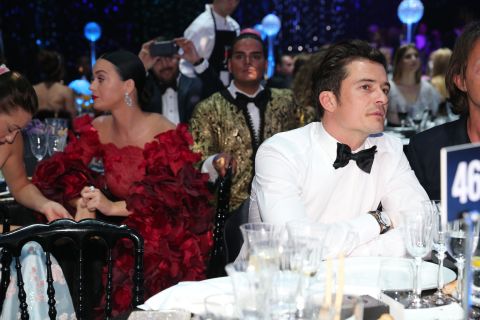 Katy and Orlando confirmed that they had split after one year of dating in March last year, saying in a statement that they were ‘taking space’ from each other.

“Before rumours or falsifications get out of hand, we can confirm that Orlando and Katy are taking respectful, loving space at this time,” the couple said in a statement.

Hey, at least all that controversial contestant kissing will probably stop now.