It was 35 years ago this week that the most iconic benefit concert in modern history took place. Organised by Bob Geldof and Midge Ure, Live Aid was held jointly at Wembley Stadium in London and JFK Stadium in Philadelphia to raise money for relief of the Ethiopian famine. Stars from Elton John to David Bowie performed, as did Queen and Paul McCartney.

And now to mark Live Aid 35, The Beatles star has shared an amazing moment he had with Freddie Mercury.

In the shot, Freddie is dressed in a red vest as he is seen sharing a microphone with the former member of the Fab Four.

This photograph was taken during the Band Aid rendition of Do They Know It’s Christmas?, right at the end of the UK Live Aid concert. 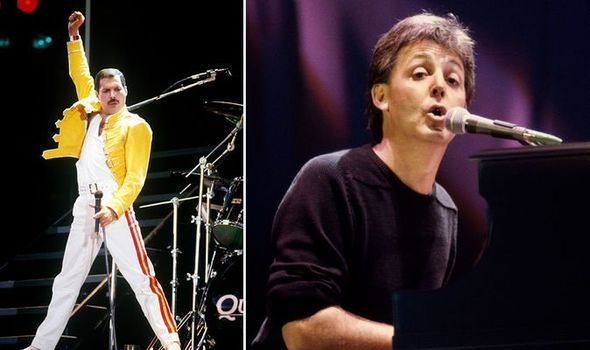 Queen are widely considered to have stolen the show at Live Aid.

Freddie Mercury’s band played a live set of six of their hits.

They were, in order: Bohemian Rhapsody, Radio Ga Ga, Hammer to Fall, Crazy Little Thing Called Love, We Will Rock You and We Are The Champions.

They were followed by David Bowie, The Who and Elton John, before Freddie and Brian May came back on for a rendition of Is This the World We Created…? 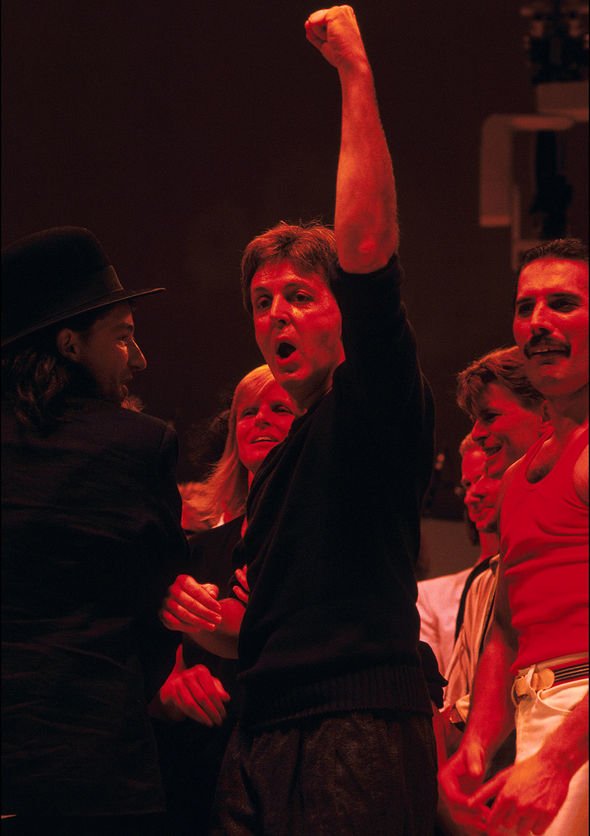 Brian May told The Observer: “I remember a huge rush of adrenaline as I went on stage and a massive roar from the crowd and then all of us just pitching in.

“Looking back, I think we were all a bit over-excited, and I remember coming off and thinking it was very scrappy.

“But there was a lot of very good energy too. Freddie was our secret weapon.

“He was able to reach out to everybody in that stadium effortlessly, and I think it was really his night.”

Rami Malek played the singer, while Brian May himself watched on as they shot the scene.

Last year, the 72-year-old shared a hidden moment in one of the many photographs of Freddie Mercury taken that day.

May wrote on his Instagram account: “Just one more LIVE AID memory before bed. Here’s Freddie and Deacy on that stage exactly 34 years ago today.”

May added: “Did anyone notice that Freddie’s hand covers the exact spot on the backdrop where he was born ? Zanzibar ! Bri.”

Fans can see in the picture shared by the guitarist, that indeed Freddie’s microphone is covering the region of Tanzania where he was born.

In fact, May visited Zanzibar last year as a pilgrimage to Freddie’s memory.

The guitarist even went to see the hospital where Farrokh Bulsara was born to Jer and Bomi, saying: “It as a thrill for me to find it.”