Follow
Home » Music » Missy Higgins: 'I feel I've had enough success, it's OK if I have a failure'

Missy Higgins: 'I feel I've had enough success, it's OK if I have a failure'

It's thought that in business, six positive comments are needed for every negative to achieve optimum team performance. In relationships, the magic "Gottman ratio" is five to one.

In music criticism, these figures do not apply. "You don't really take on the positive voices at all," says Missy Higgins. The Melbourne singer-songwriter is catching a break at a health-food joint on St Kilda Road, where we finally catch up as her manic schedule morphs and mutates. Ahead of the release of her fifth album, Solastalgia, we're discussing the sort of spectres that haunt the writing process. 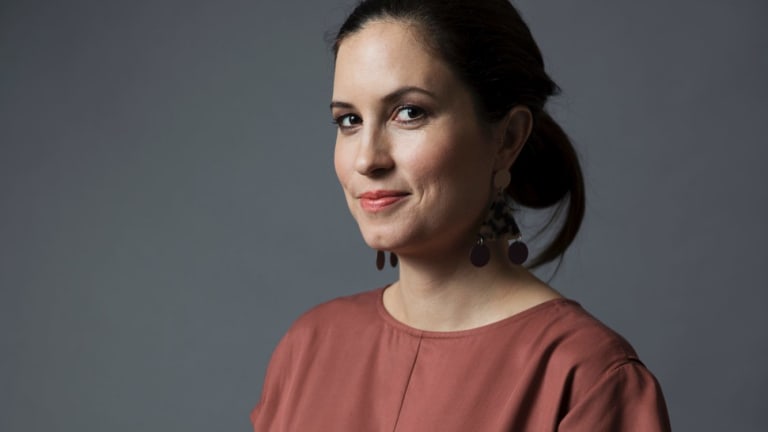 Singer Missy Higgins has a new album comming oout in May and a baby girl on the way.

"I've had some bad reviews in my time, so I'm constantly trying to not think about those reviewers," she says. "It's weird how you take on board these voices and make them your own. I also had this arsehole ex-boyfriend who was really nasty about my songwriting. When my first clip, Scar, was played on Rage he told me what an embarrassment I was. I still hear his voice in my head, although less and less as the years go by."

It's a surprising revelation, since the 34-year-old seems to always have had the knack of walking between the raindrops. Higgins has never particularly been in, nor out of, fashion, yet she's won nine ARIA awards since emerging with The Sound of White in 2004. In the weeks leading up to the release of Solastalgia, she's played to crowds of up to 85,000 supporting Ed Sheeran (who developed a lasting crush on her in the same era that her ex-boyfriend was less of a fan), performed at the AFL Women's Grand Final, and appeared on Q&A. In short, she's both adaptable and perennially likable. 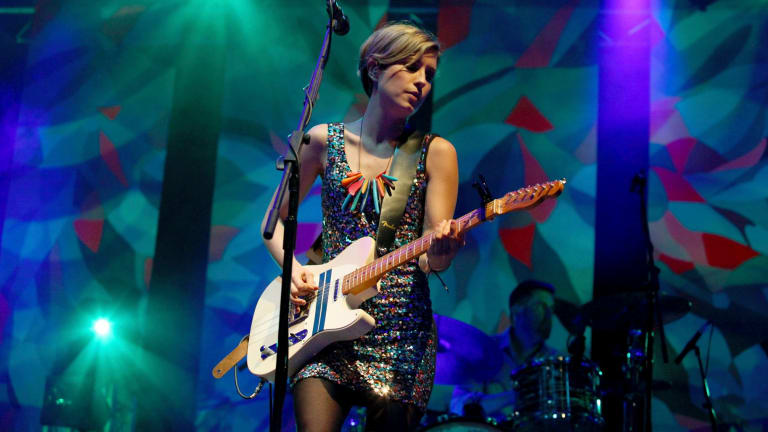 Her self-doubt, however, dates way back. Melissa Higgins grew up in the affluent Melbourne suburb of Armadale, the youngest child of a GP father and a mother who worked in childcare. Right from the start, music was a form of escapism from anxiety. In the anthology Bully for Them, edited by Fiona Scott-Norman, Higgins describes being a shy tomboy who moved from school to school in an effort to fit in, eventually being hospitalised for stress during year 11. "Composing gave me this flooding sensation and I knew immediately it was a way to let things go," she wrote, noting that it was also a way to be understood. "I could express myself in a way that I couldn't through conversation, the way that normal people did."

So perhaps it is unsurprising that her lyrics have a tendency to mine for darkness; and never so much as with Solastalgia. Her new album eschews her earthy style for poppy electronica (being made with beatmaker and producer Pip Norman, who has worked on albums by Troye Sivan​ and TZU), but thematically, it's a timeline to the end of the world.

The term "solastalgia" was coined by Professor Glenn Albrecht and is used to describe the distress of environmental change. With Higgins' album, it signifies beginnings and endings. The most cheerful example would be first single Futon Couch, about meeting her playwright husband Dan Lee. Opener Starting Again is positively nihilistic. Yesterday Must Die begins with an account of death. Red Moon is a post-apocalyptic romance. The second single is titled Cemetery.

"My songs used to be a lot more about tumultuous relationships," Higgins says. "Now that my life has steadied out, with a kid and a really good relationship, maybe my mind needs conflict from somewhere else." 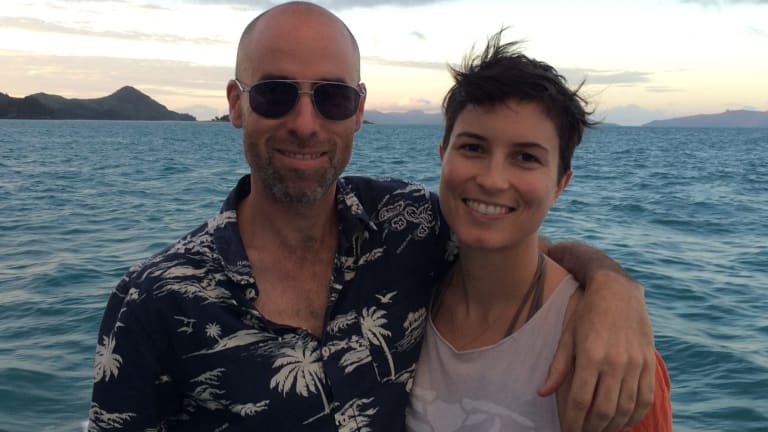 If you haven't heard of "cli-fi", it's a genre of dystopian fiction dedicated to environmental disaster; the successor of nuclear disaster and influenza novels. The heavyweight trilogies are Margaret Atwood's MaddAddam; NK Jemisin's The Broken Earth series and Jeff VanderMeer's​ Area X. Higgins, a long-term eco-activist, admits to a macabre fascination with it. "In a way, it's dealing with your fears head on by immersing yourself in them," she says. "But it's also a form of escapism, because you're giving up on the present, on hope."

Those fears were sharpened by bringing a child into the world; an ethical issue Higgins discussed at length with Lee. He had already made his mind up he would not have kids before the pair met in Broome – the remote Western Australian town Higgins would often retreat to, ever since filming the musical movie Bran Nue Dae there in 2010. In 2015, their first son, Samuel, was born. 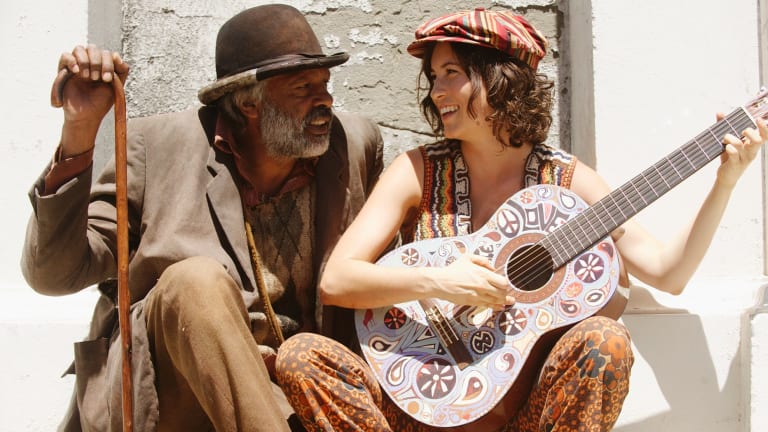 "For me, it wasn't really an option considering having a kid or not because it was such an instinctive, primal thing," Higgins says. "So my own panic set in when I was pregnant. I was becoming hyperaware of the end of my life, the end of the world, and what that meant for Sammy."

Higgins hadn't anticipated going to such a dark place. "I expected to be in a state of dumb bliss and I was worried I would lose my edge as a songwriter," she says, laughing. "Looking back, I guess I'm not surprised because it's what I tend to do. I have pretty pessimistic days where I can't get out of it before I process it through writing." 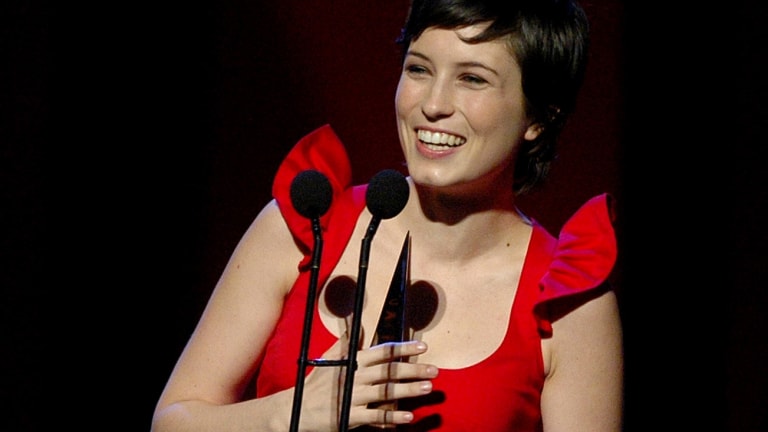 Missy Higgins accepting the award for best pop album at the 2005 Aria Awards in Sydney.

It's hardly the first time she'd considered her mortality; in fact, she says, it's at the core of all her songs.

"If you're prone to existentiality you're always going to be thinking about the possible end, because that raises the stakes for everything. But ultimately, after having my child, I felt this incredible sense of having a clean slate, a chance to see the world again through new eyes."

The family now lives in bayside Melbourne, and will soon be joined by a daughter. Higgins didn't expect to be pregnant again, but rather than slingshot her out of the orbit of the music industry, starting a family has been another thing much of her fanbase can relate to. Being a touring mum also, oddly, offers the opportunity to recharge the batteries. On the recent Sheeran circuit, Lee stayed home with Samuel so the toddler could continue his routine of going to kinder. "For me, it's this luxurious couple of weeks in hotel rooms," says Higgins. "I get to nap during the day, play music at night and order room service."

Higgins is now acutely aware of when to step off the treadmill and when to harness new inspiration. In 2009, exhausted by a US tour and the bid to crack that market, she quit music to take up indigenous studies at the University of Melbourne and travel to India and South America. This was unthinkable timing, especially when you consider that of her many songs that made it onto major soundtracks, one – Where I Stood – was doing the rounds on no fewer than three hit series: Smallville, One Tree Hill and Grey's Anatomy. Still, she says, she feared that her music wasn't affecting people in a positive way.

"I was generally disillusioned and wanted to find something that had a greater meaning," she says. "But I couldn't find anything to do that I loved."

It took a rare appearance at all-female touring festival Lilith Fair in the US (a project of Higgins' long-term idol Canadian singer-songwriter Sarah McLachlan) to inspire her comeback. She laughs almost apologetically as she recounts why. "These fans came up to me and they were talking about how much of a hole it had left in their lives by me leaving the music industry. And they were crying, telling me how certain albums had been a friend to them at a really hard time. It made me realise that what I do isn't just about me. It's about all the other people who have taken my music and made it part of their own story."

The hiatus meant there was a five-year gap between Higgins' second release, On a Clear Night, and the third, but the album she returned with, The Ol' Razzle Dazzle, went to No.1 in 2012. That was followed in 2014 by an intricately presented album of Australian cover versions, OZ.

Higgins' string of three No.1 albums as an Australian female artist now ties her with Delta Goodrem​, Olivia Newton-John and Kylie Minogue, and not many singer-songwriters can brag a debut album that went nine times platinum. At this, she cringes. "I always try to block out that information because I don't want to be disappointed in future. It's like, 'Don't tell me if I did well or not!'"

Thankfully, Higgins is now under far less pressure than the 25-year-old who gave it all up. "I feel that I've had enough success, that it's OK if I have a failure now," she says. "You almost expect that, because at this point in your career you've got to try something a bit far out to keep it interesting."

If there's anything a cli-fi fan excels at, it's having the perspective to understand what is and isn't the end of the world.

"I was inspired to get on board because I've experienced sexual harassment, like most women," she says. "I know a lot of women that have really struggled with it in the music industry, and I wanted to support them any way I could."

Higgins' interest in music took shape in the '90s, an era in which female singer-songwriters such as Fiona Apple, Jewel, Liz Phair​, Kathleen Hanna, Tori Amos and Amy Grant were tackling topics of rape and sexual abuse. As a 12-year-old, Higgins was dressing in ripped stockings and satin slips in homage to Courtney Love, whose very existence seemed to be defiance.

"Just the way she was saying f— you to the world was kind of liberating," Higgins says. "I remember lying on my bed reading the lyrics on the inner sleeve of these albums. Even if you can't directly relate to the lyrics, it eases your transition through those times and helps you survive."

Fast forward to the present current day, and 2017-2018 may prove to be another wave of action, both in terms of combating sexual harassment and gender imbalance in the music industry. The hashtag #GrammysSoMale did the rounds when only 17 out of 86 awards went to women or acts fronted by women last year, and in February, female executives in the music industry called for the resignation of the Recording Academy president/CEO Neil Portnow​.

In Australia, of the 75 artists inducted into the ARIA Hall of Fame since its beginning in 1988, only 11 are female solo artists or acts with at least one woman, and the ARIA's board of directors is all-male.

For her part, Higgins is committed to increasing the number of women in her touring party, although it's a gradual process. "I love touring with women, but it's not the norm – it's not what I've spent the majority of my career doing, and there seems to be more male session musicians out there than female. That is slowly changing. My lighting and stage designer is a woman and my tour manager is a woman. It shifts things to a gentler, empathetic energy."

Solastalgia is out now. Missy Higgins plays the Enmore Theatre, Sydney, on May 7-8; and the Palais Theatre, Melbourne, May 13-14. For more tour dates go to missyhiggins.com