Imagine if Peter Parker had never become Spider-Man. Instead, he kept getting bullied, yet still had the compulsion to dress in spandex. And he started a band.

He would probably sound a lot like Ninja Sex Party.

The comedy songwriting pair of Daniel Avidan and Brian Wecht have created the quintessential Internet Band. Their music, first published on YouTube, is heavily inspired by 1980s pop and metal, as if Belinda Carlisle was the lead singer of Van Halen. 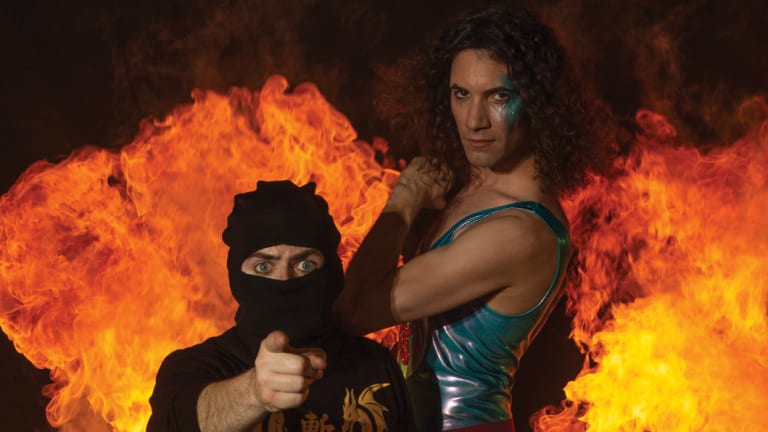 You'd be correct in guessing the lyrics are raunchy, but they're also ridiculous and earnest. Their advice for combating bullies? "You put your hands in the air and then stick out your rear end / And then you wiggle it real hard and you hug your closest friend."

The band has been going for almost a decade, which is a millennium in internet years. Their YouTube channel has reached 1.2 million subscribers, and millions more have streamed their songs on Spotify.

Wecht, 43, is a retired theoretical physicist who has years of live music and comedy performances under his belt. Becoming internet famous means millions of people are familiar with his persona, Ninja Brian. But about 20 seconds into his Conan performance, Wecht's hands trembled over his keyboard. He can't remember the last time he visibly quaked from being nervous. "It's the first thing we've ever done that doesn't feel niche," he said, of the performance. 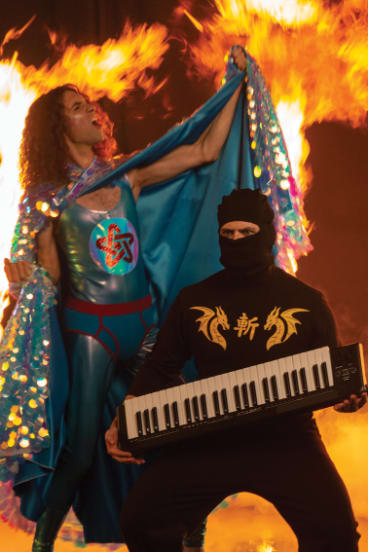 The YouTube band is big with the 18 to 24-year-old set.
Credit:Fernando Escovar

For the first time in years, Avidan said, they didn't know who was watching them.

"When the camera's on, you have no idea who that's going out to and who might be watching," said Avidan, 39, whose stage persona is Danny Sexbang and also performs as the other half of the YouTube comedy duo, Game Grumps.

Avidan has always wanted to be a rock star. His first years out of high school were spent in small bands aping Brit rock bands like Radiohead. Wecht was introduced to Avidan over email through mutual friends in the New York improv comedy circuit.

"He came to me and was like, 'Here's the idea, it's called Ninja Sex Party. I think you'd be a ninja, and that's all I got so far,'" Wecht said. "You didn't have Danny Sexbang the name originally, right? It was Sweet Nuts, right?"

"No, I did have Sexbang. Danny Sweet Nuts was the name of my 'Guitar Hero' character. Before we met, I thought, 'That needs to be more explosive,'" Avidan said.

Their first video in 2009 was I Just Want To (Dance),  which was a Queen-like ballad rocker about a ninja-cum-dancer.

Their first big "break" came via their friend Donald Glover, whom they met while they all worked and studied at the Upright Citizens Brigade, the famed improv and sketch comedy group. On his blog, Glover featured Ninja Sex Party's second video, The Decision, after Avidan helped Glover's father get into a UCB show.

In 2013, the band had 40,000 YouTube subscribers. Then YouTube gaming personality Arin "Egoraptor" Hanson invited Avidan to be his co-host on Game Grumps, which at the time had 250,000 subscribers.

Avidan's response? "How could anyone be that famous?"

Avidan's glad this viral fame has come during his thirties when he feels more in control of his emotions. Age has given him a distance from the anxieties of having to produce and perform for people online every day.

The band no longer relies on YouTube as their primary source of revenue and attention. Spotify is about to become their most profitable digital partner, giving them a solid and diverse revenue set that isn't beholden to algorithms – including album sales, merchandise and touring. Most of their audience is 18 to 24 years old, a generation unfamiliar with the concept of buying music.

The band do much of the work themselves. Their manager, JP Hasson – who works with several YouTube personalities like Jacksepticeye doubles as a stagehand, a publicist, and even their villainous laser dinosaur character, who appears on stage and is defeated only by the "positive energy" of the crowd.

"They go the extra mile for us," Avidan said of their fans, who typically line up for shows eight hours in advance. "Who knows how long this lasts? It feels like it's been trending upward. But if it ever goes sideways, it won't be because we didn't care enough."

Third Eye Blind to Perform at the Roxy in L.A.