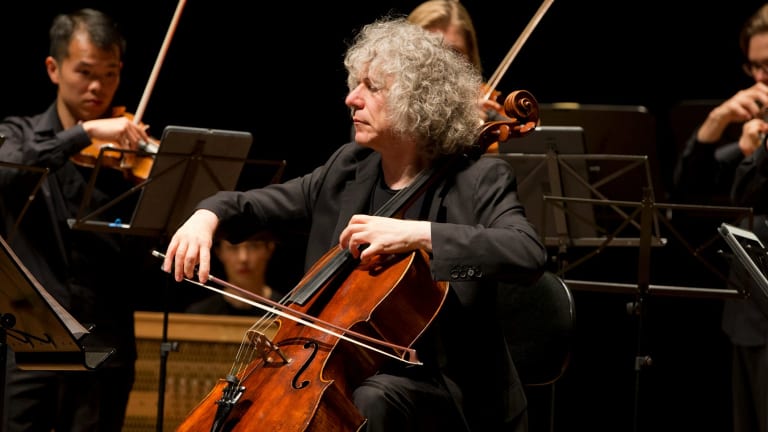 The Australian String Quartet returned to town with a typically thoughtful musical mixture of old truths and new possibilities in a program that framed a wild recent piece, String Quartet No. 3 – the Hunting Quartet by German composer Jorg Widmann, with Beethoven's last and first quartets.

Widmann's piece is in the spirit of a scherzo and can be played either alone or as the third "movement" of a "multi-work" comprising his first five quartets.

Taking the 17th century Grossvater Tanz (grandfather's dance) that Robert Schumann also quoted in his piano works Papillons and Carnival, it is an increasingly dark work with shouts and frenetic instrumental textures that descend to a sinister close in which the cellist appears to expire from musical flaying.

In Beethoven's final String Quartet in F, Opus 135, the ASQ tapered the phrases of the first and final movements in an elegant Haydn-esque manner, and reached a point of sublime serenity in the third.

Beethoven's Opus 13, No. 3, (though No. 1 in order of composition), established a genial discourse through light sound.

The Australian Chamber Orchestra began its Saturday concert under leader Richard Tognetti with the world premiere of Movements (for us and them) by American Samuel Adams, a mutating series of carefully wrought textures, in which cross-rhythms create the juxtaposition of ideas in independent tempos to create evolving trance-like energy and radiance.

One could make the same statement more concisely, but the work sustains its length with a deeply instinctive evolution of thought.

Though Shostakovich's Cello Concert No. 1, Opus 107 has much of the terrifying machine about it, cellist Steven Isserlis avoided a hammered or bludgeoning approach, creating tension at the opening in taut insistent rhythms and imaginative exploration of sound.

In the slow movement Isserlis evoked a suspended mental state of dreamy distraction before a cadenza of deepening engagement and a finale of sufficiently frightening assault that his G string gave out entirely, necessitating a pause (which Tognetti filled in with dad jokes) and restart.

The first movement, Childhood, of Elena Kats-Chernin's A Knock One Night, (another world premiere), mixed atmospheric harmonies and folk melodies reminiscent at times of the bright naivety of Janacek.

The second movement Knock evoked a knock and midnight arrest in highly literal fashion. The work told a refugee's journey in narrative form though the last two movements could also have tolerated more musical elaboration as well.

The program ended with a glorious reading of Haydn's London Symphony No. 104 in D major, played with all the stylish imagination Tognetti and the players could lavish upon it.