The Complete Coachella 2020 Lineup Is Here

The Coachella 2020 lineup has officially been announced. This year, Frank Ocean, Travis Scott, and Rage Against the Machine lead the dozens of performers hitting the stage in Indio, California during the two-weekend festival running from April 10-12 and April 17-19. The news doesn’t come as that much of a surprise, however, as rumors of the 2020 headliners leaked last month through a report from Us Weekly.

This will mark Ocean’s big return to the Coachella stage; his last time performing at the festival was eight years ago, in 2012, during his Channel Orange era. There’s also some significance to Scott’s upcoming appearance: Coachella is where he and Kylie Jenner first sparked dating rumors in 2017.

Unfortunately, this year’s lineup doesn’t include any women in its list of top three headliners. In the last three years, major female pop stars have filled Coachella’s top billing, with Lady Gaga in 2017, Beyoncé in 2018, and Ariana Grand in 2019. Gaga was the first woman to headline Coachella solo in 10 years, following Bjork. There are still many women in the full 2020 lineup, including Lana Del Rey, Charli XCX, FKA Twigs, Megan Thee Stallion, Summer Walker, Marina, Ari Lennox, and more.

The first weekend of the festival is already sold out, but pre-sale tickets for the second weekend are still available. Register on the Coachella website to get access when pre-sale tickets go live on Monday, Jan 6th at 12pm PST. Register 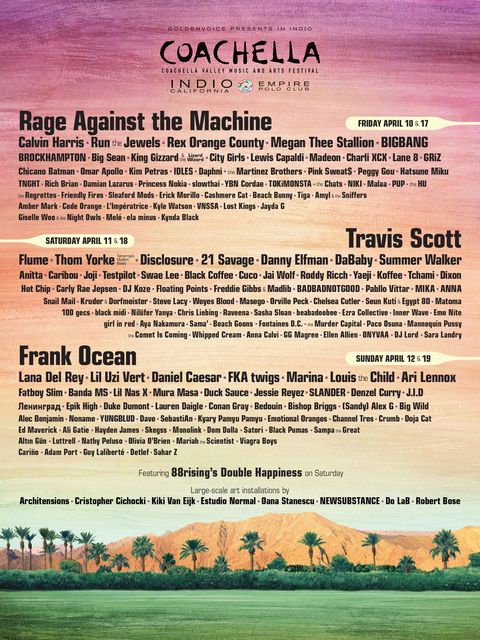 See the full Coachella 2020 lineup below: