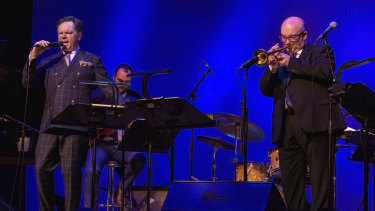 Last week, James Morrison and Kurt Elling were on stage at Hamer Hall as part of an epic All-Star Global Concert to celebrate International Jazz Day. Morrison co-directed the concert and helped co-ordinate the nationwide program of events that surrounded it.

So you’d forgive him for being a little weary as he began an Australian tour with Elling on Monday night – again at Hamer Hall – but weariness doesn’t seem to feature in his DNA.

Nor do jet lag or incessant travel seem to dampen Elling’s charisma. After a convivial opening set from Morrison and his rhythm section (which included his sons Harry and William on bass and guitar), the US vocalist arrived on stage with the elegant swagger he wears so well and launched into a relaxed, swinging version of Come Fly With Me.

Elling's notes blazed like sunshine streaming through an open window.

Like Morrison on trumpet (or whichever horn he chooses to pick up), Elling’s artistry is so highly developed that technical challenges seem to disappear. When the pair traded phrases on Billie’s Bounce, the singer matched Morrison’s astonishing dexterity note for note.

And on Speak No Evil, Elling demonstrated his remarkable gift for vocalese, interspersing rapid-fire lyrics with sustained single notes that blazed like sunshine streaming through an open window.

After a dynamic group finale that featured a muscular solo from saxophonist Troy Roberts, the co-leaders returned to the stage for an intimate duet. Morrison – now on piano – offered supple accompaniment as Elling stretched improvised syllables into imaginative shapes, providing an understated but memorable conclusion to a thoroughly entertaining show.

brilli, jazz, Make, Pair, Tireless
You may also like:

Selena Gomez Says She Has 'Learned So Much' About Herself During Quarantine: 'A Lot Has Changed'

The real meaning of Luke Bryan’s One Margarita explained