Four and a half stars 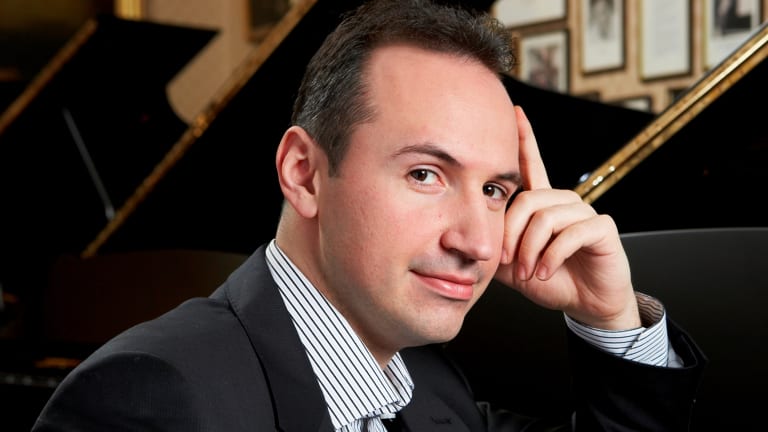 Simon Trpceski took on challenges beyond the purely technical – though they were considerable – in playing an arrangement by Paul Gilson of Rimsky-Korsakov’s tuneful tone poem Scheherazade as the culmination of his recital for the Sydney Symphony Orchestra's International Pianists series.

This much-loved work is prized for its seductive and exotic orchestral colour and a piano arrangement risks seeming like a black-and-white etching of a vivid canvas in oils. But Trpceski’s subtle command of intricate textures, his control of tonal colour on top of impressive virtuosic stamina and above all his imaginative focused musicality made this extended narrative as persuasive as Scheherazade’s Arabian Nights and as immune from summary critical execution.

Although Grieg’s Holberg Suite is also better known in the composer’s arrangement for string orchestra, Trpceski reminded us in the first half that it was originally for piano, sketching detailed pianistic textures to support melodious lines above and showing impressive velocity at the close. He played a selection from Mendelssohn’s Songs without words with natural and easeful musical expression.

At the SSO’s Meet the Music program, pianist Stephen Hough was, by turns, dry, matter of fact, deftly brittle, sardonic, dreamy, passionate and demonic in Rachmaninoff’s Rhapsody on a Theme of Paganini, Opus 43.

This was a masterly and original take on a work whose rhythmic tautness and subtleties are often lost in overblown Romantic excess. In honour of composer Ross Edwards' 75th birthday year, the orchestra revived his Symphony No. 2 Earth Spirit Songs.

Soprano Celeste Lazarenko projected the expressively smooth yet wide-ranging melody for the Gregorian text in the first movement with even balanced tones and admirable strength in the lower register. In Judith Wright’s powerful poem The Lost Man in the second movement, she sustained warmth amid glowing melodic stillness.

Conductor Julian Kuerti’s tempos for Mendelssohn’s Symphony No. 5 in D minor, Opus 107 Reformation were somewhat cautious for the first two movements but the slow movement brought out colour and strengths within the orchestra, while the final movement, a paraphrase on the Lutheran hymn Ein Feste Burg Ist Unser Gott, found its natural gait with rewarding splendour.