Follow
Home » Music » 'We travelled back in time there': Kylie and Jason reunite on London stage

'We travelled back in time there': Kylie and Jason reunite on London stage

Kylie Minogue has been joined on stage by her former Neighbours co-star Jason Donovan during her headline show in London's Hyde Park.

Minogue was top of the bill at BBC Radio 2 Live show on Sunday, where she performed her and Donovan's 1989 hit duet Especially For You.

Midway through the song Minogue said "I need a dance partner" and Donovan came out on stage, picked her up and spun her around. 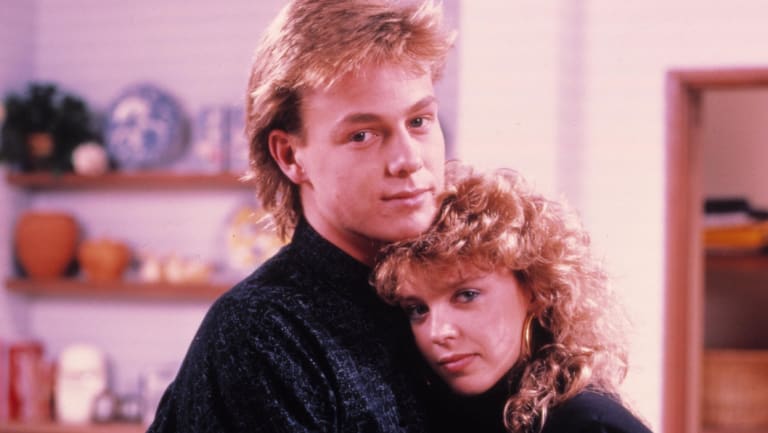 Jason Donovan and Kylie Minogue (Scott and Charlene) in their Neighbours heyday.

Minogue performed a few of her older hits during a brief technical difficulty treating the crowd to introductions from songs including Step Back In Time, Locomotion and I Should Be So Lucky.

After Donovan twirled her around on stage and the pair embraced, she told the audience: "Where do we go from there? I had no idea that was going to happen!

"Thank you Jason. We travelled back in time there."

Donovan later told his Twitter followers the moment was spontaneous.

"I literally turned up on my bike to support my friend Kylie Minogue and next thing you know I'm onstage at Hyde Park in front of 70,000 people recreating those dance moves," he tweeted. "Loved every second… Memories = magic."

Minogue also was joined by Rick Astley to sing his hit Never Gonna Give You Up and Kids, the duet she originally released with Robbie Williams.

She went on to thank her fans for sticking with her through "the ups, the downs, the middle of the road, the got it right, got it wrong".

back, in, Tim, travelled, We
You may also like:

A$AP Ferg Denies Being Kicked Out of A$AP Mob