"Wolf Alice are not just another indie band" proclaimed English music bible NME last year, on the release of the London four-piece's second album, Visions of a Life. 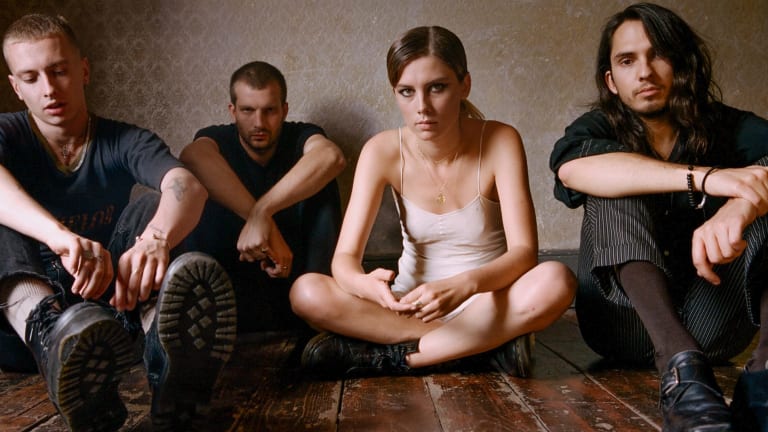 Wolf Alice write songs that take a U-turn when you least expect.

It's a debatable point, given the bedrock of their sound is firmly rooted in early-'90s British indie – full of swirling, effects-heavy guitar borrowing from shoegaze acts such as My Bloody Valentine, Ride and Slowdive.

But two things set Wolf Alice apart from the pack: the enchanting vocals of singer-guitarist Ellie Roswell, and the band's ability to craft songs that take a U-turn just when you think you've got them pegged.

Take Sadboy: galloping, folky chords switch into an anthemic grungy chorus that would do Courtney Love proud, followed by a slow murmured breakdown that then shape-shifts into a prog-rock riff-fest – four songs for the price of one.

It's tunes such as Planet Hunter, a sweet concoction of ethereal space rock and a gorgeous yet subtle vocal melody, and the shouty synth pop of Don't Delete the Kisses that move them into a more rarefied category – one that saw them win the UK's Mercury Prize for album of the year last week (over the likes of Arctic Monkeys and Florence + the Machine).

This show was their first since that win and bass player Theo Ellis, in particular, was on a high, bouncing around the stage and quaffing bubbly from the bottle, before passing it over to guitarist/keyboardist Joff Oddie and drummer Joel Amey.

While Oddie created a maelstrom of distortion and delay, Roswell was chiefly content to hold down the centre, alternately howling, crooning, murmuring or simply singing sweetly.

It wasn't until the last song that Roswell really let go, stepping off stage and into the well-mannered moshpit. Balancing on fans' hands and shoulders, she stood over the crowd, belting out Giant Peach with the ferocity of a Celtic warrior queen as her bandmates whipped up a final sonic squall.

And this was confirmation of the biggest take-away of the night: that while the band's two albums have a slick, polished surface, underneath the sheen is a musical beast that is definitely more Wolf than Alice.

Alice, av, not, review:, Wolf, Your
You may also like:

The Beatles songwriting: How one man turned down a song from John Lennon – ‘Stupid’

Rolling Stones lyrics: What do the lyrics in You Can’t Always Get What You Want mean?

Hear Liam Gallagher's Holiday-Inspired Song 'All You're Dreaming Of'