3D printers are TOXIC to humans and can cause lung damage

3D printers are TOXIC to humans as they emit tiny plastic particles that can cause lung damage — with children under nine most at risk, experts warn

Tiny plastic particles that can cause cancer are emitted by 3D printers — with such being the most toxic to children under the age of nine, experts have warned.

The global 3D printing market was worth an estimated £8.71 billion last year — a figure increasing as more people purchase printers for their own homes.

Researchers from the US, however, have found that the devices pose an unexpected health risk — in addition to their known contribution to plastic pollution.

During the hours it can take to complete a print, various particulates and chemical by-products can be released into the surrounding environment.

The findings are more concerning in light of the growing uptake of the devices in schools and libraries — along with recently use of 3D printers to make face shields. 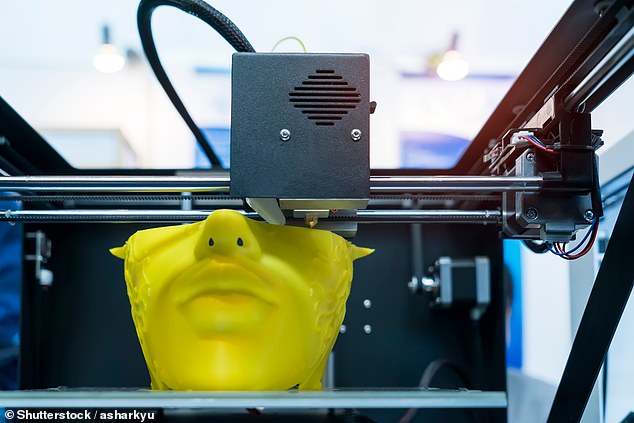 Tiny plastic particles that can cause cancer are emitted by 3D printers — with such being the most toxic to children under the age of nine, experts have warned.

In one study, the particles emitted from the high-tech printing machines were found to be able to penetrate deep into the lungs, where they damage human cells.

While another investigation found — by means of a simulation model — that children aged nine and under are particularly vulnerable to the chemicals released.

‘A potential societal benefit of this research is to increase public awareness of 3D printer emissions and of the possibly higher susceptibility of children.’

A recent study of the impacts of 3D printing, meanwhile, concluded that the decreasing costs associated with the fabrication technique is adding to the number of plastic producers presently polluting the planet.

Duke University chemical engineer Joana Marie Sipe developed a tool that can determine how manty plastic particles can be released by regular products due first to natural wear and tear, and subsequent degradation in the natural environment.

The so-called ‘Matrix Release Factor’ may be used to evaluate how much plastic and nanoparticles are released when someone chews a product, or when it breaks down in the ocean.

‘This research can help set regulations on how much nanomaterial fillers can be added to particular consumer products, based on their Matrix Release Factor value,’ explained Ms Sipe.

‘The data can help determine how much plastic and/or nano-filled products release contaminants into the environment or the human body.’

The full findings of the studies were presented at the 2020 Society for Risk Analysis annual meeting, which is being held virtually from December 13–17, 2020.