5,000-year-old stone tablet which was made in Iraq and contains a beer recipe as well as the ‘first ever signature’ has sold for £175,000

A 5,000-year-old clay tablet detailing beer ingredients and carrying the world’s ‘first ever autograph’ has sold for £175,000 at auction.

The tablet is said to be the earliest known record of any personal name in history – indicated by symbols translating as ‘KU’ and ‘SIM’ in the top left corner.

Experts interpret these as spelling the name ‘Kushim’, possibly that of the government scribe who made the recording on the tablet for admin purposes.

Other inscriptions on the object appear to depict how beer was produced at the Middle Eastern Inanna Temple in 3,100 BC and supposedly detail a beer-making transaction.

The process of transforming barley or corn into beer and transporting it to the brewhouse is illustrated with primitive depictions of grains and bottles.

The square 3-inch by 3 inch tablet, sold by London-based Bloomsbury Auctions, was made in the ancient city of Uruk, in modern day southern Iraq. 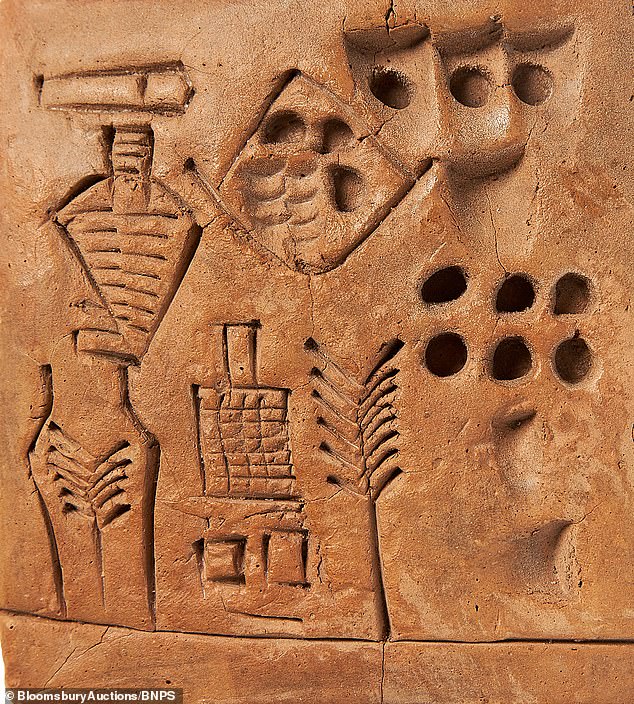 The tablet has a few hairline cracks but otherwise was regarded as in ‘outstanding’ condition. It’s signed ‘KU’ and ‘SIM’, indicated by two symbols in the top left corner – a horizontal rectangle divided into two sections and a downward pointing leaf directly beneath it

The tablet has a few hairline cracks but otherwise was regarded as in ‘outstanding’ condition.

It fetched almost double its estimate of £90,000 when it was sold with Bloomsbury Auctions.

‘One only gets a few chances to work with any item of such importance, marking a milestone in perhaps the most important human invention – writing,’ said Timothy Bolton, a specialist at Bloomsbury Auctions.

‘In addition, our names are important to us, they are a fundamental part of our identity and probably the first thing any child learns about itself.

‘Thus, it is a breathtaking thought that when you hold this item in the palm of your hand, you might hold the earliest record of a personal name.

‘We were delighted with the result, as well as pleased to be part of this piece passing from one important collection to another on its journey through the ages.’ 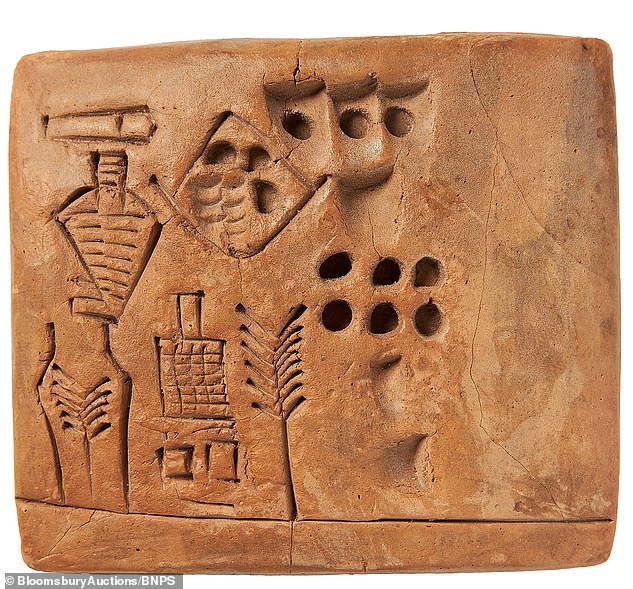 Tablet depicts the production of beer from barley or corn, and its placing within the brew-house, the brewery mark and other marks probably depicting numbers 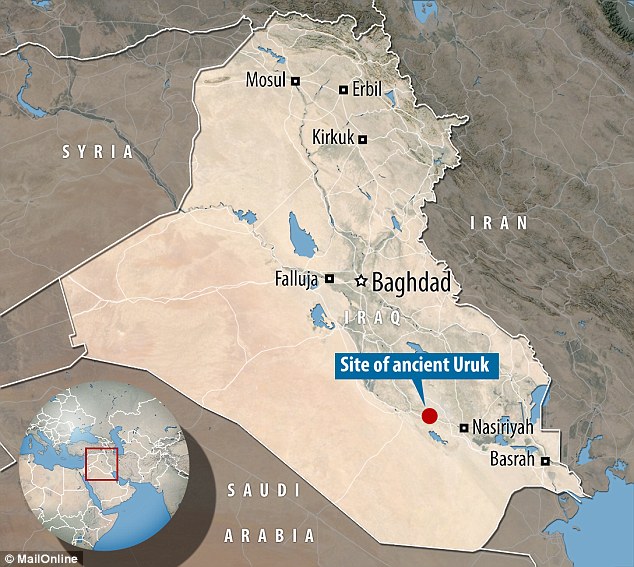 The tablet is part of The Schøyen Collection, a large and prodigious private collection of manuscripts, some dating back as far ago as 5,300 years.

‘This exceptionally fine, perfect, administrative tablet is not only the finest such tablet in The Schøyen Collection, but it also has claim to be the earliest known record of any personal name in history,’ said Bloomsbury.

Kushim is the earliest known example of a named person in writing, although some sources claim uncertainty of whether the name refers to a person or an institution.

On the tablet, ‘KU’ and ‘SIM’ is indicated by two symbols in the top left corner – a horizontal rectangle divided into two sections and a downward pointing leaf directly beneath it.

As noted by Y. N. Harari in Sapiens: A Brief History of Humankind, this apparent signature is simply evidence of a transaction between beer makers and suppliers.

Narari claims that the slab is a receipt for multiple shipments of barley and that it simply says ‘29,086 measures barley 37 months Kushim’. 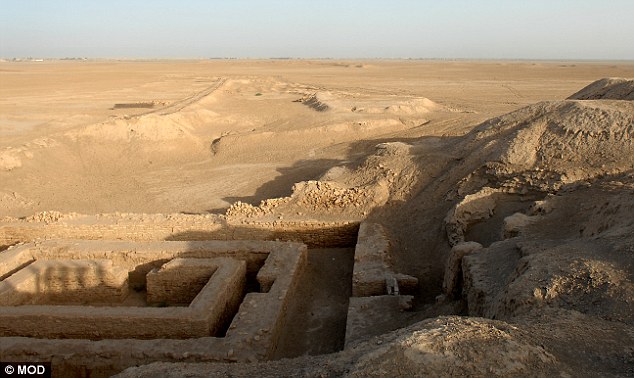 Uruk, where the tablet was found, is thought to have been one of the first cities to have emerged in the cradle of civilisation Mesopotamia. The ruins (pictured) now lie on what is known as Warka in modern Iraq 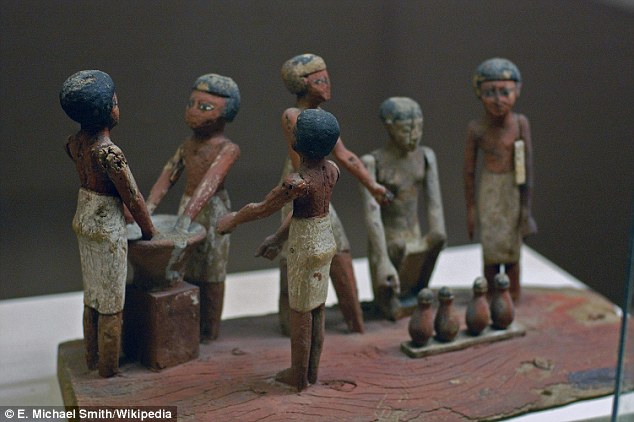 Beer was popular in the ancient world and was used to pay workers building the pryamids in ancient Egypt. The carving above depicts ancient Egyptians making beer

The symbols depict the entire industrial process of making beer, from an ear of barley or corn, to a brick-building with a chimney that might be the brewery itself and the barley or corn within a jar signifying the beer.

The dots and other impressions on the clay most likely indicate numbers and probably recorded the amounts of beer being produced.

Kushim is known from 17 other tablets, and in some of those addressed as ‘Sanga’ or temple administrator.

None of those, however, appear to be recorded in private ownership, contributing to the selling price of this item, which had been in a prominent Swiss collection since the 1950s.

Beer is one of the oldest drinks produced by humans, with barley beer being traced back to 5,000 BC in ancient Eygpt and Mesopotamia.

Brewers were often women and the alcoholic drink was sometimes used as antibiotic medicine.

WHAT WAS ANCIENT MESOPOTAMIA?

A historical area of the Middle-East that spans most of what is now known as Iraq but also stretched to include parts of Syria and Turkey.

The term ‘Mesopotamia’ comes from Greek, meaning ‘between two rivers’.

The two rivers that the name refers to are the Tigris river and the Euphrates.

Unlike many other empires (such as the Greeks and the Romans) Mesopotamia consisted of several different cultures and groups.

Mesopotamia should be more properly understood as a region that produced multiple empires and civilisations rather than any single civilisation.

Mesopotamia is an ancient region of the Middle-East that is most of modern-day Iraq and parts of other countries. They invented cities, the wheel and farming and gave women almost equal rights

Thought to be responsible for many early developments, it is also credited with the invention of the wheel.

They also gave the world the first mass domestication of animals, cultivated great swathes of land and invented tools and weaponry.

As well as these practical developments, the region saw the birth of wine, beer and demarcation of time into hours, minutes, and seconds.

It is thought that the fertile land between the two rivers allowed hunter-gathers a a comfortable existence which led to the agricultural revolution.

A common thread throughout the area was the equal treatment of women.

Women enjoyed nearly equal rights and could own land, file for divorce, own their own businesses, and make contracts in trade.