The lavish Pompeii home of an esteemed statesman and general has been identified by archaeologists, courtesy of graffiti scrawled on a wall by a young girl.

Archaeologists have been working to excavate the site and found the graffiti just 4.5ft (1.39m) above the ground on one of the villa’s interior walls.

It is thought she, like many rebellious children throughout history, indelibly etched her own name — ‘Mummia’ — on the surface.

This provides the scientists a plethora of clues as to the identity of the occupying family, as it was an ancient Roman custom to give daughters the female version of the surname as a first name, making this young child’s full name Mummia Mummius.

Academics say that this means the lavish villa, complete with stables — unearthed in 2018 with the remains of three well-bred horses — and slave quarters, may well have belonged to the family members, and possible descendants, of Lucius Mummius.

Lucius Mummius was a Roman general responsible for a savage and brutal campaign against Corinth in 146BC and conquering the Empire’s Mediterranean rival, Greece. 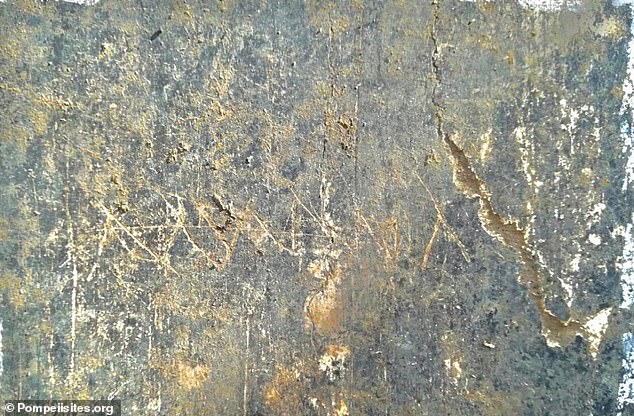 Archaeologists have been working to excavate the villa and found the graffiti just 4.5ft (1.39m) above the ground on one of the villa’s walls (pictured). It is believed a young girl, like many rebelling children throughout history, indelibly etched her own name — ‘mummia’ — on the surface. This could prove the villa was once owned by the family of the powerful Roman general Lucius Mummius who was responsible for conquering Greece in 146AD 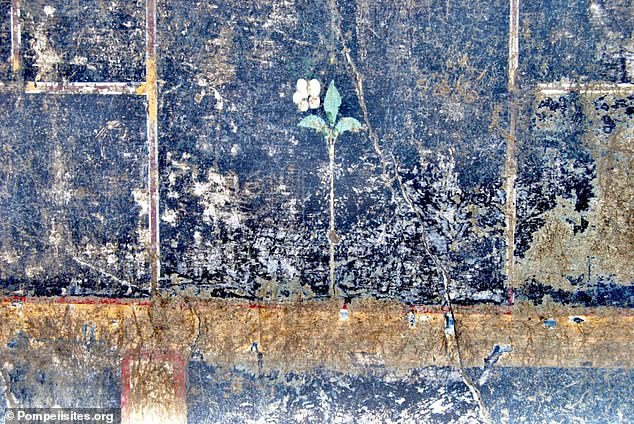 The researchers also found a white flower decorating a dark black wall (pictured) on one of the walls of the villa. The house and its grounds has been called Civita Giuliana

Role of Lucius Mummius in bringing Greece into the Roman Empire

Lucius Mummius was an established statesman and general n the Roman military.

He was in charge of subduing parts of what is now Spain in 154BC and awarded a triumph for his efforts.

Following this success as Praetor he was then elected as consul and put in charge of the Achaean War.

He swiftly defeated the Achean leader and marched on Corinth.

He wrought destruction and death to the city. All men were slaughtered, women and children sold into slavery and all valuables stolen.

The city was razed upon the exit of the soldiers.

The cruelty inflicted on the residents of the Greek city was demanded by the Roman senate, according to historical records.

Upon his return, he was awarded another triumph and honoured for his work.

The villa was partially destroyed by the earthquake that struck the area before Vesuvius erupted in 79AD, spewing thousands of tonnes of ash into the atmosphere, burying the surrounding areas.

Pyroclastic flows in excess of 500°C killed vast swathes of the population in Pompeii, and the nearby towns of Oplontis, and Stabiae, which were all buried under ash and rock fragments.

The neighbouring city of Herculaneum was also buried, but under a mudflow.

It is believed that, all told, almost 20,000 people perished in the fateful eruption of October 79AD.

In a statement provided online, the Archaeological Park of Pompeii says the villa probably belonged to a general or a very high military magistrate, perhaps even to the Mummius family.

Massimo Osanna, head of the excavation project, told The Times: ‘The graffiti is a first name in the female form and since it is only 1.39m [4.5ft] off the ground I believe it was left by a small girl.

‘We knew this very important Roman family had property in Rome but we had no idea they had a villa in Pompeii too.’

Further analysis is now underway to try and determine the true provenance of the writing, to see if there is any further proof that the villa belonged to the famed military general.

The researchers also found a white flower decorating a dark black wall on one of the walls of the villa. The house and its grounds have been called Civita Giuliana.

The villa was first excavated at the start of the 20th century, but the scattershot approach meant many of the findings were poorly documented, ended up in private collections or at the museum of Pompeii.

Historians have traditionally dated the disaster to Aug. 24 79 AD based on letters from Pliny the Younger.

But excavations on the vast site in southern Italy have unearthed a charcoal inscription written on a wall that includes a date which corresponds to Oct. 17.

The writing came from an area in a house that was apparently being renovated just before the nearby Mount Vesuvius erupted, burying Pompeii under a thick blanket of ash and rock.

‘Being charcoal, fragile and evanescent, which could not last a long time, it is more than likely that it was written in October 79 AD,’ said Massimo Osanna, head of the Pompeii site.

While not listing a year, the graffiti reads: ‘XVI K Nov,’ meaning the 16th day before the calends of November, or October 17 in the modern calendar.

Archaeologists found the inscription in a house that was in the process of being renovated at the time of the eruption, so the writing would have probably been covered with plaster shortly.

This museum collection was destroyed by Allied bombing in World War Two and, as a consequence, the priceless artefacts from the 2,200-year-old villa were destroyed.

Digging resumed in earnest in 2018, headed up by Mr Osanna.

The team discovered that some frescoes had already been pillaged by criminals but enough remained to showcase the extravagant wealth of the original owners.

Located just outside the walls of Pompeii in an affluent suburb, the villa was in an idyllic location, with terraces overlooking the nearby Bay of Naples and Capri island.

The team announced in 2018 that they had found the petrified remains of three horses, one of which was still wearing its saddle and another which was tied up at the time of the eruption, desperately trying to flee from imminent death.

The petrified animal was majestic, tall, well-groomed and had a saddle fitted with richly decorated bronze trimmings, experts found.

It was killed and instantly mummified by the preserving properties of the ash than entombed it.

The two non-harnessed stable-mates, which also perished in the wake of Vesuvius, were reduced to their skeleton.

At the time, archaeologists thought the villa belonged to a high-ranking military official, and the discovery of the graffiti has helped narrow it down.

Excavations in 2018 targeted the slave quarters and the stables and now the archaeologists have moved on to the family rooms of the estate.

The outbuildings are around 200ft away from the main villa and separated by a road.

Just last week, the researchers discovered an ornate floor and green walls, another sign of opulence as green was an expensive and hard to obtain pigment. 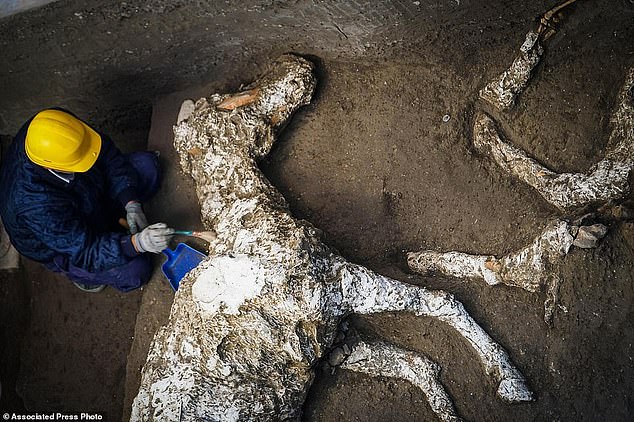 Located just outside the walls of Pompeii in an affluent suburb, the villa was in an idyllic location, with terraces overlooking the nearby Bay of Naples and Capri island. The team announced in 2018 that they had found the petrified remains of three horses (pictured, a petrified horse being analysed by archaeologists in 2018). 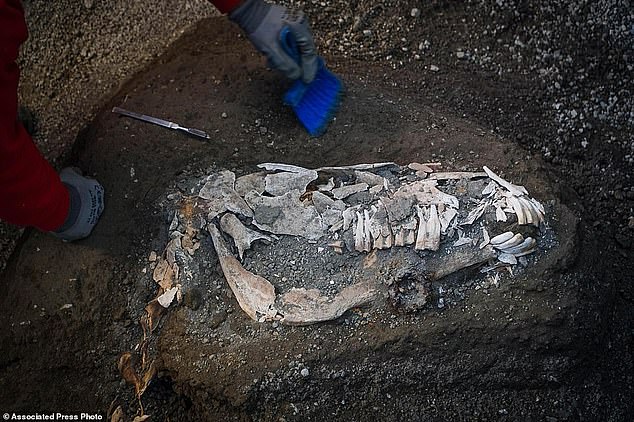 The harnessed horse was in excellent condition due to the preserving properties of the ash than entombed it. The non-harnessed individuals, which also perished in the wake of Vesuvius, were reduced to their skeleton (pictured)