Follow
Home » Science » A giant piece of moon will go on sale for an astronomical $500,000

Out of this world: Giant 12lb piece of lunar rock known as ‘The Moon Puzzle’ that crashed from space into the Sahara desert will go on sale for an astronomical $500,000

The 12lb (five kg) lunar meteorite is made of up of six fragments that can be pieced together like a jigsaw.

The hefty chunk of rock, unofficially known as ‘The Moon Puzzle’ due to its unique shape, was found last year in the Sahara desert.

It is one of the largest chunks of moon rock to go on sale publicly experts say, dwarfing similar items at auction that typically only weigh a few hundreds grams.

The largest part of the meteorite is an impressive six pounds (two kg) and it measures more than seven inches by five inches (17x12cm). 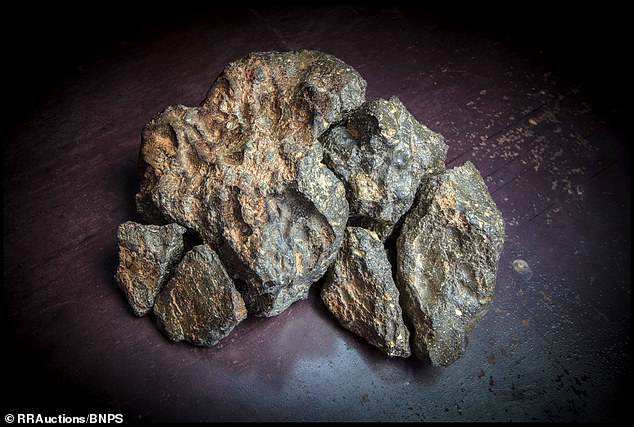 A huge piece of the moon which crashed down to Earth is being sold for £380,000 ($500,000). The 12lb (five kg) lunar meteorite is made of up six fragments which can be pieced together like a jigsaw

A meteorite expert described the rock as the most ‘significant’ of its kind to go on the market.

Geoff Notkin, chief executive of Aerolite Meteorites, who hosted the US TV show Meteorite Men, said: ‘This meteorite was blasted off the surface of our moon in the distant past, likely by the impact of a different meteorite, then journeyed the 250,000 miles to Earth.

‘Against all the odds, it survived a fiery descent through our atmosphere to be found in the wilds of the deserts of North West Africa in 2017.

‘Few, if any, of the world’s top museums have a lunar meteorite that is anywhere near this in size and uniqueness.

‘Without a doubt, this is one of the most important meteorites available for acquisition anywhere in the world today.

‘It is perhaps the most significant example of our nearest celestial neighbour ever offered for sale in the history of meteorite science.’ 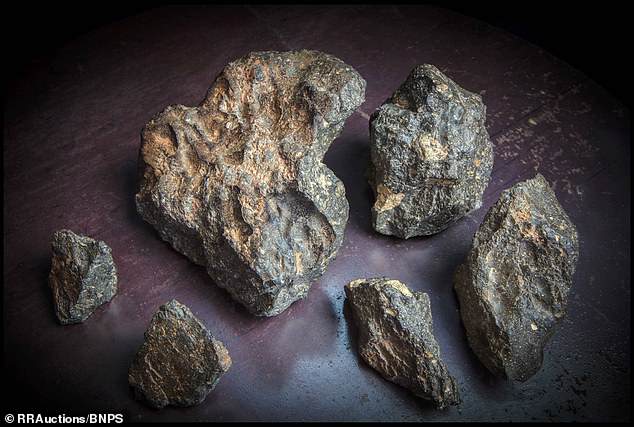 The hefty chunk of rock, unofficially known as ‘The Moon Puzzle’, was found after it plummeted in the Sahara desert last year. It is one of the largest chunks of moon rock to go on sale and those that come to auction typically only weigh a few hundreds grams 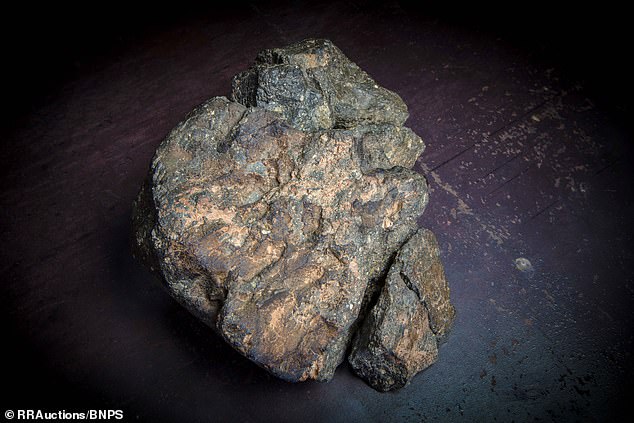 ‘It is, without a doubt, one of the largest lunar meteorites to be put up for public auction.’

The timed auction ends on October 18.

While it is unknown how old the ‘Moon Puzzle’ rock is, research carried out a few years ago suggests that the moon formed around 4.51 billion years ago, which is just 60 million years after the solar system formed.

There had been contradictory evidence which suggested the moon formed between 150 to 200 million years after the solar system was born.

The new findings were published in the Sciences Advances journal on January 11, 2017.

The oldest of the lunar meteorites is around 20 million years old, although most would have been ejected in the past hundreds of thousands of years.

The most common cause is being struck by another piece of space rock.

a, astron, Giant, Moon, piece, sale
You may also like: