Hello sunshine! NASA probe gets closer to the Sun than any other spacecraft, helping scientists uncover the secrets of solar winds

A NASA probe, which has ventured closer to the sun than any other human-made object, is sending back data that could help scientists learn more about solar winds.

The car-sized Parker Solar Probe, which blasted off from Earth on August 12, 2018, has made three solar orbits so far, and is around 15million miles away from the Sun.

Its mission is to help scientists unlock the mysteries of the Sun’s scorching atmosphere and answer questions on solar winds and the corona’s temperature. 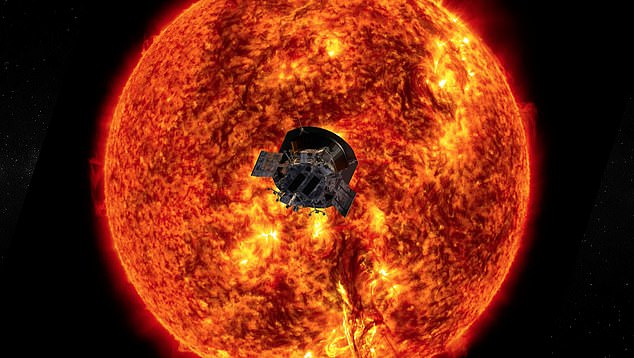 Nour E. Raouafi, project scientist for Parker Solar Probe at the Johns Hopkins Applied Physics Laboratory in Laurel, Maryland, which built and manages the mission for NASA, said: ‘The Sun has fascinated humanity for our entire existence.’

‘We’ve learned a great deal about our star in the past several decades, but we really needed a mission like Parker Solar Probe to go into the Sun’s atmosphere.’

‘It’s only there that we can really learn the details of these complex solar processes. And what we’ve learned in just these three solar orbits alone has changed a lot of what we know about the Sun.’

In a series of papers published in the journal Nature, researchers say the spacecraft has provided the closest view of the corona so far.

Previous missions have shown that solar wind – energetic particles that constantly stream away from the Sun – is accelerated as it leaves the corona, but it has not been clear how this happens.

These accelerated particles are also responsible for generating the Northern and Southern Lights when they come into contact with Earth’s magnetic field.

In one of the new papers, scientists report that changes in the Sun’s magnetic fields increase the speed of the solar wind flowing away from the star – higher than those predicted in previous studies. 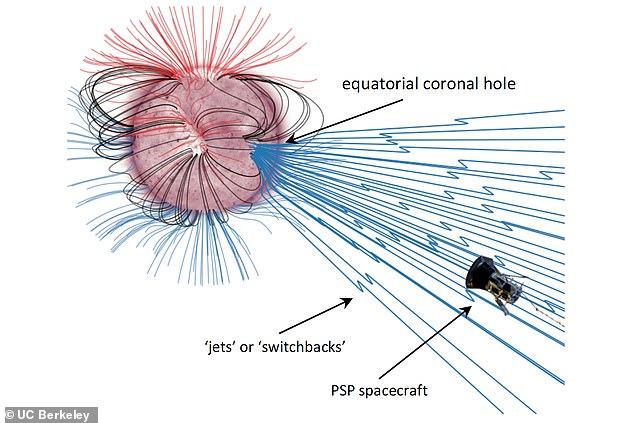 This graphic shows the encounter the Parker Space Probe had when examining a small coronal hole along the Sun’s equator. The solar surface is coloured to show extreme ultraviolet emission and coronal holes appear as a lighter shade

Another paper focuses on the source of so-called ‘slow’ solar wind – with speeds less than 310 miles per second – which until now has been poorly understood.

The researchers found that slow wind originates in holes in the corona found near the equator.

These holes, the scientists say, are cooler and less dense than the surrounding corona.

Justin Kasper, principal investigator for SWEAP — short for Solar Wind Electrons Alphas and Protons — at the University of Michigan in Ann Arbor, explained: ‘Waves have been seen in the solar wind from the start of the space age, and we assumed that closer to the Sun the waves would get stronger, but we were not expecting to see them organize into these coherent structured velocity spikes.’

‘We are detecting remnants of structures from the Sun being hurled into space and violently changing the organization of the flows and magnetic field. This will dramatically change our theories for how the corona and solar wind are being heated.’

The probe has been enduring some of the most brutal conditions.

Those include cosmic radiation 500 times more powerful than radiation on Earth and temperatures of 2,400°F.

Over the next five years the probe will continue to make new discoveries as it moves closer to the Sun, eventually making its closest approach in the year 2024, as it flies 3.9 million miles above the solar surface. 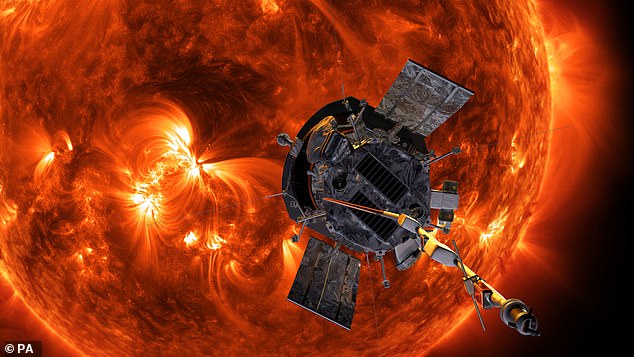 ver the next five years the probe will continue to make new discoveries as it moves closer to the Sun, eventually making its closest approach in the year 2024, as it flies 3.9 million miles above the solar surface

The last time a man-made object came close to the star’s surface was in 1976 when Helios 2 achieved perihelion, point of the orbit at which it was closest to the Sun, at 27 million miles.

For comparison, the average distance between Mercury and the Sun is about 36 million miles.

One of the main goals of the Parker Solar Probe is to discover the source of the ‘slow’ solar wind and how it is accelerated in the hot atmosphere of the sun.

‘The first three encounters of the solar probe have been spectacular’, said Stuart Bale, a professor of physics at University of California, Berkeley.

The ‘fast’ solar wind, clocked at between 310 and 600 miles per second, is known to come from large holes in the solar corona at the sun’s north and south poles.

The origin of the ‘slow’ solar wind, which is denser but about half the speed of the ‘fast’ solar wind, is more poorly understood.

‘We can see the magnetic structure of the corona, which tells us that the solar wind is emerging from small coronal holes’, said Dr Bale.

‘We see impulsive activity, large jets or switchbacks which we think are related to the origin of the solar wind; we see instability — the gas itself is unstable and is generating waves on its own.

‘We are also surprised by the ferocity of the dust environment in the inner heliosphere.’ 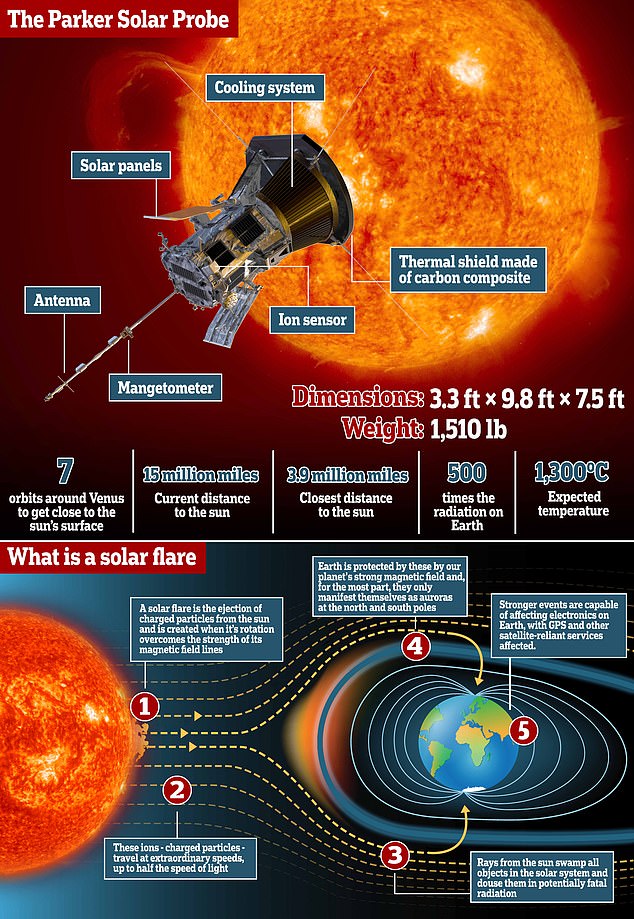 The more solar physicists understand about the magnetic environment of the sun and how it sends solar wind particles toward the planets, the better they will be able to predict events and prevent damage’, according to Dr Bale.

‘There was a major space weather event in 1859 that blew out telegraph networks on Earth and one in 1972 that set off naval mines in North Vietnam, just from the electrical currents generated by the solar storm.

‘We’re much more of a technological society than we were in 1972, the communications networks and the power grid on Earth are extraordinarily complex, so big disturbances from the sun are potentially a very serious thing.

‘If we could predict space weather, we could shut down or isolate parts of the power grid, or shut down satellite systems that might be vulnerable.’

The Sun’s outermost atmosphere generates an outflow of plasma particles called the solar wind. This graphic illustrates a theory that that the magnestic field lines coming from the Sun contain S-shaped bends and that the Sun releases blobs of plasma that form part of the young solar wind

The way coronal plasma seems to rotate and the dynamics of near-sun solar wind are important paces of information to come from the data, according to Gary Zank from the University of Alabama Huntsville.

‘The first surprise is related to the co-rotation of the coronal plasma as the sun rotates,’ says Dr Zank, who wrote one of four papers on the NASA data.

‘The sun emits a supersonic wind and so some level of rotational flow has always been expected in the solar wind near the sun.

‘This is because the magnetic tension in the corona should force the plasma to rotate as the sun spins.’

The large rotational velocities measured by the probe greatly exceed the value expected from models of the solar wind, he says. 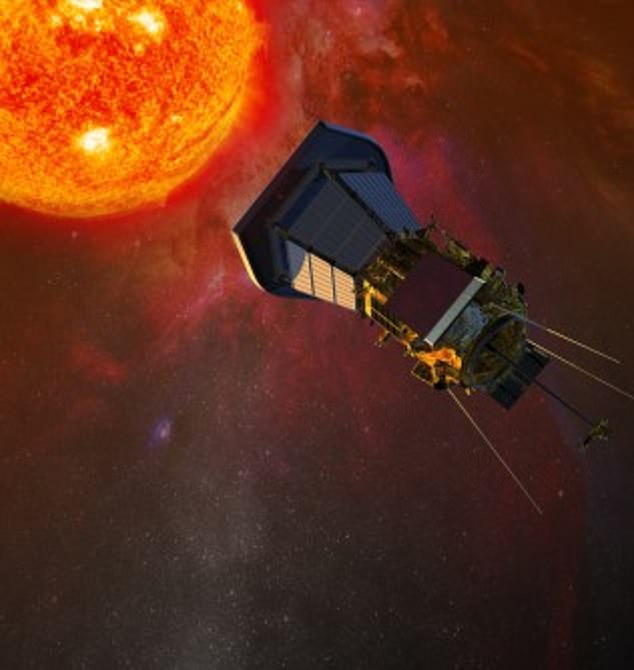 The way coronal plasma seems to rotate and the dynamics of near-sun solar wind are important pieces of information to come from the data, according to Gary Zank from the University of Alabama Huntsville

During its scorching journey, the probe will orbit the Sun 24 times while being subjected to extreme heat and radiation, with temperatures expected to reach 1,377C, nearly hot enough to melt steel.

As it gets closer to the Sun, the probe is expected to hurtle around the star at 430,000 miles an hour, which will make it faster than any spacecraft in history.

‘Studying the solar wind from Earth is like studying the source of a waterfall from near the bottom, where the turbulence obscures what’s happening at the top’, said Dr Bale on why the Parker probe is so important to science.

‘Now, with the Parker Solar Probe, we are getting closer and closer to the top of the waterfall, and we can see that there is underlying structure,’ he said.

NASA released all of the data collected by the Parker probe’s first two orbits of the Sun earlier in November, inviting anyone with an interest to study the information.

‘Releasing this data to the public will allow them not only to contribute to the success of the mission, but also to raise the opportunity for new discoveries to the next level’, said Parker Solar Probe Project Scientist Nour E. Raouafi.

WHAT IS NASA’S PARKER SOLAR PROBE? 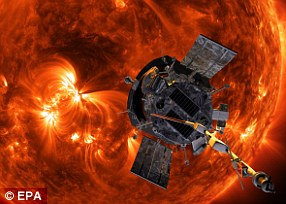 Nasa’s Parker Solar Probe (PSP) will travel seven times closer to the sun than any spacecraft before it by the end of its mission.

It launched from Cape Canaveral, Florida, atop a United Launch Alliance Atlas V rocket on August 12 2018.

The probe flew to the sun’s outer atmosphere to study life of stars and their weather events.

It is hoped that PSP can help scientists to better understand solar flares – brief eruptions of intense high-energy radiation from the sun’s surface that can knock out communications on Earth.

Over the next five years the probe will continue to make new discoveries as it moves closer to the Sun, eventually making its closest approach in the year 2024, as it flies 3.9 million miles above the solar surface.

The craft faces extremes in heat and radiation and will reach speeds of up to 430,000 miles per hour (700,000 kph) at its closest flyby of the star.

The craft’s kit includes a white light imager called Whisper, which will take images of solar waves as the craft propels through them at high speeds.

To measure the ‘bulk plasma’ of solar winds – described by Nasa as the ‘bread and butter’ of the flares – a set of magnetic imaging equipment will also be stored on board. 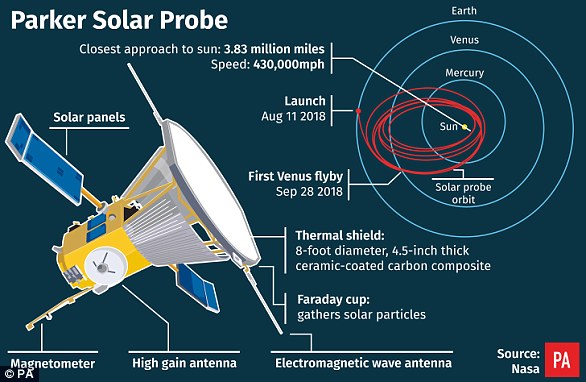 a, helps, Nasa, probe, scien, solar
You may also like: